The Left and the Media(D) — but I repeat myself — are always telling us that President Trump and, by extension his supporters, are racist, neo-Nazi, white supremacist bigots… and also very, very bad people.

The Media(D) will point to the rise in hate crimes under this administration!

And who could forget Jussie Smollett’s harrowing experience with Trump supporting Empire fans carrying bleach and a noose in the middle of the night in downtown Chicago during the Polar Vortex?

Oh, wait. Those were all completely fabricated and blamed on Trump supporters.

Maybe it’s the Media(D)’s malfeasance pushing the narrative that America is deeply, deeply racist that is the real issue here.

That’s why these things keep happening to folks wearing MAGA hats, which the Media(D) is loathe to report.

This story is getting some Media(D) attention because of who the victim is — a 74-year old Jewish man. Victor (last name withheld) was grabbing a cup o’ Joe at a Starbucks when he was shouted at and shamed for daring to wear a MAGA hat in public.

Rebecca Mankey, from Palo Alto, California, allegedly branded the 74-year-old Jewish Trump supporter ‘racist’ and a ‘Nazi’ before boasting about her attack online.

Mankey, admitted in a long Facebook post that she shouted at Victor and called for anyone who saw the man to ‘please confront him.’

The post was spotted by her boss which eventually led to Mankey losing her job.

Mankey’s now-deleted Facebook post shows just how much the Media(D)’s rampant bias, deliberate misquoting of President Trump, and branding him and his supporters as bigoted ‘istophobic phobophobes’ (to borrow a phrase from Dan Bongino) has fed into the fever dreams of the #Resist crowd. Her post is a lament that others in a full Starbucks didn’t speak up about the descent into ‘facism’ by yelling and humiliating an old man wearing a hat that says, ‘Make America Great Again.’ 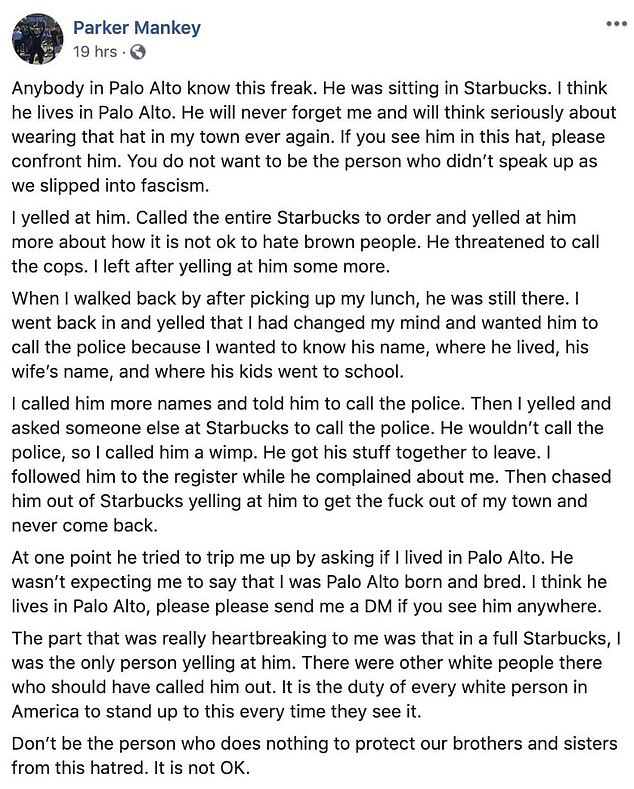 Mankey wanted him doxxed, put a target on his back, and have him and his family harassed wherever they went. It’s totally in line with the Maxine Waters School of Public Discourse.

‘This woman came over and not only started screaming at me, she turned to the Starbucks audience and said, ‘Hey everybody come here! This guy’s a racist! This guy hates brown people!.’

Victor, was wearing a yarmulke on his head under his MAGA hat, claimed that the woman also called him a Nazi.

He added, ‘If you can’t tell the difference between a Make America Great Again hat and a hat that’s a Nazi hat or a Ku Klux Klan hat, I would say you are deranged.’

Even though Victor didn’t call the police as his harasser had goaded him to, there was a pretty severe consequence for Mankey — she was fired from her job. Mankey’s boss, Richard Johnson, had known her since grade school but said that her behavior conflicts with his own values so he had to let her go.

Palo Alto police said both parties did not file a report on the incident. But Mankey was fired from her job at Gryphon Strings, a guitar sales and repair shop, after the store owner was made aware of the incident.

‘Gryphon does not believe anyone should be harassed or subject to hate speech no matter their beliefs.

‘Music has historically been something that has brought people of diverse socio-political backgrounds together,’ the store said in a statement earlier this week.

‘We would like to make it clear that the opinions expressed and actions taken by the employee are not indicative of how we conduct ourselves at the shop and we hope we can continue to serve our customers across the country respectfully and universally as we have done for nearly 50 years.’

Also, it’s probably not a good idea to call a Jewish man a Nazi. Just sayin’.