President Roosevelt introduced the singer to King George VI of England this way, “This is Kate Smith. Miss Smith is America.”

Kate Smith was dubbed the “Songbird of the South” and was the single most popular female vocalist of her time. Smith’s radio show had over 15,000 broadcasts and was the anchor for many during World War II. She singlehandedly made the Irving Berlin song, God Bless America the classic that it now is. It’s her resounding contralto voice that we all know singing that song. That’s because Irving Berlin wrote the song specifically for Smith.

Kate Smith had been a national singing star almost from the outset of her broadcasting career in 1931. But her identification with patriotism and patriotic themes dates from the night of Nov. 11, 1938, when, on her regular radio program, she introduced a new song written expressly for her by Irving Berlin – ”God Bless America.”

For a time, she held the exclusive rights to sing it in public but relinquished them when it became apparent that the song wasn’t the usual pop song. For a time, it was a more popular patriotic tune than The Star Spangled Banner, and there was even a push that the national anthem be changed to God Bless America.

Her obituary also states that both Smith and Berlin had waived all royalties from performances of God Bless America and they were donated to the Boy and Girl Scouts of America.

But now, the New York Yankees won’t be playing Smith’s version during the Seventh Inning Stretch, and the Philadelphia Flyers are covering up a statue of the songstress that is in front of their arena.

“We have recently become aware that several songs performed by Kate Smith contain offensive lyrics that do not reflect our values as an organization,” the Flyers said in a statement to CNN.

“As we continue to look into this serious matter, we are removing Kate Smith’s recording of ‘God Bless America’ from our library and covering up the statue that stands outside of our arena.”

The Yankees said the team also was no longer playing Smith’s iconic 1939 version of the song. It had been a fixture at games since the September 11, 2001, attacks, the team said. It got pulled three games into the season on April 1.

Here is how she introduced the song back in 1938:

This year, with the war clouds of Europe so lately threatening the peace of the entire world, I felt I wanted to do something special – something that would not only be a memorial to our soldiers – but would also emphasize just how much America means to each and every one of us … The song is ‘God Bless America’; the composer, Mr. Irving Berlin. When I first tried it over, I felt, here is a song that will be timeless – it will never die – others will thrill to its beauty long after we are gone. In my humble estimation, this is the greatest song Irving Berlin has ever composed … As I stand before the microphone and sing it with all my heart, I’ll be thinking of our veterans and I’ll be praying with every breath I draw that we shall never have another war… — KS introducing “God Bless America” on her radio show, Armistice Day, November 11, 1938

Here is a clip of Smith singing the Irving Berlin classic in the variety show, In The Army as she did on Armistice Day. (Incidentally, the cast of In The Army includes a young Ronald Reagan.)

Smith, who died in 1986, was still singing the classic at Philadelphia Flyers games including at the 1974 Stanley Cup Playoffs.

She could still belt it out nearly 40 years later — and she never had a formal music lesson in her life:

So, in the era of “everything is racist” (including libraries,) how bad are the songs, you may ask?

One of them is her 1931 rendition of “That’s Why Darkies Were Born,” which has lyrics that read:

The other is her 1933 recording, “Pickaninny Heaven,” which asks “colored children” living in an orphanage to dream about a magical place “great big watermelons.”

And even worse, the song, Pickaninny Heaven, was featured in the 1933 movie, Hello, Everybody and Smith, playing herself, dedicated the song to “a lot of little colored children who are listening in an orphanage in New York City.”

But two songs which Smith recorded — one of which she didn’t even write, and it’s unclear about the other one — are enough to erase her legacy?

Smith did much more than just record songs. According to her New York Times obituary, she used her radio show to raise money for the war effort.

At the height of her career, during World War II, she repeatedly was named one of the three or four most popular women in America. No single show-business figure even approached her as a seller of War Bonds during World War II. In one 18-hour stint on the CBS radio network, Miss Smith sold $107 million worth of war bonds, which were issued by the United States Government to finance the war effort. Her total for a series of marathon broadcasts was over $600 million.

So, this patriotic woman who not only raised over a half-billion dollars in the 1940s to defeat the Nazis is now being erased from the annals of history for two recordings out of almost 3,000.

Here’s the statue of Smith outside the Flyer’s arena: 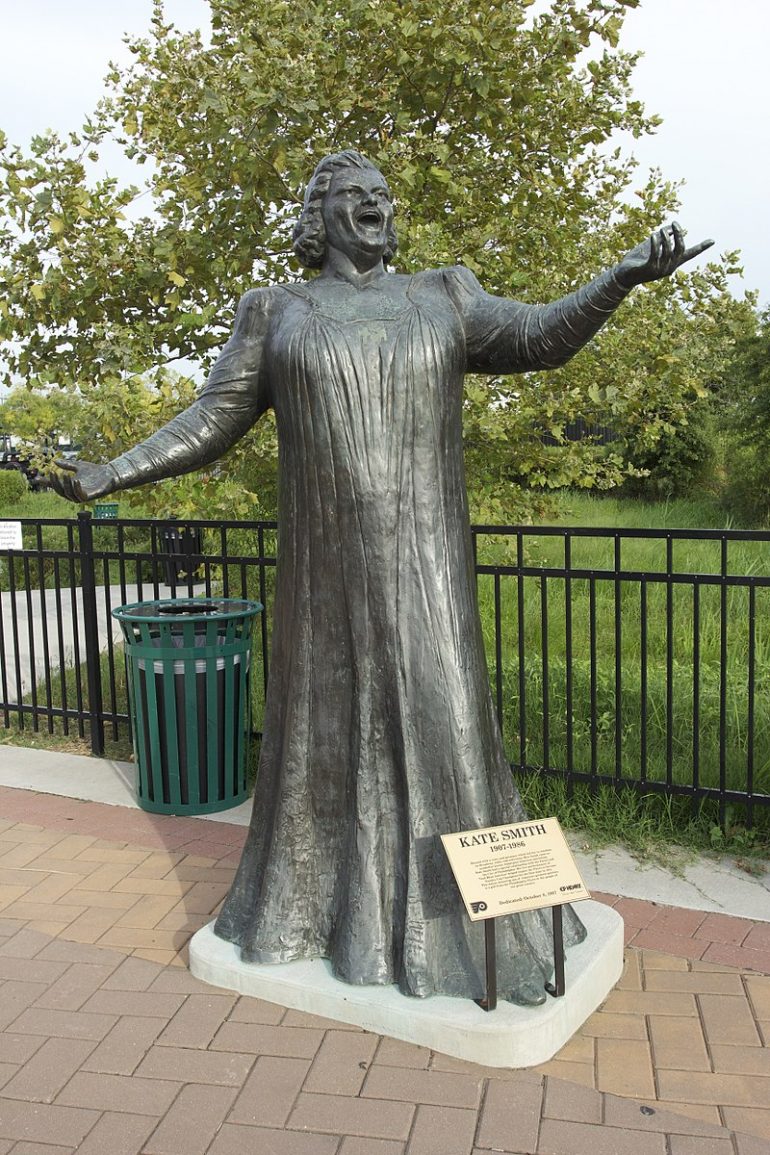 Now her statue looks like it’s wearing a burka.

#Breaking: The statue of Kate Smith outside Xfinity Live! is now draped in black amid allegations of racism connected to the Flyers singer. https://t.co/CkpnXMADtT pic.twitter.com/pzcfIdkerA

I have a novel idea: How about we condemn the two songs as racist and still acknowledge the tremendous influence of God Bless America and Kate Smith as an individual and a patriot?

This idea that we should be digging into every person’s past and finding things that are offensive to whatever the current trends are is tiresome and neverending.

Why won’t these same new Puritans condemn Obama and Hillary for their 2008 stance on traditional marriage? Simple — because they claim that they’ve both “evolved” on the issue.

But we can’t ask Kate Smith if she changed her views since 1933 can we? No, because she’s dead.

It’s also ridiculous because it’s not like anyone was revering Smith for her racist songs.

I’m sure a lot of Americans dramatically changed their stance on the issue of racism after the Civil Rights Movement in the 1960s. It’s obvious by our present diverse and inclusive society.

Whenever I walk into a library that is organized according to the Dewey Decimal System, I angrily inform the librarian that Melvil Dewey was a serial sexual harasser and a notorious anti-semite. Then I go around the library and throw all the books on the floor. https://t.co/pmhf3gg2wF

In a Starbucks bathroom, I was shocked to see a urinal. This is a device popularized by the Roman emperor Vespasian, the same beast who led a war of extermination against Judea. I'd visited the bathroom to pee, not to celebrate the Holocaust. So I used the umbrella stand instead

As I was finishing up, the manager asked if I was in crisis. I said the only "crisis" is that his Starbucks is a HATEbucks. Companies need to be held accountable. So I went on TripAdvisor & said the floor was soaked with urine. Which was true. The umbrella stand had a mesh bottom

If this continues, it won’t be long before the ones pushing for censorship are censored themselves.

Remind me, do they still play clips of contemporary music at sporting events? Just wait until they hear what rappers have said about women!