She’s got ties to a “dark money” group that is attempting to rebrand Democrats as moderates.

According to Politico @Alyssa_Milano is aligned with Future Majority who is trying to rebrand the Democrats as moderate. She is a tool to try & fool those who care what Hollywood activists have to say. /1https://t.co/YFb0j2PkoQ

A group of Democratic operatives are launching a $60 million political group with plans to reclaim values-laden terms like “freedom” and “opportunity” for their party ahead of the 2020 election.

The nonprofit organization, called Future Majority, plans to provide strategic advice to other Democratic groups, as well as branding efforts, communications and a “war room” that will debunk fake news and counter conservative social media. The group quietly soft-launched during the 2018 midterms and advised organizations including the Democratic Congressional Campaign Committee on how to message to voters.

It’s interesting since Joe Biden literally launched his campaign on the lie that President Trump’s comments about “fine people on both sides” in reference to the Charlottesville riots in August 2017 included white supremacists and neo-Nazis. President Trump specifically excluded them.

I’m sure Future Majority will get lots of help from Social Media(D) in achieving their goals to combat “fake news” — i.e. suppressing dissenting opinion.

According to Politico, Future Majority is a 501(c)(4) group so they don’t have to reveal who their donors are and can legally limit the disclosure of how money is spent.

Future Majority’s formation also highlights tensions within the Democratic Party over how to navigate money in politics in the 2020 election. The group will spend money through PACs but is initially organized as a 501(c)(4) political nonprofit — known to critics, including many Democrats, as “dark money,” with no disclosure of donors and limited disclosure of how money is spent. And while Democratic presidential candidates are clamoring for campaign finance reform and voluntarily limiting their own fundraising, all signs point to the party as a whole spending record sums of money through all sorts of groups as they try to unseat President Donald Trump.

So, the Democrats that are continually pushing for campaign finance reform and increased transparency are going to rely on “dark money” to attempt to defeat Trump in 2020? That’s not going to look very good for them.

Future Majority has had no official public presence until now, but it has been active for months, testing its strategy by releasing and advertising videos, advising Democratic organizations and enlisting personalities like actress Alyssa Milano to share its content on social media.

The issue that Future Majority was pushing for Alyssa Milano was a House Resolution on campaign finance reform. 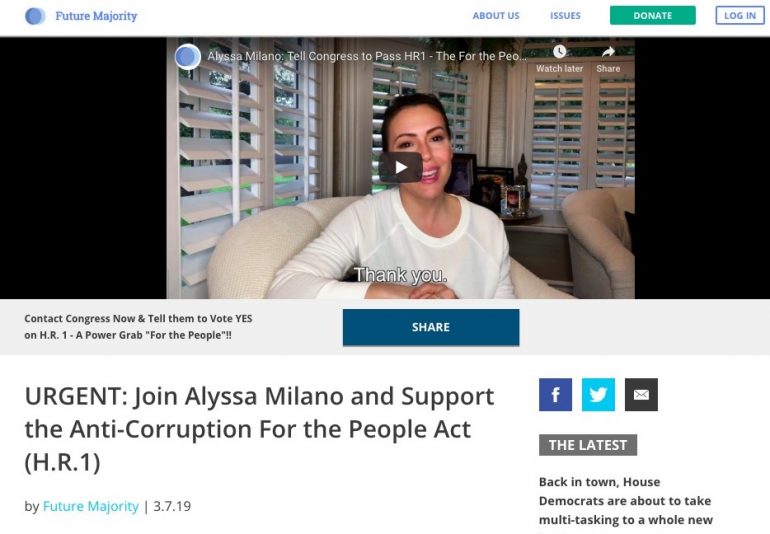 Future Majority was part of the push in the 2018 midterms to brand some Democrats as “moderates.” One of their memos from 2019 states that one goal is to reclaim the words “freedom” and “opportunity” for the Democrats. So, they’re not going to support a candidate that is running on full-blown socialism, (like Bernie,) and the vast majority of the rest of the candidates, for that matter. Biden is their guy.

But Biden had been called out by the #MeToo peeps for his creepiness with touching women and girls.

There are compilation videos on YouTube of Biden hugging, kissing, and smelling the hair of females of all ages while they stand there looking incredibly uncomfortable. This touching is obviously unwanted. So how does the #MeToo activist reconcile her support for Joe Biden who has been mocked for years in conservative circles for his creepy handsy ways with women and young girls?

Simple — she spoke to him and he’s “willing to learn.”

Watch her on MSNBC defend Biden’s creepiness and her own potentially problematic behavior:

.@Alyssa_Milano defends Biden: "He was raised in a family that was super affectionate."

Adds she knows what it's like: "I walked onto set a few weeks ago and I kissed our prop guy on the arm. And I had this moment of, like, maybe that made him uncomfortable." pic.twitter.com/KRbWJiQExU

Rule #1: Don’t trust people that use the word “super” as an adverb as Milano does right there. They’re generally dense. (Alexandria Occasional-Cortex does this, by the way, so that’s enough reason to not follow suit.)

Oh, so we’re supposed to listen to the man’s perspective and not just #BelieveAllWomen? Funny that she didn’t believe that in October during the Kavanaugh witch hunt. Milano was adamant that the accusations by Professor Christine Blasey Ford, Deborah Ramirez, and even the ridiculous claim by Michael Avenatti’s client, Julie Swetnick, were enough to bar Justice Kavanaugh from the Supreme Court.

Here she is talking to the Second Dumbest Man on Television™, Chris Cuomo, about “feeling Kavanaugh’s rage” when she was there during the hearing. Really? He was angry was he? Was he supposed to just accept that his career and reputation were destroyed by an accusation of rape almost 40 years ago that his own accuser couldn’t keep straight? Was he supposed to keep a level head as he was accused of running a gang rape ring where there were zero witnesses despite the claim that this occurred multiple times at house parties? Note that Milano mentions alleged “millions of dollars the NRA put behind him,” as well as railing against “double standards.”

Let’s face it — Milano’s elevator doesn’t seem to go to the top floor.

Milano is an activist — and not a very bright one at that.

She’s railed against “thoughts and prayers” for the victims of Hurricane Harvey.

Quality Of Life In US Is Going Down The Toilet
March 3rd, 2021 Sons of Liberty Media