I’ve gotta get me one of these! Wait until you see what’s on the back!

How much do you love that Sen. Mitch McConnell has embraced the nickname given to him by the failed Republican rival of Sen. Joe Manchin(D-WV)?

When Team Mitch posted a photoshop of McConnell as Pablo Escobar, the criminal mastermind in the Netflix show, Narcos, it was wildly popular — especially with younger conservatives. It made the unassuming Senate Majority Leader from Kentucky more relatable and likable by revealing a sense of humor. McConnell wasn’t so “turtle-y” and droning — he could actually make a joke.

The official re-election campaign for Mitch McConnell has decided to embrace the nickname for his 2020 run.

McConnell’s team then photoshopped an image of the Kentucky senator on a poster for the Netflix series “Narcos” after Blankenship lost the race to incumbent Sen. Joe Manchin, D-W.Va.

The front of the shirt looks like promotional merch for Netflix’s Narcos, with a silhouette of Sen. McConnell, his name “MITCH” in all-caps and a cloud of “cocaine” behind him. The back reads, “Team Mitch Cartel Member.” You can get the shirt for a $35 donation to the Mitch McConnell campaign.

A year ago, a legend was born. Own your piece of history. #CocaineMitch

Become an official member of the Cartel! pic.twitter.com/NldVtTeJgj

Frankly, it was just a few years ago, that many Republicans couldn’t tell which side of the aisle Sen. McConnell was on. He was “squishy.” He’d ticked off many in the GOP by blocking a bill to defund Planned Parenthood and one that would have supported Kate’s Law.

And then Donald J. Trump got elected.

I’m not sure what the hell happened exactly, but Sen. Mitch McConnell, (much like Sen. Lindsey Graham 2.0,) has changed dramatically. They’re not acting like geldings anymore.

Since the beginning of the Trump administration, he has been a leader on some key issues:

From squish to steel is quite the transformation.

As if anyone who took even a cursory glance at the Senate Majority Leader’s record would believe that he would endorse drug use — this is clearly mocking a really absurd political move by a failed rival.  Welcome to the age where memes rule. And this is one helluva meme.

Just look at what someone did… they photoshopped the face of President Obama’s SCOTUS pick, Merrick Garland, onto a model wearing the “Cocaine Mitch” shirt.

That is effing hilarious!

I don’t know about you, but I’m McLovin’ the new McConnell in the Trump era!

Just like I had Grahambo’s pic as my phone’s lockscreen for a while after the Kavanaugh confirmation: 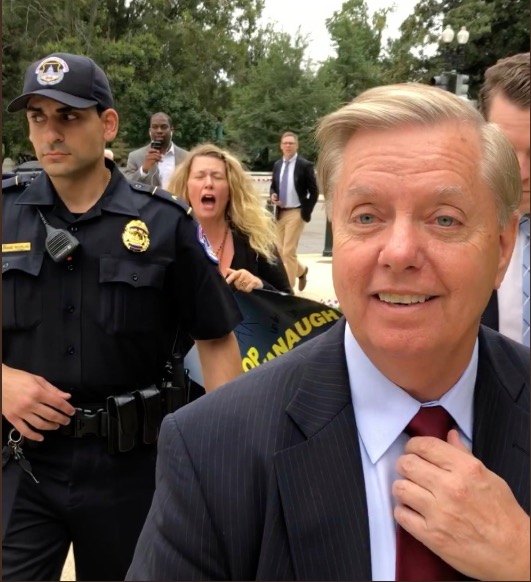