As Barr himself said, we KNOW there was spying. Now we need to know whether their reasons for doing were justifiable. Were the NeverTrumpers so confident their plan to defeat or hamstring DJT would succeed that they didn’t stop to contemplate the consequences of failure?

The major players in this game just might find themselves having a LOT of free time to contemplate — and regret — their life choices.

Now that the Russian Collusion hoax has been put to rest, we can finally dig into the origin story without anyone painting it as ‘obstruction’.

And when the Left cries foul over Barr appointing someone to look into it, (because you know they will), they will have to wrestle with the fact that Obama’s self-described “wingman” Eric Holder once hand-picked the same guy.

Barr appointed John Durham, the U.S. attorney in Connecticut, to conduct the inquiry, the person said. The person could not discuss the matter publicly and spoke to the AP on condition of anonymity.

Durham’s appointment comes about a month after Barr told members of Congress he believed “spying did occur” on the Trump campaign in 2016. He later said he didn’t mean anything pejorative and was gathering a team to look into the origins of the special counsel’s investigation.

…The inquiry, which will focus on whether the government’s methods to collect intelligence relating to the Trump campaign were lawful and appropriate, is separate from an investigation by the Justice Department’s inspector general. The agency’s watchdog is also examining the Russia probe’s origins and Barr has said he expects the watchdog report to be done in May or June.
Source: AP

Durham is a career prosecutor who was nominated for his post as U.S. attorney in Connecticut by Trump. He has previously investigated law enforcement corruption, the destruction of CIA videotapes and the Boston FBI office’s relationship with mobsters.

…Durham was unanimously confirmed by the Senate in 2018. At the time, Connecticut’s two Democratic senators, Richard Blumenthal and Chris Murphy, called Durham a “fierce, fair prosecutor” who knows how to try tough cases.
Source: AP

The man received UNANIMOUS bipartisan support for his nomination. Hard to beat that for picking someone ‘impartial’.

As the Left kept saying about Trump for the last two years of this stupid hoax ‘if there’s been no wrongdoing, there’s nothing to worry about’.

The difference with this inquiry is it has a known scope and a yes-or-no answer, not a malicious fishing expedition to dig up files that had long since been closed, or digging up unrelated dirt that was more than a decade old.

If the “first paragraph”, as the predicate has come to be called (H/t @dbongino), checks out, and this was an effort to protect America from a foreign threat, all will be well for the players involved.

If, on the other hand, we learn that the tools of government were weaponized against a private citizen for purely partisan reasons, that’s a whole other ballgame. In that case, the story needs to end with someone paying a real price. Not some low-level patsy, either. We must insist that this story ends with someone at the top of that food chain wearing prison orange. 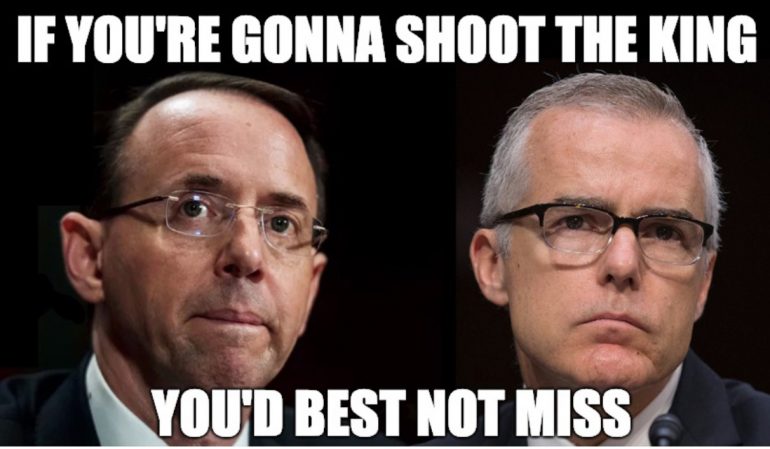 Indeed. In all their excitement about ‘insurance policies,’ they forgot to calculate the price of failure. And now the bill comes due.