Has yet another member of the ‘resistance’ fallen victim to the ‘Trump Curse’?

The ‘Trump Curse’. Did it just bite CNN in the ass?

The “Trump Curse” is a theory that anyone who says or does negative towards Donald Trump will be cursed with bad luck or negative karma.

Since his run for the Presidency documentation of the Trump Curse in action has been widespread, and has resulted in several memes showcasing it.

The origin of the Trump Curse is a mystery, but it is speculated that the mass hexes being carried out around the world are actually backfiring and hexing those who oppose Trump.
Source: Urban Dictionary

Russia. Avenatti. Clapper. Mueller. The MSN has been hellbent on knocking Trump down to size. But each attack has failed. It’s starting to look a little like this.

Now that Mueller’s investigation came up empty, CNN’s ratings are circling the toilet — even worse than before. There are more prostitutes in America than CNN viewers. More people likely to ride a bicycle to work than watch CNN, and the ratings of now-cancelled bottom-rated show ‘Wrecked’ had 100k+ more viewers than CNN. — Source: NewsBusters

A significant portion of CNN’s staff that covers health is being laid off, which comes just days after CNN denied rumors that mass layoffs were coming to the far-left network.

“Specific details were not yet known, but a source told Fox News that ‘basically the whole division’ will lose their jobs,” Fox New’s Brian Flood reported. “CNN did not respond to multiple requests for comment.”

Flood noted that TVNewser, a media reporting website founded by CNN propagandist Brian Stelter, magically got confirmation on Friday — right before the weekend when the news cycle usually dies — that CNN was, in fact, laying off a lot of its employees.
Source: DailyWire

Their parent company has been hemorrhaging money, and subsidiaries, including CNN, have been cutting staff:

CNN is the latest division of AT&T’s WarnerMedia to feel the effects of company-wide restructuring, with voluntary buyouts being taken by more than 100 seasoned workers at the cable new [sic] network.

A network spokesperson tells Deadline the exits are purely related to the buyouts and do not involve any layoffs, contrary to a press report earlier on Monday. A WarnerMedia rep said there was no truth to the initial report of layoffs.
Source: Deadline

After the ratings boom they saw during the 2015/6 Primary season when all news networks were awash in viewers, how could they possibly have squandered it?

The President called them fake news. And they all worked so very hard to prove him right.

A graphic from the first few months of his Presidency, while a little out of date, sums up their problem nicely: 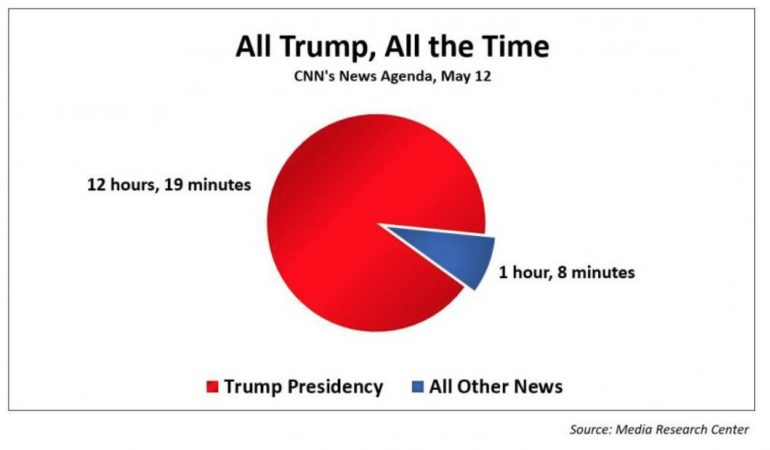 And every time their attacks backfire, (Mueller, Avenatti, Smollett, and Covington, for example) the President’s smile gets a little broader.