Mexico has done nothing to slow ‘migrants’ from streaming across THEIR southern border so they can do the same across ours.

Trump has warned Mexico that he’s sick and tired of them turning a blind eye to criminal gangs overloading our borders with people and contraband, and if THEY don’t care enough to stop it, he would hit Mexico in their wallet to MAKE them care about it.

In fact, we’re seeing record ‘asylum’ claims. The Democrats actually WANT to see the crisis worsen, have actually LOWERED the money available for detention beds. This, of course, has led to any number of problems you’d expect to see in a strained system, up to, and including inadequate care.

Inadequate care which is used as a political poker chip to show the world how ‘inhumane’ this administration is… despite the fact that the funding was explicitly capped (and lowered) by the DEMOCRAT house. 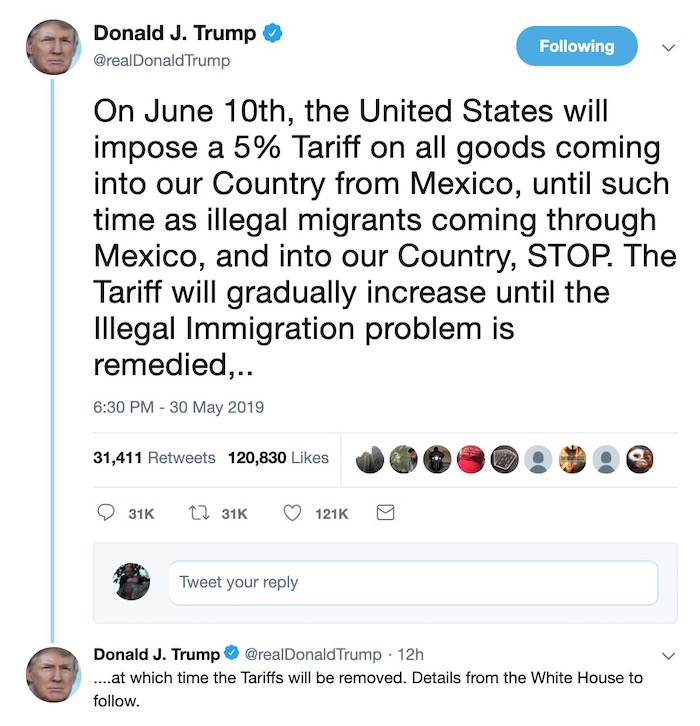 People will object to the tariffs for economic reasons. But this is not an economic decision in the traditional sense. This is a punitive action for a country that has no respect our borders or laws.

He could close the border entirely (he’s even considered it) — but that has a serious ripple effect on our own economy, too.

This is the same approach on a smaller scale.

And the funny thing about all this?