If Democrats were trying to stake out the ‘anti-Jewish’ vote, they’re going about it the right way.

Here’s a tip. When you’re talking about the Holocaust in WWII, it’s good to remember the victims are the Jewish people who were the targets of genocide. Using the Holocaust to snipe at Israel’s relationship with their Palestinian neighbors is never a good look.

Here’s what Tlaib said to land her in hot water… this time.

There’s always kind of a calming feeling, I tell folks, when I think of the Holocaust, and the tragedy of the Holocaust, and the fact that it was my ancestors – Palestinians – who lost their land and some lost their lives, their livelihood, their human dignity, their existence in many ways, have been wiped out, and some people’s passports,’ Tlaib said during the podcast, which was posted on Friday.

‘And, just all of it was in the name of trying to create a safe haven for Jews, post-the Holocaust, post-the tragedy and the horrific persecution of Jews across the world at that time.

What’s wrong with that statement? Absolutely everything!

Here’s a look at history as it actually happened, rather than the story she’s selling us.

…The problem with Tlaib’s characterization of Palestine as a “safe haven” is that the reality was that Jewish immigrants and refugees were not welcomed or provided a safe haven in the country. Instead, they faced consistent harassment and massacre.

In April 1920, Husseini, the same one who led the Arab Revolt in the 1930s, used the occasion of the religious procession of Nebi Musa to instigate riots against Jews. The British concluded that the riots were due to “Arab disappointment at non-fulfillment of the promises of independence” and “Arab belief that the Balfour Declaration implied a denial of self-determination.” The November 1917 Balfour Declaration had been issued by the British with promises to help create a national home for the Jewish people in Palestine.

In August 1929, more riots across British Mandate Palestine led to the murder of 133 Jews, including the massacre of Jews in Hebron. These were also incited by Husseini, who had given out pamphlets claiming there was a Jewish conspiracy to take over al-Aqsa Mosque. This was not a “safe haven,” but a butchering and persecution of ancient Jewish communities in places like Hebron. It was not opposition to “Zionism,” but the purposeful targeting of the most vulnerable and indigenous Jewish communities.

Far from being a safe haven, the British interned Jewish refugees in camps in Palestine. At Atlit, one of the many internment camps for Jews can still be seen. It is thought that 122,000 Jews were able to flee through the British blockade to Palestine, but many thousands ended up in camps like Atlit. They were sprayed with DDT, which harmed their health. The British even sought to deport Jewish refugees who were able to make it to other countries. For instance, they tried to send 1,800 Jewish refugees fleeing Nazi Europe in 1940 to Mauritius aboard the ship Patria and another ship named Atlantic. This was not a “safe haven” but a brutal treatment meted out to the weakest and most vulnerable people who had risked everything trying to flee Hitler’s Europe. At a time when Jews desperately needed to leave, not only were the doors of Western countries closed to them, but also those of Palestine and other areas in the Middle East.
Source: JerusalemPost 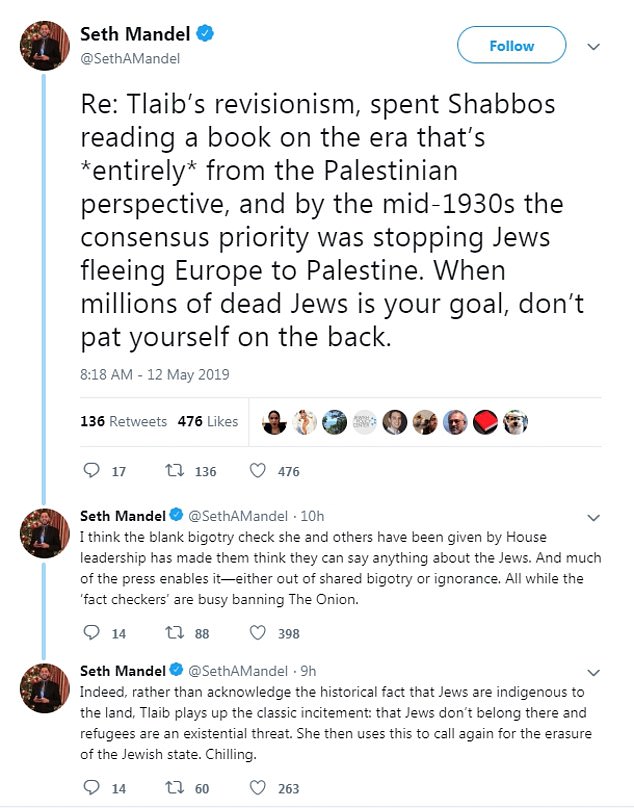 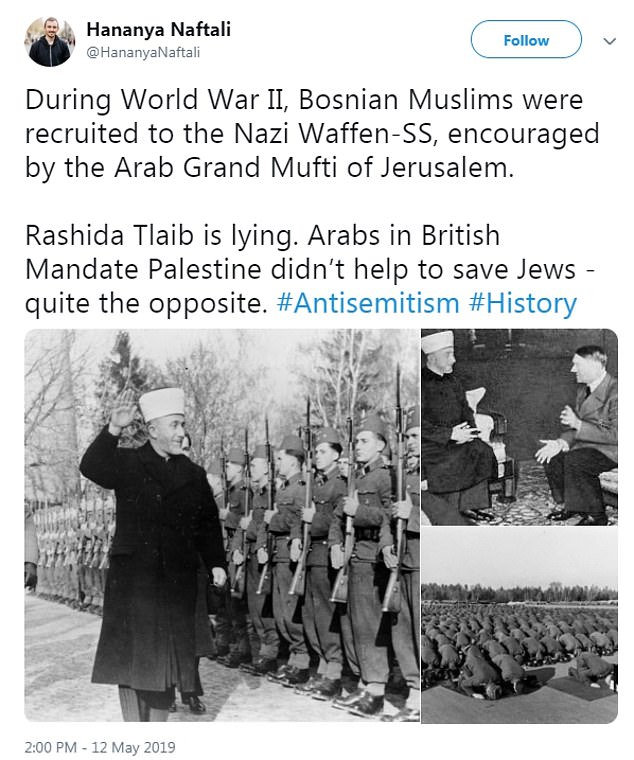 Notice the German-speaking guy with the funny mustache featuring prominently in the upper right photo in the previous tweet.

If Palestinians are so ‘Israel-friendly’… why did they elect a terrorist group (Hamas) to lead them? Surely they would know that Hamas had within its charter a pledge to destroy Israel, right?

And what do Democrats do when they get caught doing something stupid?

They play the blame game! And right on cue, here she is:

Policing my words, twisting & turning them to ignite vile attacks on me will not work. All of you who are trying to silence me will fail miserably. I will never allow you to take my words out of context to push your racist and hateful agenda. The truth will always win.

Sorry chica, we don’t need to ‘twist’ your words to make them hateful. And we don’t want to ‘silence’ you either. What we ACTUALLY want is to amplify your voice so that Democrats make a decision to stand behind your racist agenda or with it.

That will provide a lot of clarity and context for many decisions come 2020… and put the lie to claims of your team being the ‘party of tolerance’.