Not so smug now, eh?

The former IT aide to Sen. Maggie Hassan and intern to Rep. Sheila Jackson Lee is heading to prison for what is being called “the largest known data theft in Senate history.” According to the Daily Caller, Jackson Cosko, “pleaded guilty in April to crimes related to an unparalleled effort to ransack a Senate office, extorting a Democratic senator, illegally harming Republicans for their political views, and blackmailing a witness.”

Prosecutors wanted to make an example of Cosko, noting his “self-righteous entitlement” and “belief that he could violate the sanctity of the United States Senate at will and threaten individual Senators as he pleased.”

Cosko, a “Bernie Bro,” wanted to punish people who disagreed with his politics, and he used stolen data from Hassan’s office to do it. He published the personal information of  Republican Senators Lindsey Graham, Orrin Hatch, Mike Lee, Rand Paul, and Mitch McConnell. Prosecutors say that Cosko “laughed” about his actions because it ruined Sen. Hatch’s wife’s birthday.

Cosko admitted he stole the New Hampshire Democrat’s data out of revenge for being fired, then used it to doxx Republicans during the Brett Kavanaugh hearings.

“The government believes that a significant sentence would help to make clear that difference of political opinion do not entitle people to engage in politically motivated, criminal attacks threatening elected officials with whom he disagrees, and would thereby encourage respect for the law, and deter future criminal conduct,” prosecutors wrote…

…“The defendant operated under the belief that he was entitled to inflict emotional distress upon United States Senators and their families, simply because they disagreed with the defendant and had different political views,” prosecutors wrote. “The government believes that there appears to have been an increase in similar criminal harassment, particularly through social media channels, by people across the political spectrum.”

In the sentencing memo, new details emerged about the shocking actions that Cosko took to exact his revenge and that he had an accomplice.

The Daily Caller reports that another Democrat staffer for Hassan, Samantha DeForest-Davis, assisted Cosko even after he was fired in exchange for rent money. She helped him break into the Congressional office at night and steal emails. DeForest-Davis has also been fired but has not been charged.

A computer in the office had been quarantined by Capitol Police, but they didn’t realize that Cosko had installed keylogger devices into many of the computers which were sending every keystroke, including passwords and other private information, over a WiFi signal that could be accessed in the public hallway.

In a sentencing memo, prosecutors described “a months-long series of burglaries and sophisticated data theft offenses directed at the office of United States Senator Maggie Hassan; to a separate set of ‘doxxing’ offenses through which he maliciously released personal information of Senators Lindsay Graham, Orrin Hatch, Mike Lee, Rand Paul, and Mitch McConnell; and to obstruction of justice, because he attempted to silence a witness by threatening to release the private health information of a Senator’s children, because he corrupted another person and persuaded her to attempt to ‘wipe down’ the scene of his burglaries, and because he attempted to destroy evidence in his own apartment.”

Cosko was hired by Sen. Hassan as an IT administrator who was “entrusted with access to all of the computer systems and data in the Senator’s office” despite having a criminal record. He was fired in May 2018 for “performance-related reasons” which have not been disclosed.

Prosecutors say that he was angry about the termination of his employment for months and he took “advantage of his in-depth knowledge of the office’s computer security measures and practices, engaged in an extensive computer fraud and data theft scheme that he carried out by repeatedly burglarizing Senator Hassan’s Office.”

They also said, “the defendant ultimately copied entire network drives, sorted and organized sensitive data, and explored ways to use that data to his benefit.”

Despite his firing by Sen. Hassan, he was hired as an unpaid intern for Rep. Sheila Jackson Lee(D-TX). He was able to maintain an unpaid job because of his family’s wealth. This job gave him access to the House computer network which allowed him to continue his data theft.

When the circus around the confirmation of Brett Kavanaugh to the Supreme Court erupted, Cosko decided to use the information to “punish” Republican lawmakers by posting their private addresses and phone numbers online.

“The defendant obtained and took dozens of means of identification (including network login credentials) belonging to at least six employees of the Office of Senator Hassan – that is, his conduct constituted numerous instances of identity theft,” they continued. “The defendant also surreptitiously installed ‘keylogger’ devices on at least six computers in Senator Hassan’s Office,” which were “designed to be unobtrusive, legitimate looking devices that would go unnoticed by the individuals that were using the affected computers.”

Notes about his plans written by Cosko were found in his apartment and submitted as evidence. 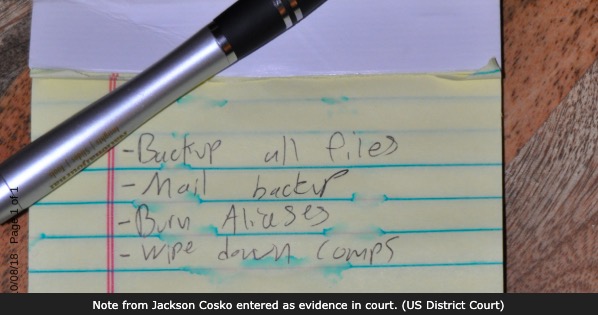 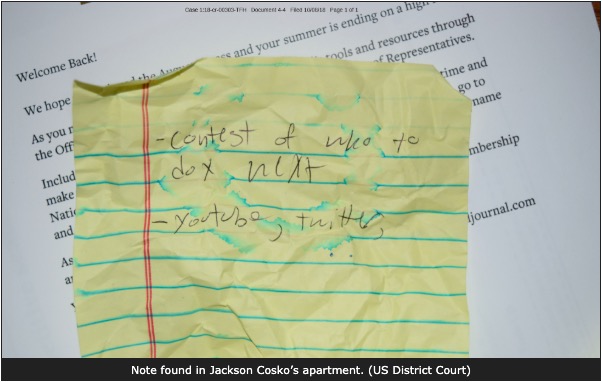 Remember, kiddies, it’s Donald Trump that is the threat to democracy, not some obscure Bernie Bro intern for Rep. Sheila Jackson Lee who was hacking Congressional computers with keystroke devices. Well, maybe that’s not a “was” because the Capitol Police haven’t been able to detect the WiFi signal, so they’re not certain that all of the devices have been removed.

After Kentucky Republican Paul — who was the victim of a physical assault and has been shot at — demanded accountability for the mystery “doxxer,” Cosko targeted Paul and Senate Majority Leader Mitch McConnell “with the intent to intimidate them,” posting their personal addresses and phone numbers, knowing that others would use the information to harass them, prosecutors said.

On Oct. 2, Cosko went back to Hassan’s office for more after asking Deforest-Davis for her key. According to prosectors, he was caught in the act by a Hassan employee and fled, then emailed the witness: “If you tell anyone I will leak it all. Emails signal conversations gmails. Senators children’s health information and socials.”

Well, now. That’s a dipsh!t move if ever I saw one.

He’s getting nearly five years for that? Dude had notes. And emails. And freaking keystroke devices on Congressional computers!

Oh, and on behalf of Orrin Hatch’s wife, “Happy Birthday” for the next 5 years or so.