What one race-hustling keyboard warrior meant as a tool to intimidate and silence the Right can show us exactly what we are REALLY dealing with on our digital public square.

We’re going do four things in this article.

1) Look at the big picture, 30,000 foot view of censorship and tyranny on the Digital Public Square
2) Look at the small picture in how those tactics were cynically and dishonestly deployed against yours truly
3) Discuss why it matters if there is freedom to dissent on social media
4) What can be done about it

Herr Zuckerberg admits that Silicon Valley tilts way left. Wired Magazine contributors have expressed concern he is trying to create his own digital country and currency to rival the greenback. And the co-founder for Facebook has called him a tyrant.

We’ve seen top Twitter brass praise an article talking about a ‘new civil war’ in which Red State America be co-opted and forced to adopt Leftist politics whether they want them or not, citing their success in doing the same in California as their model. Leftists Want A ‘New Civil War’ – This Post Is Disturbing

Project Veritas uncovered video (since purged from many of the digital platforms) where Google execs are admitting their objective of tilting the next election so that 2016 doesn’t happen again.

And they are all unabashedly following the tactics outlined by an old Clinton Flunkie at Media Matters in squeezing the right out of the digital public square — both in the news cycle censorship and in the silencing of individual voices not Left of Lenin. A plan that was released as a White Paper that you can see for yourself.

The Small Picture
Part One: The Agitator

How a race-hustler silenced my social media voice… and how Twitter rewarded them for it.

It began with me jumping on a thread by Candace Owens talking about the Kaepernick hypocrisy. I called him out with a tweet that got something like 700 likes. For a modest-sized account like mine, that’s a lot.

Some random keyboard warrior whose name I refuse to promote other than to say he had 80 followers, and he was a single-issue race baiter with an ax to grind. Even his Twitter handle gave that away. Who he is personally is unimportant, because he is probably one of a thousand or more playing this game, and who knows how many dummy accounts they are working out of to employ this tactic.

You can see my tweet and his race-baiting reply here:

Yeah, I wouldn’t know this idiot from Adam. We had no previous interactions And calling me that wasn’t going to fly with me:

He didn’t understand why being the only white guy at my family gatherings was incompatible with being ‘white supremacist’ and said so. 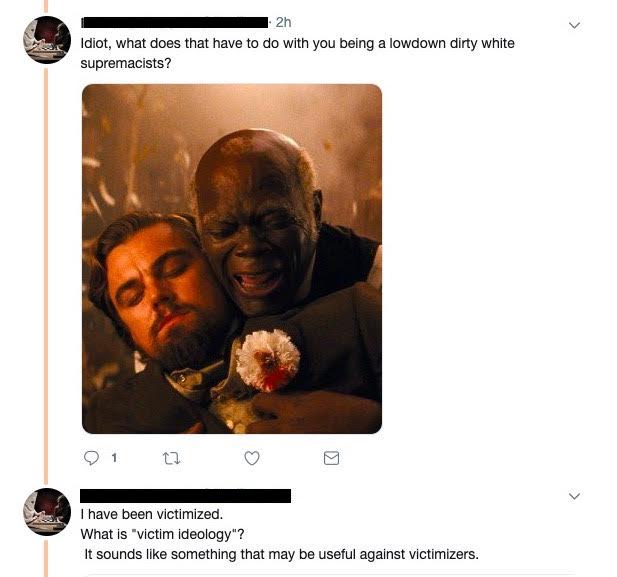 Which tells me ‘moron’ wasn’t far off the mark. I helped clarify his understanding:

Since he was measuring people by the color of their skin and not the content of their character… I went there.

I said this and put him on ‘mute’: 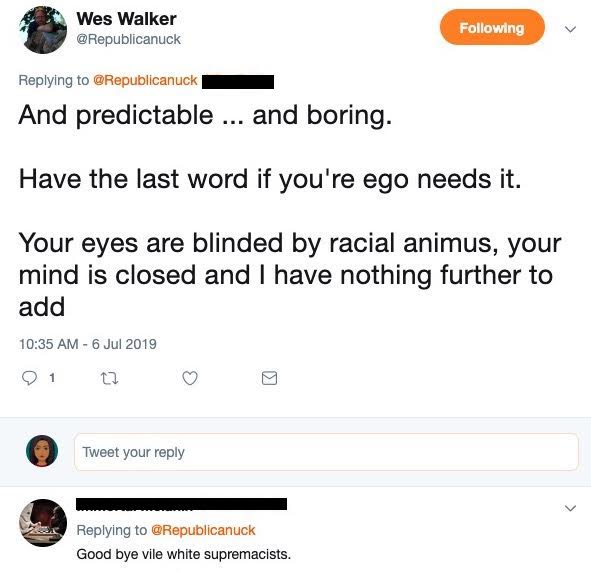 The cry-bully reported me to Twitter (not for the grammar, though) and then crowed about it.

He added (after I was reported/blocked) and could no longer see it on my own account: 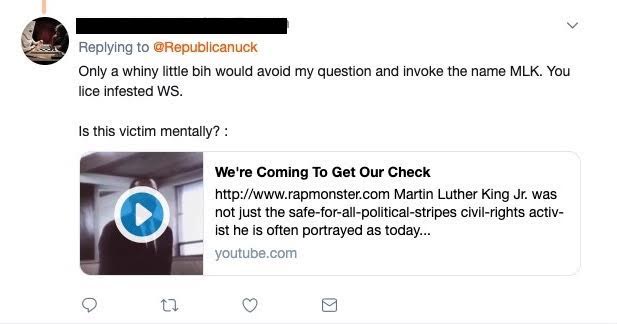 As well as something that could be taken as a personal threat: 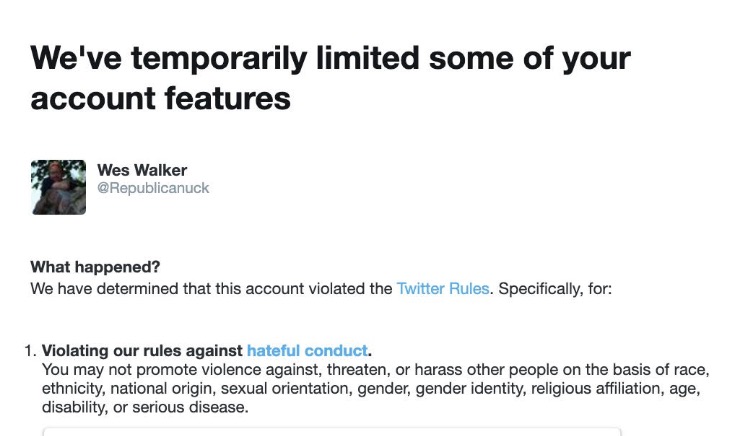 It then listed three of my tweets: the one about being the only white guy at the table for family gatherings, the one about his tiny brain and bigoted worldview, and the one thanking God that MLK wasn’t a whiny bitch, but actually made the world a better place.

I appealed it, naturally, to see whether the process was truly fair. [Spoiler alert, it isn’t.]

Appealing a suspension — I was slandered as a ‘white supremacist’ by an account whose image shows he has an agenda to silence people he(?) dislikes. He mocked my intelligence, I mocked his in return —  and the coward reported me. Note, in particular, my tweet replying to his slander saying everyone at my family gatherings but myself is a POC, and my relief that MLK was a better man that he was because he actually MADE the world a better place rather than complaining about other people or ‘settling scores’ — which is what he did in reporting me. Did I call him a ‘whiny bitch’? Sure. Then he reported me, which does seem to validate my statement. Note: HE made the first disparaging statement in our thread, I muted HIM, and told him he bores me and is welcome to have the last word if his ego requires it.
You aren’t seriously going to let his defamatory statements calling me (a stranger he couldn’t pick out of a crowd) a white supremacist stand while punishing me for calling him a liar, are you? I might expect that out of Facebook, but I had hoped you were better than that.

Had I known about his implicit threat of violence or the claim that I am ‘lice infested’ when I wrote that, you can be sure I would have mentioned that, too.

I waited three long days for them to get around to adjudicating it (which is LONGER than the time I would have been made to sit in the penalty box after complying with their fascistic demands to retract perfectly reasonable replies to an unreasonable political agitator) and they finally came back with a ruling. Care to guess what it was? 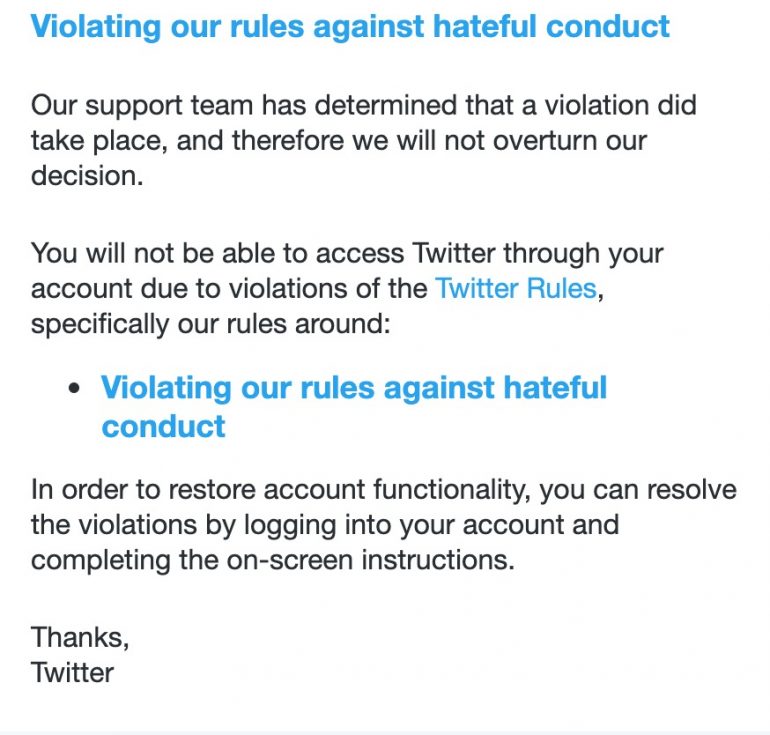 And that was my only recourse.

Why It Matters To You

As those Google execs noticed, whoever controls the information can potentially control the election outcome. If RUSSIA placing a few ads has the political class in an uproar, why shouldn’t the intentional silencing of half of the national debate?

Imagine if advertising on tv, radio or print were only available to one political party — would that influence the outcome of individual races? If the Republicans were the only ones advertising, would the DNC cry foul? Of course they would. This is no different.

The internet IS where we have our political discourse. Judges even ruled that politicians cannot block obnoxious followers on Twitter for that reason.

But voices on the right are routinely targeted and harassed on digital platforms — if they are allowed to remain at all.

If the playing field were level, that would be fine. But when one side has the power to silence the other side by sending out a battalion of anonymous single-issue keyboard warriors to pick fights and then tattle to moderators on Twitter that they are ‘offended’ we’ve lost that speech.

Why does speech matter?

Because free and fair elections ARE the pressure valve that has kept us from needing periodic revolutions. Those we elect are representatives of OUR voice.

Having our free and fair SAY is the pressure valve that means we need not use more aggressive methods of making ourselves heard, like, for instance, what we’re now seeing in Hong Kong.

It preserves civil society and civil discourse with the simple promise — that we can win the next one.

Political segregation of the digital public square is the intentional creation of have-and-have-not which will squeeze the Red States out of having their voices heard both locally and at the federal level. This creates a petri dish of distrust and animosity, effectively disenfranchising half the country.

Even though the Left may see this as a sure road to perpetual power — it can only lead to civil unrest, which is not good for anybody.

What Can We Do About It?

There are a few things.

2. Support and promote events that push back against Censorship when you are able to. For example, Dinesh D’Souza will be headlining one this September. (Website)

3. Demand that Silicon Valley (since they are exerting clear editorial decisions) play by the same rules as publishers including exposure to lawsuits, rather than the sweeping protections afforded to, say, phone companies who offer no such control.

4. Ask that Political Affiliation be added to qualities of groups that cannot be legally harassed or targeted. (I went into greater detail on that topic here)

5. Spread the word — let others know about my story or others like it. These social media apparatchiks thrive on fighting from the shadows. Expose them, and when you catch them in violation of Twitter TOS, call THEM out on it and report them. (See: Alinsky rule #4.)

The cry-bullies are deliberately trying to undercut our freedom of association by employing Alinsky-like tactics (“Pick the target, freeze it, personalize it, and polarize it.“ Cut off the support network and isolate the target from sympathy. Go after people and not institutions; people hurt faster than institutions.) to destroy individuals, and force political compliance.

If banks, credit card companies, and social media are forbidden to target groups without facing the same sort of class-action lawsuits they’d face if targeting women or minorities, it would accomplish two things:

2) it would protect targeted businesses themselves from these outrage mafia tactics that insist they comply or else become the new target. (Nice business you’ve got there. Shame if something should happen to it.)

Now that Trump broke the back of the Media monopoly, maybe it’s time to turn our attention to Silicon Valley. And if ANYONE is up for a fight like this one, you can be sure it would be DJT.