This individual has turned the legal system into a shakedown operation — but that’s not even CLOSE to the most disturbing part. The Media(D) has largely been SILENT.

A publication ban was in place until Wednesday but the media that did report on this story, which was almost exclusively covered by The Post Millennial, had referred to the individual in question by their initials, “JY”. [Editor’s note: we will also use the initials “JY” as well as Yaniv to refer to the individual in this article.]

Now that the publication ban has been lifted, JY can be identified as Jessica Yaniv, who was formerly known as Jonathan Yaniv as recently as 2018.

Yaniv is a male-bodied person who identifies as a woman and has made 16 complaints to the British Columbia Human Rights Tribunal in Canada for “discrimination” against mainly immigrant women running businesses out of their homes. The reason? These women refused to perform a “Brazilian” wax on Yaniv’s male genitalia.

But let me back up for a minute. Let’s get to know Yaniv a wee bit.

Yaniv is an activist that targets biologically female individuals

Yaniv has had two high-profile Canadian women permanently banned from Twitter for “hate speech” but continues to use the platform freely.

For many outside of that circle, she [Yaniv] is known for having been the alleged cause of both Feminist Current founder Meghan Murphy’s and free speech activist Lindsay Shepherd’spermanent bans from Twitter. For some, as described in a blog post by B.C. NDP VP and potential candidate Morgane Oger, she is known for her alleged history of potentially predatory behaviour.

This includes her apparent interest in helping 11 and 12-year-old girls insert their tampons.

It appears that Yaniv has made some outrageously lewd comments asking questions about what goes on in women’s locker rooms, and has made some absolutely disgusting comments about very young girls.

Many have claimed that Yaniv has engaged in what could be considered predatory behavior.

(WARNING: SOME MAY FIND THESE SCREENSHOTS DISTURBING) 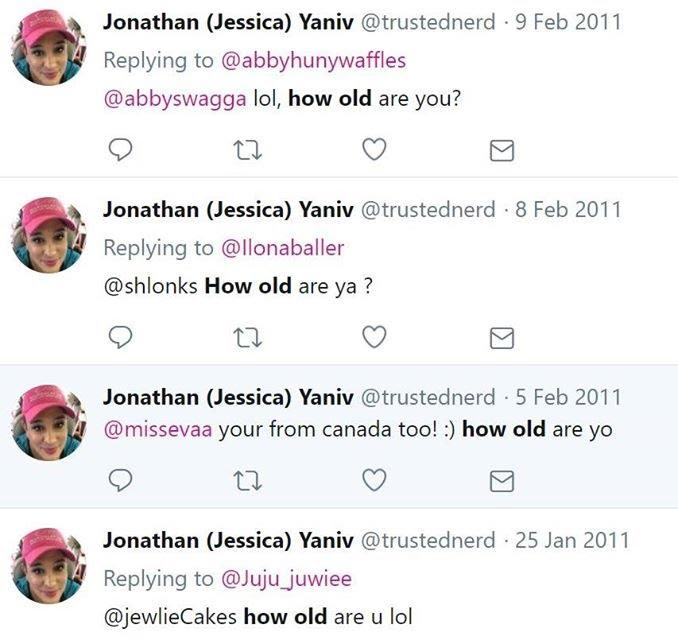 Here is JY asking about nudity in women’s change rooms. 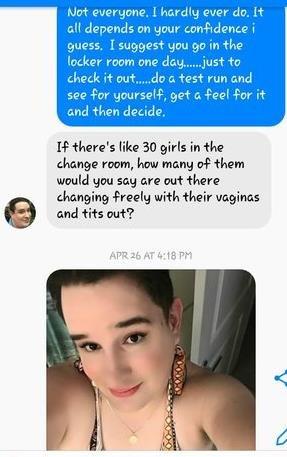 In these exchanges, you can see that Yaniv had not always identified as Jessica and was using the name, Jonathan, although at times Yaniv used both. 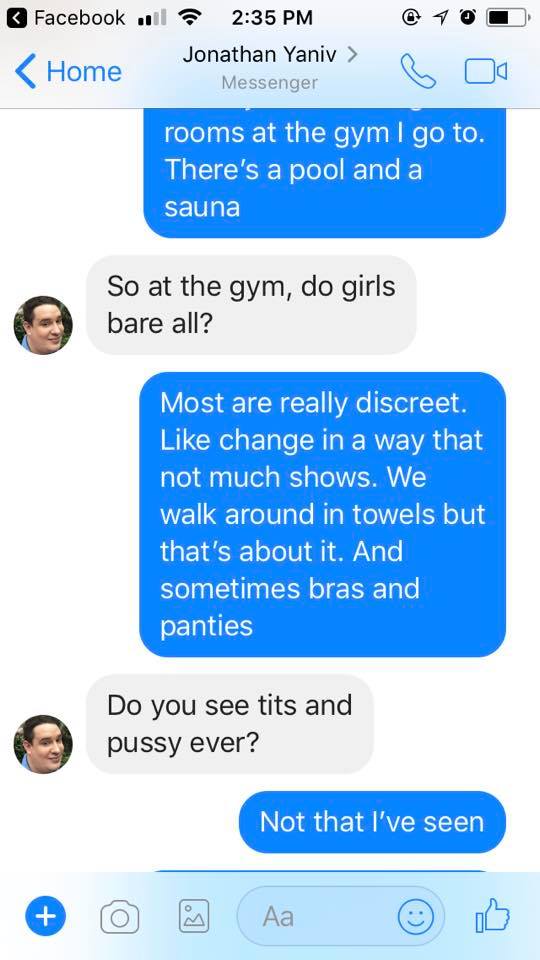 Here is Yaniv expressing concern for young girls and their ability to handle menstruation. 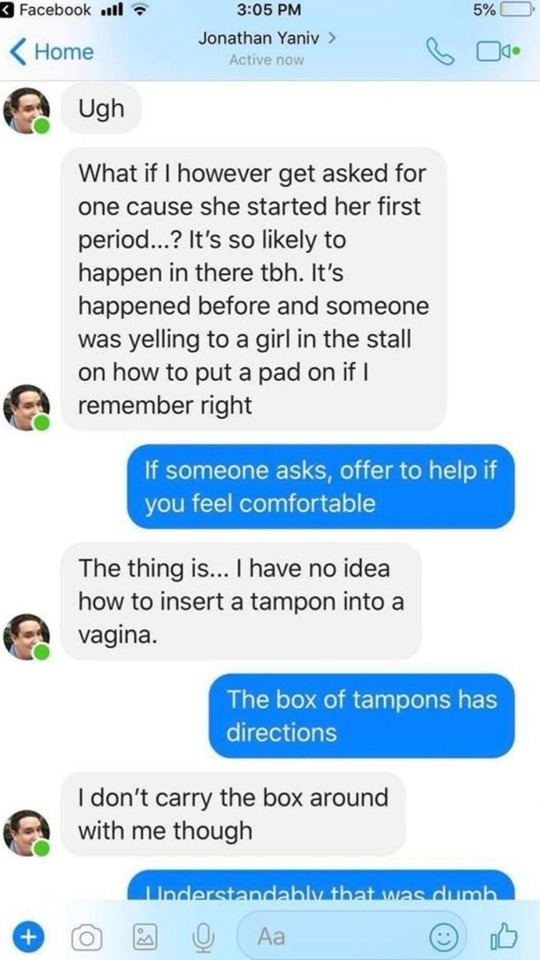 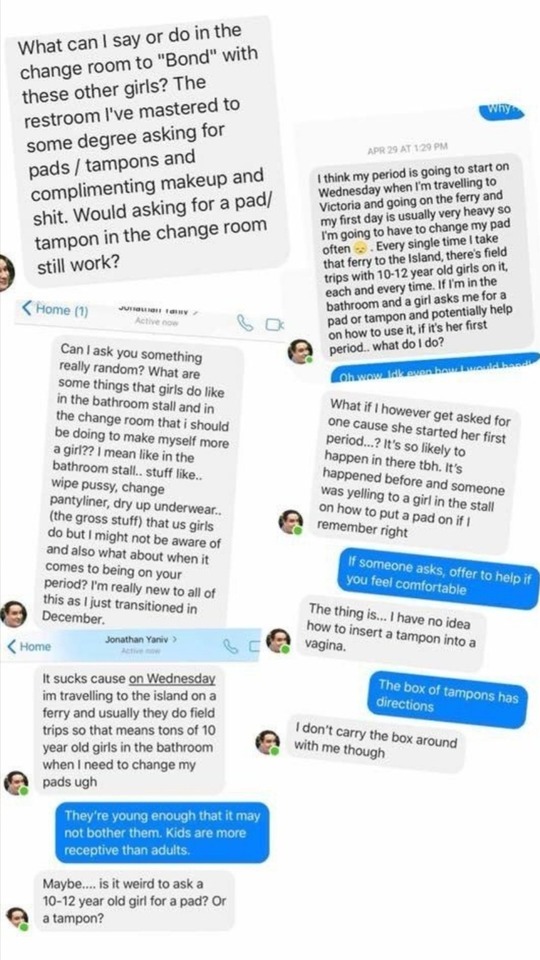 When an article was shared that girls have no right to “visual bodily privacy” from boys, Yaniv was very pleased. 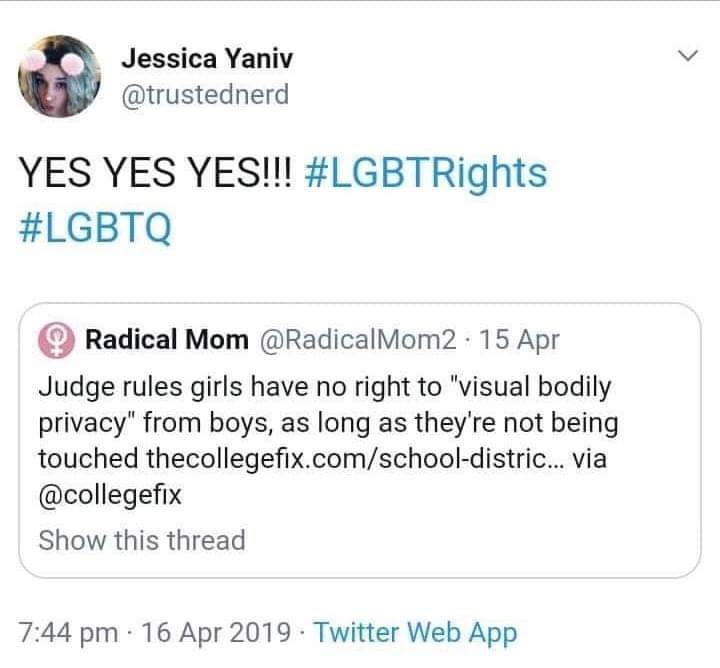 Sometimes that makes for weird advocacy.

Yaniv’s concern for young girls to have access to feminine hygiene products was so great that JY went to a local town council and was advocating for free products to be provided. This individual claims that Yaniv was also offering to go into schools and teach young girls on how to use them. 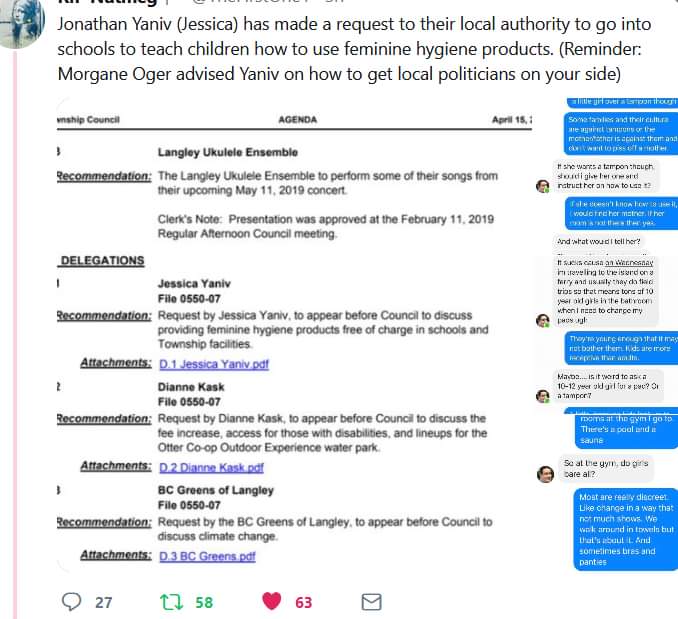 I’m not a biological male

Yaniv has said that getting male genitalia waxed by a woman is a “right” that is protected by Canada’s Human Rights Code, even if it goes against the esthetician’s cultural or religious beliefs.

Yaniv has filed 16 claims against women, 13 of which have made it to the Human Rights Tribunal. JY has dropped the other complaints. Perhaps it was because Yaniv was paid the “small fee” of up to $3,000 that was demanded of the estheticians for failing to provide the requested service. 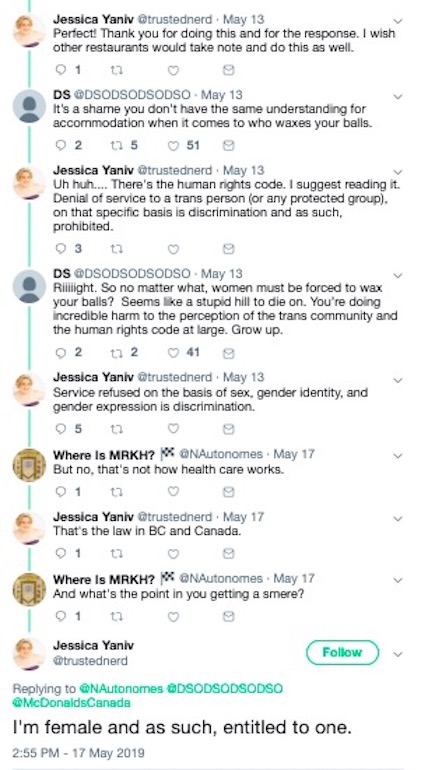 At one point, Yaniv equated the denial of service to neo-Nazism.

Under cross-examination, Cameron put to Yaniv that Brazilian waxes were services performed only around female genitalia and that what Yaniv should have sought was a “brozilian” — waxes that involve male genitalia.

That prompted Yaniv to tell the tribunal that she was intersex and that she had female body parts.

“It exists,” she said, declining to elaborate.

Cameron accused her of an outright “fabrication.”

“You’re attempting to mislead the tribunal,” he said.

Cameron called Yaniv’s credibility into question and earlier suggested that Yaniv had used a fake Facebook profile of a pregnant woman when she initially sought out the waxing service, a claim Yaniv denied. 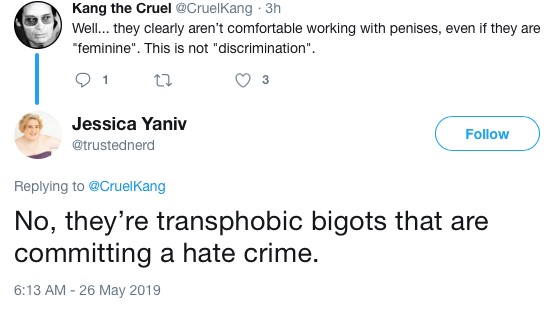 Yaniv chooses targets very carefully and perhaps for a reason…

Yaniv specifically files complaints against (mostly) immigrant women working from their home, despite the availability of waxing of male genitalia available in establishments which specialize in it.
In one instance, it is alleged that JY asked the esthetician if it was ok to have the waxing done if the client was menstruating. During one court hearing, a lawyer for one esthetician claims that Yaniv used a profile picture of a pregnant woman to disguise JY’s transgender identity. Yaniv has denied the claim.
There are indications from social media posts that Yaniv is biased against certain immigrants, especially those whose first language is not English. The Post Millennial An attempt to blame those posts on Yaniv’s mother failed.

This came to light in the publicly disclosed judge’s statement on the lifting of the publication ban.

You can read the full decision to lift the publication ban here.

Here is what Yaniv was asking individuals to do

The process for a Brazilian wax (on female genitalia) and a “Brozilian” are different because of the different parts. An expert in waxing male genitals indicated that a different type of wax is used on men because the skin is fragile in that region.

To wax a client’s penis, an individual must handle the scrotum and the shaft of the penis.

Individuals with a penis can get erections during the process, some even leak a small amount of pre-ejaculate.

While the thought of forcing anyone to handle a sexual organ as a mandatory part of their non-medical job sounds insane, especially when you consider the potential for predatory behaviour, the Human Rights Tribunal actually seems to be taking it very seriously instead of treating it as an absurd farce.

A Male to Female transgender activist who is running for office in British Columbia, Morgane Oger, has spoken out about JY’s terrible behavior and how it negatively affects views of transgender individuals.

With the help of other women who pointed the way in recent months, I tracked down and heard witnesses with first-person accounts of Jessica’s online behaviour spanning 2013 to 2018.

Their stories included reports and evidence of outrageously inappropriate acts, some towards children who are tweens and teens. Some of the material has survived as screenshots, and what I saw shows what strikes me as a pattern of predatory behaviour. I am not in law enforcement or a lawyer but as the mom of kids under 14 I was horrified by what the women told me happened and I believe them…

…Anyone in a marginalized community (or claiming to be in one) is entitled to live without discrimination because of who they are. At the same time, nobody gets to behave like Yaniv has been documented to have consistently behaved until recently – no matter what their mental health or gender identity is. Whether there is a mental health matter at play or pure mischief, nobody can expect to interact with children like I have heard testimony that Yaniv did without rightfully facing justice or accessing treatment…

…This is why we have laws addressing online predators. Our society has put in place laws and policies in place to help protect us all from the things I have heard testimony about. It is possible people can change and that this is all behind us. However, Yaniv seems to be still engaging in programs that target young women and is actively campaigning about the topic of menstrual products and girls, the focus of years of her negative behaviour. Yaniv’s recent public appearance in front of municipal policymakers motivated writing this piece.
Source: MorganeOger.ca

Yaniv is running for Miss British Columbia! (Good luck with that.)

Yaniv is also trying to organize an “All-bodies Swim” with children 12+ and says that it’s totally fine to be topless. Oh, and parents and legal guardians are prohibited for the “safety” of the children.

The swim was canceled once but JY wants it to happen. For the children, of course.

I'm going to get this party RESTARTED. July 22nd, 7 PM at the TOL as a delegation. https://t.co/IfLuZA2tiP

Also, there was this tweet where JY seems to imply that pedophiles are under the LGBTQ umbrella, or, at the very least, Yaniv didn’t denounce pedophilia.

The LGBTQ are the LGBTQ. If trans-identifying people want to have an event, why can't they? Should I lobby about getting vaisakhi shut down here as this isn't India? This is Canada. Same thing bud. Don't hate. https://t.co/PwA7Axhx4n

This is one individual.

One individual who seems to want to be around young girls without their parents and discuss intimate matters like tampon insertion to 10 and 11-year-olds.

One individual who has managed to benefit from a publication ban while the people that have been accused of violating this person’s human rights have been publicly named.

That is, until now.

Now we see you, J. Yaniv, and we know who and what you are. You’ve made it very, very clear.

And now, we know to block you on social media.