Will Ilhan’s support for terrorist financiers make all of her OTHER scandals seem Jayvee by comparison?

Yes, you DID read that correctly. Her support for terrorist finaciers. [That would shine a new light on her ‘some people did some things’ dishonest defense of who and what CAIR is, now, wouldn’t it?]

Will Ilhan get to keep her position or prominence with this revelation, or is she starting to become a liability for the party and even ‘the squad’? On the other hand, with her apparently vindictive personality, is there anyone on the left with either the guts or the clout that they even DARE to reign her in? Or are the ones who could afraid about what she might say about them? Or afraid about being Primaried?

This LATEST scandal could make the rest of us completely forget about her marital problems, possible immigration fraud, tax filings and even campaign funding.

Someone serving in Congress on the FOREIGN AFFAIRS COMMITTEE — with significant security clearances, and influence in foreign policy — has shown open sympathy and support for terrorist financiers.

If THAT isn’t a conflict of interest of the highest order, it’s hard to imagine what might be. 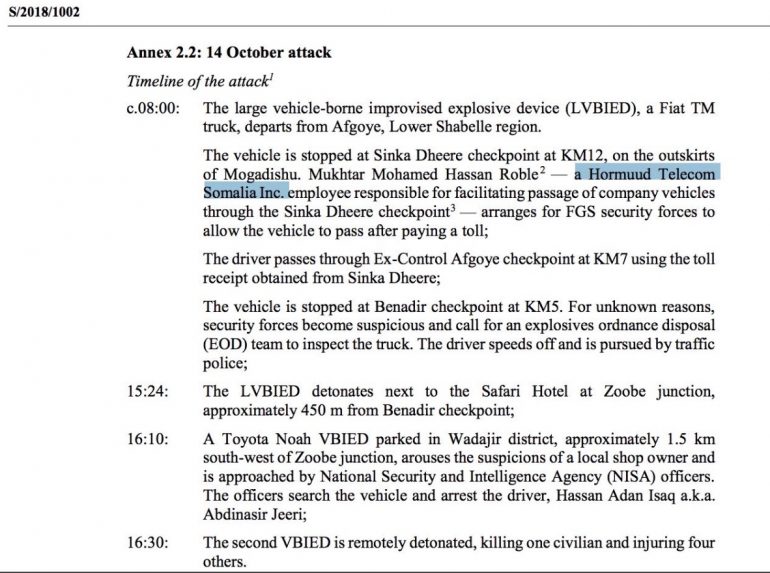 Here is the tweet that Tawhidi was reacting to. (Screen capped, so that it won’t vanish if she deletes it.) 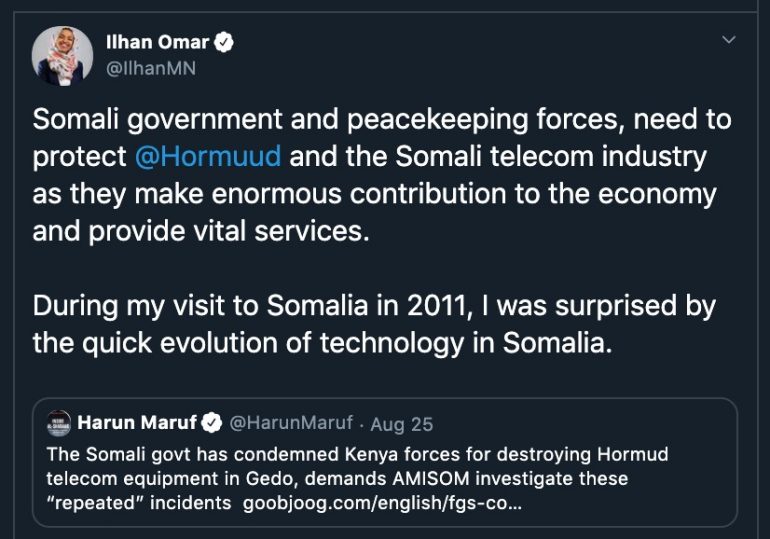 This was no one-off tweet. She followed it up with four other tweets cheering the same people. 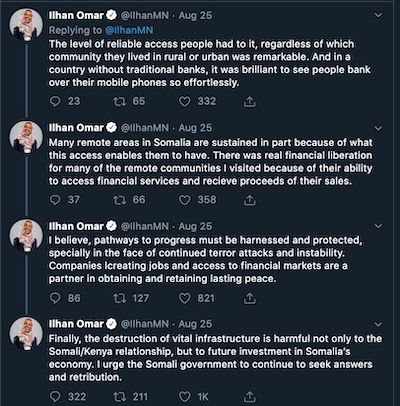 There’s a lot more to it than that, as explained in a Times of Israel piece entitled “NEW: Ilhan Omar Calls for the Protection of a Notorious TERRORIST Organization”

What follows will be a summary of some points made in that piece. For the full version, consult the original.

Mrs. Omar has publicly called for the protection of Hormuud. Yet Hormuud Telecom has been mentioned as a sponsor of terrorism, not once, not twice, but many, many times.

It gives some background on the organization’s founder

Jimale and his company were identified in an official UN report by the Secretary-General from July 2009 as being involved in direct support of a Jihadi group in Somalia, al-Shabaab. Al-Shabaab was a group specifically targeted for sanctions by the UN.

It even specifically identifies the significance of the very anonymized banking that Ilhan Omar praised in her tweets as applies to terror networks.

“According to the July 18, 2011 report of the Somalia/Eritrea Sanctions Committee’s Monitoring Group (S/2011/433), Jim’ale is identified as a prominent businessman and figure in the al-Shabaabcharcoal-sugar trading cycle and benefitting from privileged relationships with al-Shabaab.”

“Jim’ale is identified as one of al-Shabaab’s chief financiers and is ideologically aligned with al-Shabaab.”

As of fall 2007, Jim’ale established a front company in Djibouti for extremist activities called the Investors Group. The short term goal of the group was, through the funding of extremist activities and weapons purchases, to destabilize Somaliland. The group assisted in smuggling small arms from Eritrea through Djibouti into the 5th region of Ethiopia where extremists received the shipment. As of mid-2008, Jim’ale continued to operate the Investors Group.

As of late September 2010, Jim’ale established ZAAD, a mobile-to-mobile money transfer business and struck a deal with al-Shabaab to make money transfers more anonymous by eliminating the need to show identification. As of late 2009, Jim’ale had a known hawala fund where he collected zakat, which was provided to al-Shabaab.

Evidence connecting that company to terrorist bombings was included in Tawidi’s tweet, above.

Ok, fine, those are things that are going on half a world away. Somali companies, terrorist insurgencies, UN rulings. How does that REALLY relate to OUR country and OUR policy?

Fair question. There’s an answer to that, too, from the same article:

In brief: Al-Shabab is a US Listed Terrorist Organization, and Congresswoman Ilhan Omar is calling for the protection of their financier and main backer, Hormuud Telecom.

Furthermore, David Goldman, the Director of Counter Terrorism, National Security, and Intelligence Analysis at Strategic Intelligence has recently written about Hormuud in a report which can be read here.

So to recap, Ilhan Omar, who still has political ties there, was tweeting about Somalia, a country that is listed as being among the most corrupt in the entire world.

Somalia ranks among the world’s most corrupt countries. Insecurity is also a major issue; the ongoing instability greatly restricts business. Corrupt government officials tolerate illegal activities in return for bribes. Dysfunctional institutions facilitate an environment of lawlessness, and the absence of any form of regulatory framework hinders prospects of economic competitiveness. Business is based on patronage networks, and tight monopolies dominate the market.
Source: GANIntegrity

We have reported that shortly after she visited and publicly endorsed the new Somali President, her brother-in-law got a key administrative position.

We have reported her past sympathies toward known terror organizations — including Hamas affiliated CAIR — and the active lobbying she did on behalf of some Jihadis in her riding.

She has crapped on America and our institutions on a regular basis. She has spewed openly antisemitic tropes. She has nearly perfected the ‘wounded bird’ reaction to any and all criticism as somehow being the work of racial or religious bigots.

But now we have an actual Imam who embraces western values and calling for Reform in Islam at great personal cost. He is actively opposing the forces of Jihad and he is calling out Ilahn Omar, not for her color (he’s ‘brown’ too), not for her religious affiliation (after her marital history, she should be smart enough not even to TRY to match herself up against an actual IMAM on that score).

They are serious allegations and need to be treated as such.

And if it turns out her own PARTY has greater loyalties to political power than they do to serving the national interest, maybe the party itself needs to be seen and treated as a security risk.