They didn’t like the ad that denounced AOC and her socialism. So they went STRAIGHT to their usual routine. Here’s why it won’t work this time.

During the Democrats’ debates between the helpless, hapless and hopeless, there was a political ad slamming the socialism they are tripping over themselves to endorse.

It’s in the same spirit as the banner that Trump was trolling them with above the place where they were meeting. 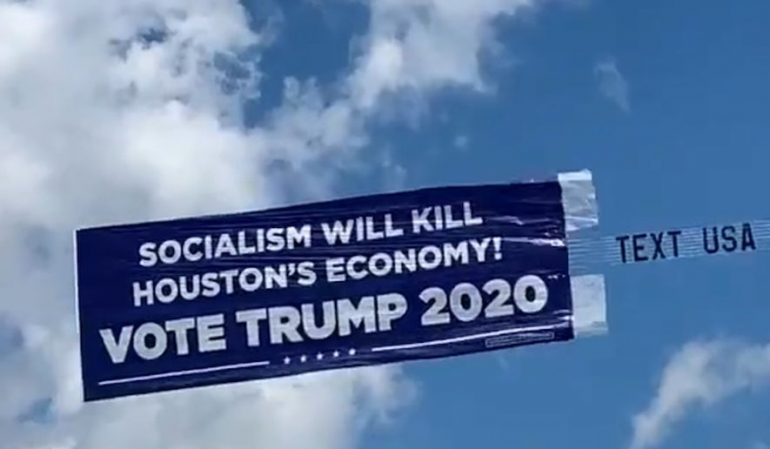 And here’s the video they are claiming is ‘right out of the white nationalist playbook’.

See if you can spot the problem with their logic. They even were helpful enough to tweet the video with the ad itself.

This is the ad @ABC allowed to run during tonight's #DemDebate: right-wing propaganda depicting @AOC set on fire, burning into images of skeletons.

This is right out of the white nationalist playbook. No news network should be profiting off such hatred.pic.twitter.com/11g7k6hf3c

Did you catch it? Elizabeth Heng, featured in this video, is LITERALLY telling us she is the daughter of Cambodian Refugees who fled a massacre known to history as ‘The Killing Fields’ that killed nearly one in four Cambodians (a figure estimated at 1.7 to 2.5 million of a total population of 8 million).

For those who judge by superficial shades, she even makes it easy for them to understand by saying ‘My skin is not white.’ But they call this person they would otherwise have labeled a ‘WOC’ a white supremacist because they oppose her politics.

The massacre portrayed in the video is not taken from WWII footage, but is the one her own father narrowly avoided being killed in at the hands of a Marxist takeover of their country.

Here is that story being told in greater detail when she was running for office.

Since they like to point fingers about ‘playbooks’ and talk about who is profiting from what money, let’s have a closer look at Bend The ARC.

Who are they? They are an activist group (‘Progressive’, of course) set up by none other than the son of George Soros. Yes, THAT George Soros.

And if they’re going to talk about ‘profiting’ illicitly off of an ad, we remind them that George Soros (the source of the family wealth) has literally tanked entire economies to fatten his own wallet. And he considers the ruination of businesses and families (the ‘little people’) just a part of doing business. He takes that money and ‘invests’ it in ‘philanthropy’ that helps refashion the world in his image.

You hear his amoral pragmatism when he’s asked about that answer. ‘Whether I do it, or somebody else does it, there is really no difference in the outcome. I don’t feel guilty, because I am engaged in an amoral activity which is not meant to have anything to do with guilt.’

The words of a sociopath, directly from his own mouth.

For all that talk about Russians and Oligarchs, the Democrats should look more closely at their OWN benefactors.

And before they run to the ‘criticism of Soros is antisemitism’ defense, let us remind you that Soros is the same guy who, when asked about his days as Collabor with the Nazi SS did not express regret after the fact, even of the times he stripped Jewish victims of their personal possessions.

And Israel’s own Ambassador said this about Soros:

“In no way was the statement (by the ambassador) meant to delegitimize criticism of George Soros, who continuously undermines Israel’s democratically elected governments,” said foreign ministry spokesman Emmanuel Nahshon, adding that Soros funded organizations “that defame the Jewish state and seek to deny it the right to defend itself”.
Source: Reuters

Surely we’re not accusing Israel as a whole of being… Antisemitic, are we?

That seems like it would be a pretty difficult case to make.

Oh, and the next time Dems bleat about ‘dark money’ buying corrupt politicians ask them how many billions Soros has shoveled into the Dems’ electioneering goals… and WHY?