Just so I’m clear: you think my friends are domestic abusers/criminals? Seriously that’s your argument? That they can’t pass a background check?

Wrong. People lend guns to friends, esp if they don’t own a gun, for self-defense and hunting purposes.

This is America outside NYC. https://t.co/wkWPhfi0JB

Herein lies an important point abt domestic abuse: most of it is hidden. You could know an abuser & have no clue.

I’ve had friends come out to me as victims. It’s not obvious. Unsafe relationships are COMMON.

Then she went off with several tweets saying “you just never know” who is a domestic abuser or a rapist.

This idea of “I know the guy, there’s no way he beats his wife” as the way we keep guns out of the hands of abusers is ridiculous.

Any person who has been abused, assaulted, etc knows that abusers often present as “upstanding.”

Domestic abusers can be master manipulators. Plus, domestic abuse is a HUGE indicator for gun violence.

That’s why “vouching for friend” isn’t a substitute for a background check.

Domestic abusers can be master manipulators. Plus, domestic abuse is a HUGE indicator for gun violence.

That’s why “vouching for friend” isn’t a substitute for a background check.

She’s not completely wrong there. You can’t tell what lies in someone else’s heart.

I’m just happy I was able to tell the far-left bubble that normal law-abiding Americans in the middle of the country sometimes lend their guns to friends.

Maybe tomorrow I’ll tell them that we also (wait for it) read the Bible.

This woman is such a peach, isn’t she?

Twitter is a strange and bizarre place where strange and bizarre ideas flourish, especially on the feed of leftist darling Rep. Alexandria Ocasio-Cortez(R-NY). Especially now that the “brains” of her operation, (if you can call it that,) Justice Democrat co-founder, Saikat Chakrabarti, left his position as Chief of Staff for AOC amid an FEC investigation into campaign finance “irregularities.”

Oddly enough, despite the crazy AOC tweets, no one on the left is suggesting that she stop or telling staffers to confiscate her phone. That’s because they don’t find her tweets all that weird.

But they really are weird.

You won’t hear me telling her to delete her tweet. When she tweets dumb stuff, it sure does make my job easier.

Late yesterday evening, Rep. Dan Crenshaw(R-TX) retweeted a video of news coverage about a young woman who used her handgun to protect herself from 5 men trying to rob her. As an aside, he mentioned that universal background checks would prevent him from lending his friends his handgun when they travel alone.

Situations like this story are why we protect the 2nd Amendment.

Side note: With universal background checks, I wouldn’t be able to let my friends borrow my handgun when they travel alone like this. We would make felons out of people just for defending themselves. https://t.co/x60mdd1WW1

She lectured Rep. Crenshaw for possibly (and unwittingly) lending a gun to domestic abusers and people with violent criminal records.

You are a member of Congress. Why are you “lending” guns to people unsupervised who can’t pass a basic background check?

The people you’re giving a gun to have likely abused their spouse or have a violent criminal record, & you may not know it.

Why on earth would you do that? https://t.co/TQFjcLQebO

Here is a screenshot of the tweet just in case it gets deleted: 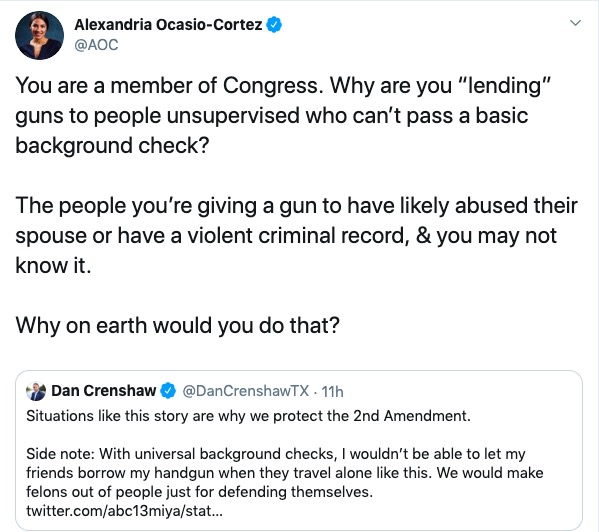 She’s suggesting here that Rep. Crenshaw would be so flippant with handing over a handgun to his friends as a loaner that he wouldn’t care who it was that he gave the gun to.

I’m pretty sure that a responsible gun owner like Rep. Crenshaw would be quite selective on who it is that he allows to borrow his gun.

Not only is she saying that he’s irresponsible, but she’s also suggesting that his buddies are possibly violent offenders or abusers.

Where does she get this from?

She yanks it out of thin air.

There’s more evidence that her friend, Rep. Ilhan Omar(D-MN) is the following:

So, do we condemn AOC for the actions of Ilhan Omar? Nope. That would be wrong.

And yet, she still defends Omar because they’re friends.

Besides, since she and fellow “Squad” member, Ayanna Pressley have been helping to raise funds to bail out violent Antifa “protesters” — which the President is considering designating a domestic terrorist organization — perhaps she should sit this one out.

Really, does she know if these people, some of whom assaulted police officers and carried dangerous weapons, have prior criminal records? Does she even care?

This is why she has been dubbed “Occasional Cortex” by many on the right.