The exploration of a 2200-year-old fort may have solved a riddle that had long gone unanswered.

Where, exactly, is the place Jesus was headed on the day he rose again?

Archeologists had long wondered about the location of a place that is mentioned right in the heart of the gospel accounts of Christ’s resurrection. Emmaus. And now, they think they’ve found it.

For context, here’s the passage where it is mentioned, from Luke 24:

That very day two of them were going to a village named Emmaus, about seven miles from Jerusalem, and they were talking with each other about all these things that had happened. While they were talking and discussing together, Jesus himself drew near and went with them. But their eyes were kept from recognizing him. And he said to them, “What is this conversation that you are holding with each other as you walk?” And they stood still, looking sad. Then one of them, named Cleopas, answered him, “Are you the only visitor to Jerusalem who does not know the things that have happened there in these days?” And he said to them, “What things?” And they said to him, “Concerning Jesus of Nazareth, a man who was a prophet mighty in deed and word before God and all the people, and how our chief priests and rulers delivered him up to be condemned to death, and crucified him. But we had hoped that he was the one to redeem Israel. Yes, and besides all this, it is now the third day since these things happened. Moreover, some women of our company amazed us. They were at the tomb early in the morning, and when they did not find his body, they came back saying that they had even seen a vision of angels, who said that he was alive. Some of those who were with us went to the tomb and found it just as the women had said, but him they did not see.” And he said to them, “O foolish ones, and slow of heart to believe all that the prophets have spoken! Was it not necessary that the Christ should suffer these things and enter into his glory?” And beginning with Moses and all the Prophets, he interpreted to them in all the Scriptures the things concerning himself.

So they drew near to the village to which they were going. He acted as if he were going farther, but they urged him strongly, saying, “Stay with us, for it is toward evening and the day is now far spent.” So he went in to stay with them. When he was at table with them, he took the bread and blessed and broke it and gave it to them. And their eyes were opened, and they recognized him. And he vanished from their sight. They said to each other, “Did not our hearts burn within us while he talked to us on the road, while he opened to us the Scriptures?” And they rose that same hour and returned to Jerusalem. And they found the eleven and those who were with them gathered together, saying, “The Lord has risen indeed, and has appeared to Simon!” Then they told what had happened on the road, and how he was known to them in the breaking of the bread.

The fortified town just West of Jerusalem may have yet another claim to fame: 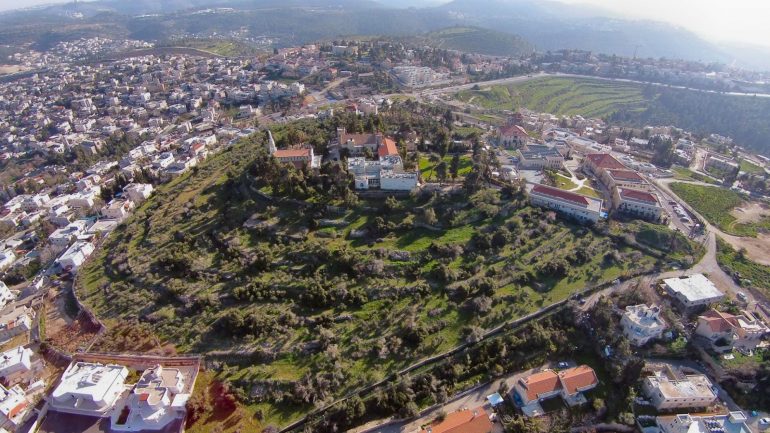 Archaeologists in Israel may have discovered the Biblical town of Emmaus, which is linked to Jesus’ resurrection and the Ark of the Covenant.

Haaretz reports that archaeologists have uncovered the remains of a 2,200-year-old fortification at Kiriath-Jearim, a hill on the outskirts of Abu Ghosh, a village near Jerusalem.

The fortification dates back to the Hellenistic period when ancient Greek influence in the region was strong. Tel Aviv University Professor Israel Finkelstein told Haaretz that the walls were repaired during the later period of Roman rule in the first century A.D.
Source: Fox

Why would that location Seven miles out of Jerusalem even be relevant to the Resurrection account? One of the best (and most entertaining) explanations you’ll ever come across is in this short clip:

Seven miles from Jerusalem, in a place they would scarcely have thought to look they may have finally found the answer to a 2000 year old puzzle.

Here’s another site they found in a dig… right where the evidence said they should look.