Uh-oh. The left won’t want this to get out — it destroys their argument that mass illegal immigration is a good thing.

The argument that we always hear is that the vast majority of people crossing the southern border illegally are just sweet, wonderful people who “just want a better life.” While that is certainly true in some cases — and we could argue whether or not they should be able to apply for asylum for that reason another time — the fact is, they’re not the only ones crossing the border.

There are some people that are violent and willing to do whatever it takes to make it into the United States, including assaulting and even shooting at Customs and Border Protection agents.

CBP agents are trained to deal with aggressive situations, but should they really have to? It shouldn’t be acceptable that our Border Control officers are facing these kinds of threats.

“Since the beginning of the year, more and more of our agents are getting assaulted,” said Chris Cabrera, a Border Patrol agent and the Vice President for the Local 3307 National Border Patrol Council.

Over 600 assaults on Border Patrol agents have been recorded since the start of the fiscal year, according to Border Patrol Chief Carla Provost.

Can you imagine the stones it takes to assault the law enforcement officers trying to stop you from crossing the border illegally? 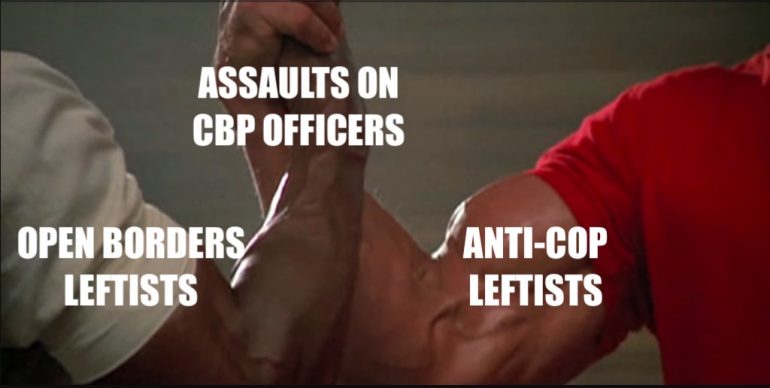 “We do see a lot of it, our guys get assaulted quite a bit, from punching them, a full on fist fight, pushing on them, spitting on them, it happens quite a bit,” said Cabrera. ‘It’s something we train for, we continue to train for, we’re always training for something like that, so we can go home to our families at the end of the night.”

Cabrera remembers a time a fellow agent was assaulted by two men trying to get away from being detained.

“They actually fought for eight minutes and luckily the big guy ran away, but it took eight minutes for someone to get out there and help. Luckily, the agent was in tip-top shape and was able to hold him down until help arrived,” said Cabrera.

Not quite a month ago, CBP agents patrolling the Rio Grande on the Marine Riverine Unit were shot at over 50 times, and their boat was hit multiple times. No one was ever charged.

Gunfire didn’t just happen that one time on the Rio Grande, though. Video of a man shooting several times at a border wall was released by agents in Yuma, Arizona. The man was never caught.

#BORDERNEWS Over 600 assaults on Border Patrol agents have been recorded since the start of the year, according to @USBPChief, Carla Provost.

"More and more of our agents are getting assaulted," said Chris Cabrera, a Border Patrol agent and the Vice President for @rgv3307 pic.twitter.com/PNdqqBIZfR

It isn’t a moral argument to allow illegal border crossing. It puts people at risk, and often times the first people put at risk are CBP agents.

Let’s bring that into the border control debate, shall we?