Maybe that ‘war on billionaires’ was a little shortsighted? But Pocahontas STILL thinks it’s a winning play.

How does a leftist win today’s Democrat base? Nah.

She’s got big plans for all that money that Wall Street has amassed. In her mind, she’s already spent it several times over. But that could raise some serious issues for her own party.

For all the talk about Wall Street and rich dudes in suits being inherently Republican in nature, the facts don’t bear that out. A lot more of these big-government types know

You’re in a box because you’re a Democrat and you’re thinking, ‘I want to help the party, but she’s going to hurt me, so I’m going to help President Trump,’” said a senior private equity executive, who spoke on condition of anonymity in fear of retribution by party leaders. The executive said this Wednesday, a day after Speaker Nancy Pelosi announced that the House would begin a formal impeachment inquiry into Trump.

A spokeswoman for Warren declined to comment. She tweeted her response to CNBC’s report later Thursday.

During the campaign, Warren has put out multiple plans intended to curb the influence of Wall Street, including a wealth tax. In July, she released a proposal that would make private equity firms responsible for debts and pension obligations of companies they buy. Trump, meanwhile, has given wealthy business leaders a helping hand with a major corporate tax cut and by eliminating regulations.
Source: CNBC

She’s actually welcoming this blowback as though it’s a good thing!

I'm fighting for an economy and a government that works for all of us, not just the wealthy and well-connected. I'm not afraid of anonymous quotes, and wealthy donors don't get to buy this process. I won't back down from fighting for the big, structural change we need. https://t.co/nx7GczQhHl

1) She’s forgotten which side her party’s bread is buttered on… it isn’t the Republicans who have benefited the most from billionaire donors.

Example from 2016, look how many of the top big-dollar donations went to Democrats: 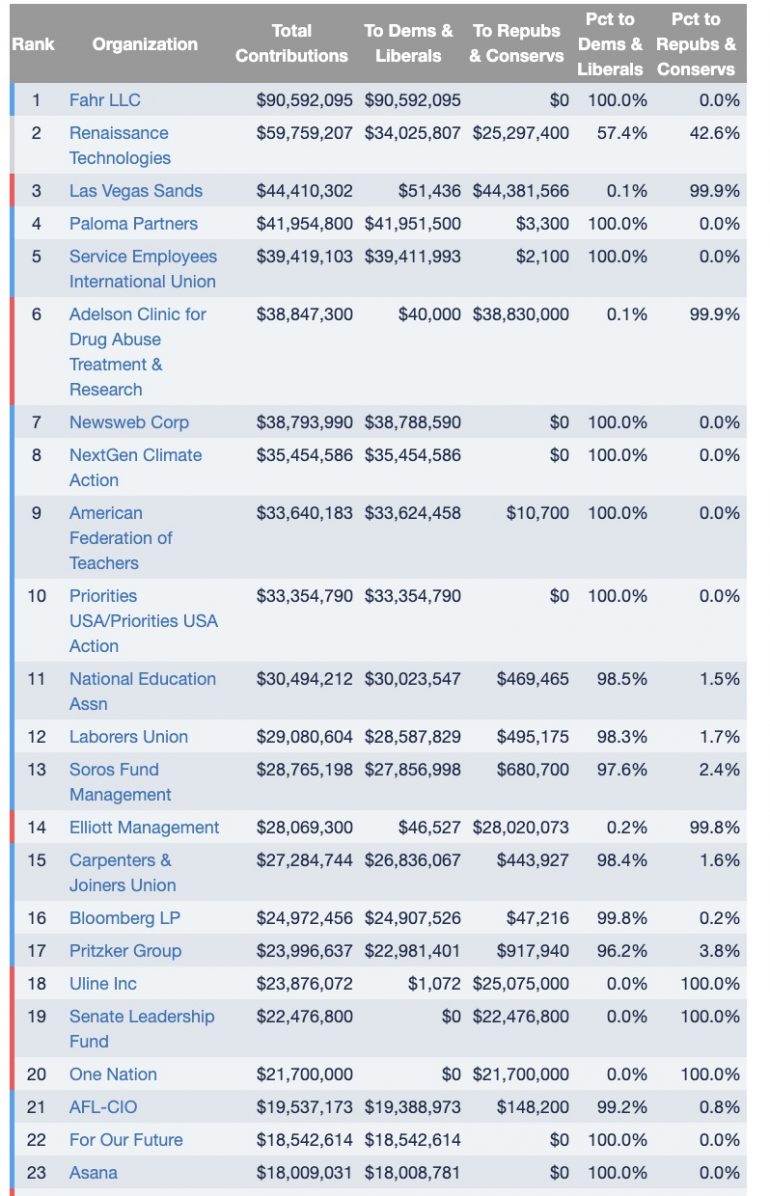 2) She’s forgotten about the portability of money.

Unlike poor work-a-day shmucks stuck in in the daily rat race, Billionaires are not rooted to a particular city or even country.

A-list actors, for example, flit from one country to another all the time — Remember the Clooneys pulling up stakes and moving from the UK to America?

That same principle lets them get out of dodge if the government comes gunning for them. Not only do the hard-core leftists lose the income stream they were desperate to get their grubby little hands on but they lose business and investment in the process.

French actor Gérard Depardieu has declared that he will “sell everything” in his home country, including his chateau and restaurants.

Already living as a tax exile in Belgium, with another address in Russia where he has been granted citizenship, the provocative star has said that this time he wants to sever all ties with France, including his string of properties.

“I think I want to sell everything in France!” he told TV Magazine. “I don’t want to be a part of this country anymore, even though I love the French.”

In 2012, Depardieu sparked a furious debate in France after becoming a tax resident of Belgium in order to avoid a 75 per cent levy on millionaire earners – a move dubbed “pathetic” by Jean-Marc Ayrault, then French prime minister.
Source: Telegraph

‘Global Citizen’ Clooneys Are Hurrying Back To USA, The Reason Is Hilarious

QUESTION: Is Obama the Most ‘Pro-Slavery’ President In A Century And A Half?