With Marianne Williamson out, Tulsi Gabbard is easily the most entertaining of their remaining cast of characters.

She’s a fatally-flawed candidate and her own flavor of loopy, but you can say this about her — she’s feisty. She is NOT afraid to get in there and throw some elbows.

Kamala was thinking she was a top-tier candidate and must have thought she was pretty tough for having pantsed Biden. But the very next time out —  in one debate exchange — Tulsi singlehandedly slid an icepick between the ribs of any 2020 chances Kamala may have really had.

When Gabbard noticed Silicon Valley screwing her over that same night, she lawyered up and picked a fight with Google. We can respect that.

[We reported that story here, if you missed it: Hillary Thinks Everyone She Doesn’t Like Is A Russian Asset]

… Tulsi didn’t waste any time at all before she hit back.

She did more than hit back. She issued a direct challenge. 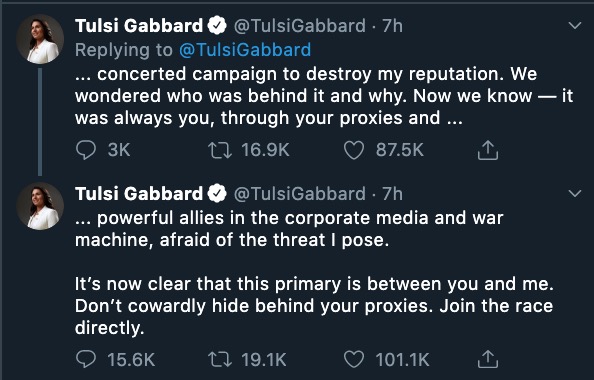 Assad day for your candidacy. https://t.co/JsQHnY6Ygo

Like we said, she’s a flawed candidate. That’s only one of the red flags. Here she meeting with Assad in a photo. 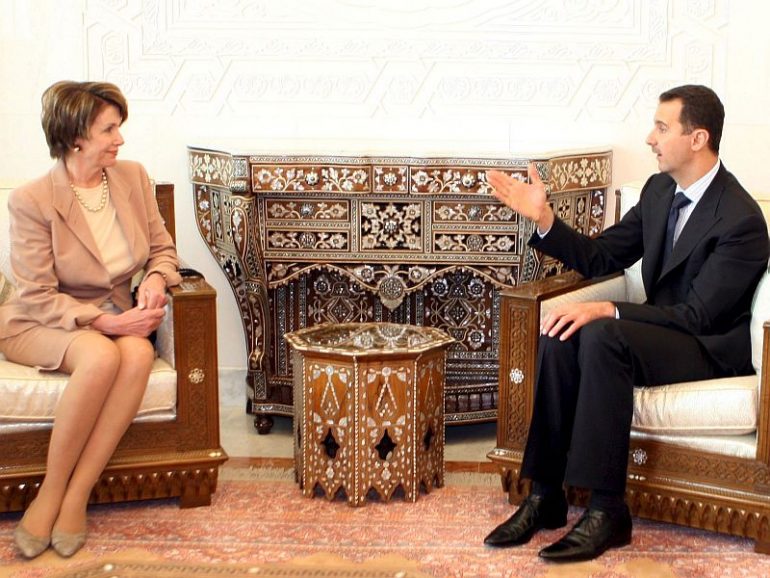 Wait a minute — that’s Nancy Pelosi! And there’s another one with Kerry, too. Was Hillary’s guy deliberately reminding us that the whole Democrat party has questions they need to answer about what kind of world leaders they like to hang with?

But let’s go back to that ‘Russian Asset’ angle. It generated some interest.

It centered on Hillary’s claim that Tulsi is the “Russian asset.”

In fairness to Hillary's Kremlin-asset, quasi-treason attack on Tulsi, I do recall reading in the nice-and-liberal @NewYorker that Tulsi once received a *half-a-million-dollars* fee from a Russian bank for a speech! Oh wait – I remembered one detail wrong: https://t.co/Z2VrHsfLkH pic.twitter.com/kazzrDFdKc

Husband Bill Clinton takes $500,000 from Russians for a speech in Moscow?

Political opponents Jill Stein and Mike Flynn just sit next to Putin at a dinner and Carter Page gives a free speech in Moscow?

We really don’t think there’s any way this exchange is going to end well for Hillary.

Besides, doesn’t Hillary already have ENOUGH on her plate, what with that IG report on her emails and criminality that just dropped?

Hillary Thinks Everyone She Doesn’t Like Is A Russian Asset

Ukraine Cranks Up Investigation Over A Helping Hillary Scheme In 2016