Thanks for announcing the “formal” impeachment inquiry, Nancy! It sure has made a difference…

A rather YUGE difference — $27.3 million worth of difference for the Republican National Committee in September alone. This announcement comes hot on the heels of the report that the RNC had raised a massive $127 million in the third quarter.

The Republican National Committee raised a record-setting $27.3 million in September and had $59.2 million cash on hand last month amid the impeachment push against President Trump — which has fueled GOP campaign contributions heading into the 2020 election.

The RNC’s September fundraising haul is the best off-cycle month in the history of both the Republican and Democratic parties. This cycle, to date, the RNC has more than doubled the Democratic National Committee’s fundraising efforts, according to the GOP, which also noted that the Democrats, as of last month, carried $7.3 million in debt.

“While Democrats focus on fighting President Trump, Republicans have prioritized voters and we have another record-breaking fundraising month—the highest ever off-cycle—to show for it,” RNC Chairwoman Ronna McDaniel told Fox News. “Voters are tired of Democrats’ petty politics and baseless witch hunts, and their shameful attacks have only energized our grassroots army and allowed us to lay the groundwork for Republicans to take back the House, expand our majority in the Senate and re-elect President Trump in 2020.” 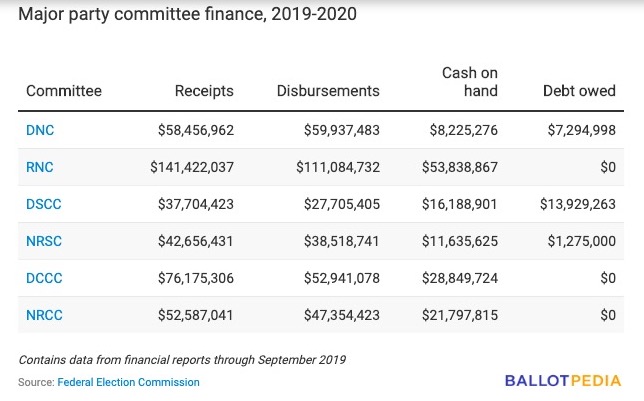 To be fair, the Democrats are in the middle of a race to determine the 2020 nominee, so it’s reasonable that the National Committee won’t raise as much until they have made their final selection.

But, historically, they’re still not as great at fundraising as Republicans.

The DNC is still reeling from having been purchased at a fire-sale price by the Clintons to ensure that she’d be the nominee in 2016. This was largely Obama’s fault with the bizarre strategy to alienate the small donors that pushed him towards the White House after his 2008 win. Hilariously, then-White House Chief of Staff Rahm Emanuel famously labeled the strategy as “f**king retarded” to activists.

Look at that! I can agree with Rahm Emanuel on something.

I wonder what he thinks of this push to impeach right before the 2020 election… because if he thinks it’s also “f**king retarded” then I’d agree with him once again.