LeBron’s silence on Daryl Morey’s Tweet Heard ‘Round The World was deafening. Now, we wish he hadn’t said a word.

Let’s face it, LeBron James isn’t the brightest crayon in the box, but surely even he could understand that it shouldn’t be controversial for Daryl Morey to tweet support for pro-democracy protesters in Hong Kong, right? Right?!

When queried by some reporters in a pre-game presser at the Staples Center in Los Angeles, LeBron gave some “thoughtful” answers on the Morey tweet. James said that it was a difficult week for the NBA and that the tweet was “misinformed” because Morey “wasn’t educated on the situation at hand” and didn’t consider the “negative repercussions” of free speech.

I swear I’m not making that up. 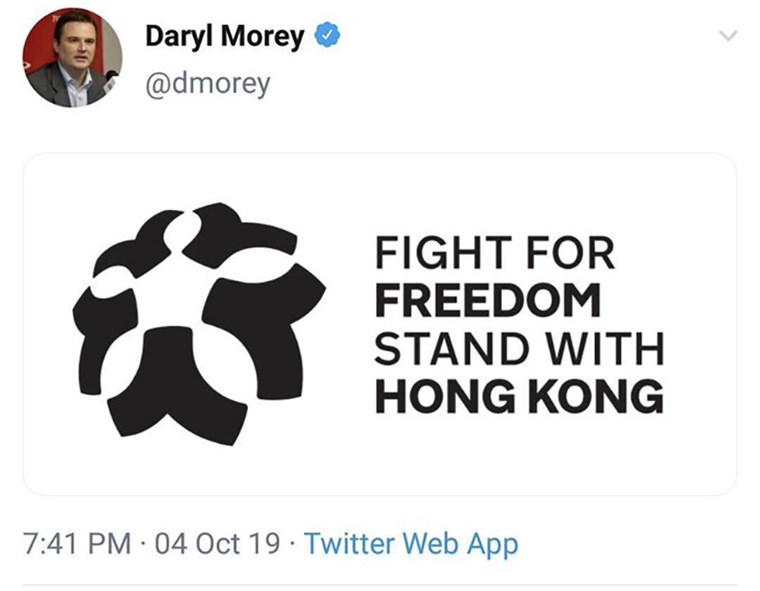 Moret shared the image and didn’t type a damned word, but everyone lost their minds anyway.

The comments that James gave made very little sense, “I don’t want to get in a word or sentence feud with Daryl Morey. But I believe he wasn’t educated on the situation at hand and he spoke. So many people could have been harmed, not only physically or financially, but emotionally and spiritually. Just be careful what we tweet, what we say and what we do. We do have freedom of speech, but there can be a lot of negative things that come with that too.”

Here is the video evidence that that statement was actually spoken by a human being named LeBron James:

Real talk this is maybe the worst take in the history of bad takes pic.twitter.com/4v16RjI9iA

That’s like some sort of Deep Fake video, right? Even LeBron can’t be that stupid.

LeBron James on if Daryl Morey should be reprimanded for his tweet pic.twitter.com/6hCE8vCyNn

Heavens to Murgatroyd! That’s alternate footage of the same statement.

He really did say that!

Now, it seems to me that LeBron is only concerned about the repercussions for the NBA and the market in China and not about the pro-democracy protesters who are railing against injustice and human rights abuses by an authoritarian regime.

Does that mean he’s unwoke? How can he rail against so-called human rights abuses in the United States and not say a damned word about the things that we’re all watching on the news or on social media every day? Or do the people from Hong Kong and the religious and ethnic minorities in China not count when it comes to human rights?

A good journalist would have asked LeBron questions like that.

But wait! There’s more! He says that he only speaks out on things that he is “incredibly knowledgable about” and that he just wasn’t as informed as he should be to comment on the situation.

He’s had a whole week to think it through. Even LeBron’s neurons don’t fire that slow, do they? After this presser, I’m beginning to wonder.

LeBron James on how he felt the NBA handled the situation in China and why he didn’t speak out pic.twitter.com/6DYCAs96IW

It certainly sounds like he was condemning Morey for expressing his views on Twitter because it could have cost the league — and therefore LeBron himself — something.

James goes on, “I believe he [Morey] was misinformed or not really educated on the situation. If he was, so be it. I have no idea, but that’s my belief. When you say things or do things, you’re doing it and know the things that can be affected by it and the families and individuals that can be affected by it. Sometimes it can be changed as well. Sometimes social media is not a proper way to go about things as well. That’s just my belief.”

So, basically, Morey can just shut the hell up on Twitter because he has ticked off the Chinese government.

Here’s a thought on that sort of attitude:

James later took to Twitter and tried to clarify his bizarre statements, but… it is LeBron, after all.

Let me clear up the confusion. I do not believe there was any consideration for the consequences and ramifications of the tweet. I’m not discussing the substance. Others can talk About that.

My team and this league just went through a difficult week. I think people need to understand what a tweet or statement can do to others. And I believe nobody stopped and considered what would happen. Could have waited a week to send it.

Do you know who else had a difficult week? The Uyghurs in Xinjiang where the NBA has one of its training camps.

These men China has blindfolded being taken on trains to unknown camps really sympathize with you LeBron. They had a rough week too. ? pic.twitter.com/9okxTNmr4D https://t.co/26Mvuo656n

Unfortunately, LeBron’s own words come back to haunt him.

*unless it negatively impacts me at all. @KingJames pic.twitter.com/KaRNWDydiZ

Dude is being thoroughly mocked on Twitter while being praised on China’s monitored social media platform, Weibo.

The early reception to LeBron James' comments were overwhelmingly positive online in China. “That’s why we love you,” said one user on the Twitter-like Weibo service, who called James “the spokesman of the NBA’s diplomacy department.” https://t.co/f1DUCvfEpo

This video is unbelievable. Remember, LeBron had a week to come up with this answer. China has to have this dude on its payroll.

We are so sorry for your pain. Not as sorry as those imprisoned in Chinese re-education camps, but pretty sorry.

LeBron educates Daryl Morey about the situation at hand pic.twitter.com/lzVEfqBvm0

Uighurs don't have enough money to buy his jerseys anyway.

Lebron in the next few months: Thank you President Xi for the great honor to debut my new sneakers at Re-education camp #11 in Xinjiang! https://t.co/803VJM1wT3

No one is confused, @KingJames. You are taking money from Communists and since you are ignorant about Communism, you don’t want anyone to say they are evil and mess up your gravy train. It’s all perfectly clear. https://t.co/KSazjajwGO

Of all the insults, this one has got to hurt the most:

A lot of people are surprised at how hard LeBron is getting dunked on for this, which can only mean they’ve never watched him play defense. https://t.co/BJWnvfisyU