Not surprisingly, Trump didn’t trust the media to deliver this message, he went straight to Twitter to get it out.

Trump has been criticized by friend and foe alike over what we were going to do about Turkey and the Kurds.

It was a complex situation. Turkey has made it clear that they were going to go in to attack a group they viewed as terrorists threatening their territory.

The Kurds have been a strong ally of ours in fighting ISIS and other regional powers, including Sadam Hussein.

But that doesn’t mean this is as cut and dried as we might think. Some of them really aren’t nice people to deal with, just the best option we have available to us. SOME of them.

Turkey (a NATO nation) has been telling us for months they were tired of waiting and were planning to deal with these people whether we liked it or not.

Trump had a decision to make with the few dozen soldiers we had there. Keep them there, and risk getting pulled into a new conflict, or pull them out, and get blamed for what Turkey was already about to do — and risk our relationship with the Kurds, being eclipsed with NEW relationships with Russia or others. 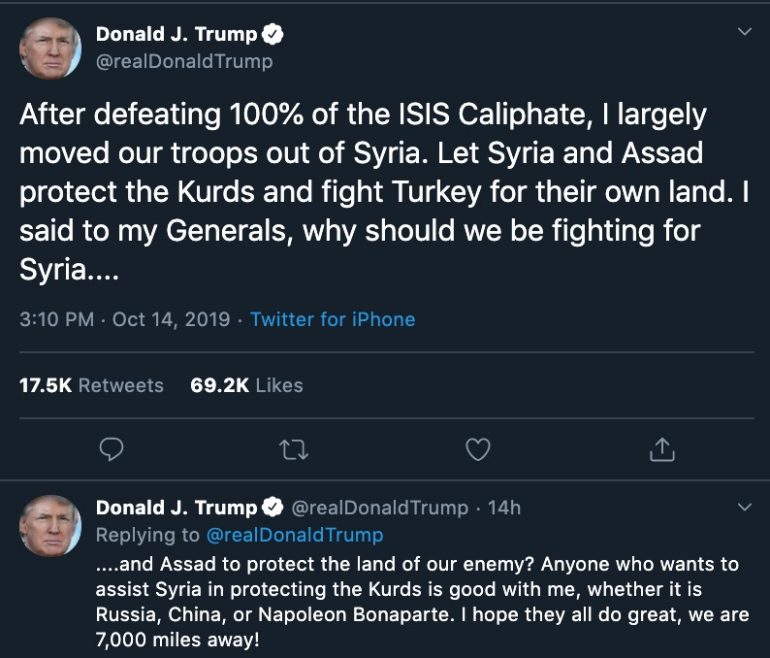 He has released a statement: 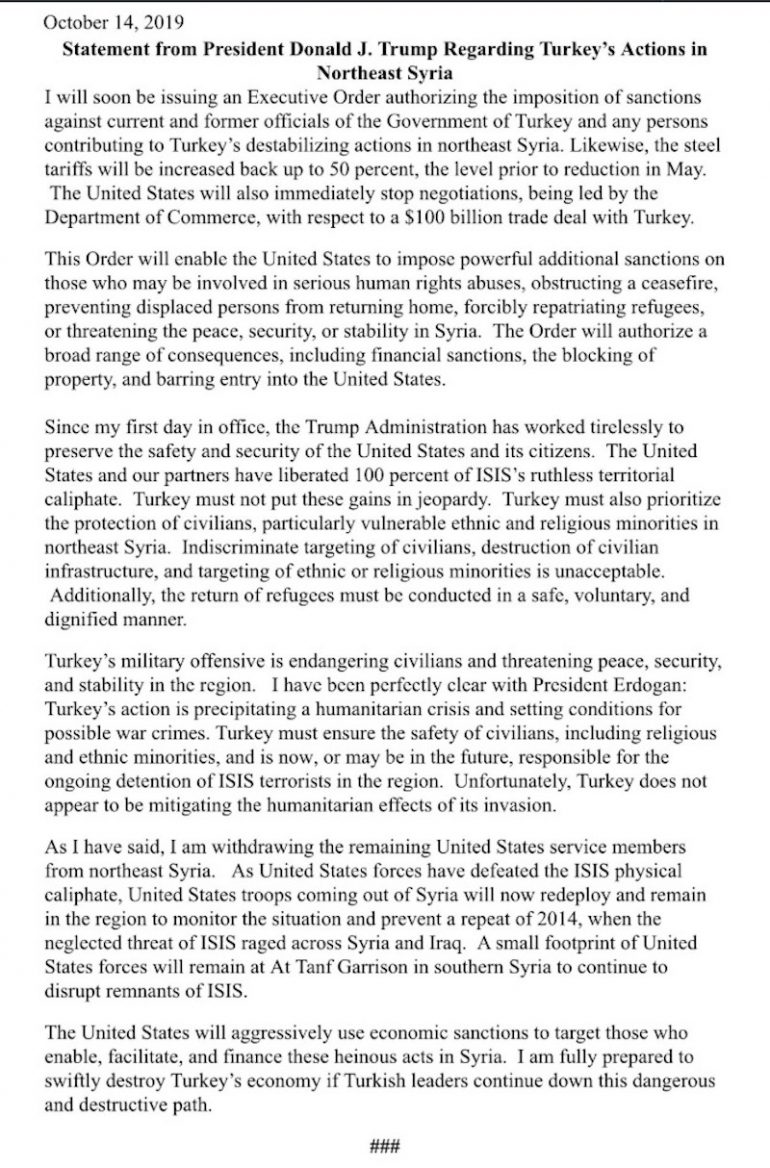 Among other things, he’s killing a $100Billion trade deal with Turkey and issuing sanctions against Turkey’s leader PERSONALLY, whom he holds responsible for this continuing attack on the Kurds.

For further context, here are some excerpts from a related press release.

SENIOR ADMINISTRATION OFFICIAL:  Thank you.  And thanks to my colleagues from both State and Treasury.  This was truly an indefatigable effort over the weekend for all of our departments and agencies, getting us to the point where we could take action this afternoon.  And great credit — great credit to our colleagues across the board.

As I’m sure you all know by now, as was announced by Secretary Mnuchin, NSA O’Brien, and the Vice President just now, the President spoke today to both General Mazloum and President Erdoğan.  He is fully engaged in the developments in Northeast Syria.  And we all firmly believe that the United States is the only party with the gravitas to arbitrate with both sides.

That said, the President took some very serious action today.  He signed an executive order authorizing the imposition of sanctions against current and former officials of the government of Turkey and any person contributing to Turkey’s destabilizing actions in Northeast Syria.

That was not the end of it.  The steel tariffs will be increased back up to 50 percent.  And the United States will also immediately halt negotiations being led by Secretary Wilbur Ross, who visited Turkey last month, with respect to a hundred-billion-dollar trade deal.

Given Turkey’s current economic weakness, the action today is deeply serious, and designed to focus Turkey’s attention on the gravity of the situation in Northeast Syria.  But we do remain committed to pursuing a negotiated resolution to the situation, which is why the President directed a senior-level delegation to depart for Ankara as quickly as possible to see what we can — if we can achieve a deal.

The President is deeply committed to ending the unnecessary violence and loss of life in the Northeast.  He is particularly mindful of the plight of religious minorities and any other humanitarian atrocities that may occur.

So, with that, I will turn it over to my esteemed colleague from the State Department.

SENIOR ADMINISTRATION OFFICIAL:  Thank you.  Turkey’s going into Northeast Syria — an area of surprising calm and tranquility in the middle of the chaos of Syria and the uncertain situation in Iraq — has upturned one of the real success stories of the International Coalition to Defeat ISIS and also our overall Syria policy of a resolution to the long-running civil war and the containment and expulsion of Iran.  These are crucial diplomatic and security interests for us and for the region — defeating ISIS, getting Iranians out, and a political solution.

So, what we’re trying to do now is, first of all, restore the situation as best we can via ceasefire, by a reconciliation of the various interests that are in play at this time in the Northeast, and ensuring that the various forces — which involve not just our partner, the SDF; our own troops, who are still on the ground; the Turkish military and their associated and, in many cases, ill-disciplined and very violent militias; as well as Russian and Syrian forces — to get them all to hold in place, and to then come forward with a set of plans to resolve the underlying reasons why Turkey went in to Turkey’s — to meet Turkey’s security needs — its legitimate security needs — and the needs of the people of Northeastern Syria.

I continue to believe that the very small number of troops we had in the area that was being targeted was something — as Secretary Esper has said — we could not responsibly leave them there when the Turks were obviously geared to go in.

But make no mistake about it: This was an action of President Erdoğan’s.

SENIOR ADMINISTRATION OFFICIAL:  And I just add, from a DOD perspective, that the forces that we — the Secretary withdrew from the Northeast — you know, that dozens of forces — were in an area that was 40 kilometers long and 30 kilometers deep.  The idea that somehow those couple dozen forces would somehow be in a position to stop an invading army is just not logical, and it would be extremely dangerous to request those forces to achieve that mission.

So, rather than them being encircled and potentially being in the crossfire of an ongoing conflict, we had to focus on the force protection of those special operators.

Mayorkas Admits At Least 12K Out Of 17K Illegals From Del Rio Bridge Have Been Released Into U.S.
The Lid