Things have REALLY taken a turn when ‘Borat’ and WaPo push a ‘serious’ policy that is completely beyond parody. Welcome to 2019, folks, it can only get weirder from here!

Take a moment to truly appreciate the irony of this story.

We have two different characters, Sacha Baron Cohan (aka ‘Borat’) and the Washington Post arguing — wait for it —AGAINST free speech.

No, this isn’t satire.

Sacha Baron Cohen is better known as his alter-ego ‘Borat’… a fictional persona explicitly designed to provoke, offend and transgress as many social and PC taboos as he could possibly manage to transgress.

And he made himself a lot of money doing it. From there, he went on to punk as many public figures as he could manage to punk by pretending to be something he was not, and trick them into saying something embarrassing or humiliating.

One of his more famous victims, Joe Walsh was duped into praising a fake Israeli children’s weapons training program:

Walsh responded in the segment, “The intensive three-week kinder-guardians course introduces specially selected children from 12 to 4 years old to pistols, rifles, semiautomatics and a rudimentary knowledge of mortars in less than a month. [In] less than month, a first-grader can become a first-grenader.” — Yahoo

Whoever wrote that line was probably pretty proud of that absolutely embarrassing turn of phrase.

The creator of Borat wrote a piece that WaPo ran, explicitly calling for censorship of ideas by the six most powerful gatekeepers in Silicon Valley.

Those voices which are deemed ‘acceptable’ will be allowed to speak, and those who conflict with them will not.

I get it: I’m one of the last people you’d expect to hear warning about the danger of conspiracies and lies. I’ve built a career on pushing the limits of propriety and good taste. I portrayed Borat, the first fake-news journalist, along with satirical characters such as Ali G, a wannabe gangster, and Bruno, a gay fashion reporter from Austria. Some critics have said my comedy risks reinforcing old racial and religious stereotypes.

I admit that most of my comedy over the years has been pretty juvenile. However, when Borat was able to get an entire bar in Arizona to sing “throw the Jew down the well,” it revealed people’s indifference to anti-Semitism. When, as Bruno, I started kissing a man in a cage fight in Arkansas and nearly started a riot, it showed the violent potential of homophobia. And when, disguised as an ultra-woke developer, I proposed building a mosque in one rural community, prompting a resident to proudly admit, “I am racist, against Muslims,” it showed a wide acceptance of Islamophobia.

…The ugliness my jokes help reveal is why I’m so worried about our pluralistic democracies. Demagogues appeal to our worst instincts. Conspiracy theories once confined to the fringe are going mainstream, fueled in part by President Trump, who has spread such paranoid lies more than 1,700 times to his 67 million Twitter followers. It’s as if the Age of Reason — the era of evidential argument — is ending, and now knowledge is delegitimized and scientific consensus is dismissed. Democracy, which depends on shared truths, is in retreat, and autocracy, which thrives on shared lies, is on the march. Hate crimes are surging, as are murderous attacks on religious and ethnic minorities.

All this hate and violence actually has something in common: It’s being facilitated by a handful of Internet companies that amount to the greatest propaganda machine in history.

Only a few paragraphs in, and he’s already run aground a couple of times.

For one thing, he’s being awfully selective about who is doing the lying. And how many of those lies are actually a placeholder with ‘disagrees with our narrow Democrat New York/Beltway consensus’?

You’ll perhaps notice we’re not talking about ‘Mueller time’ anymore? Because the wheels have fallen off their ‘Russian Collusion hoax’… and the Pulitzer prize winners have not been asked to return them.

Also, the companies he chastises for not being ‘woke’ enough have already gone through a significant anti-Right purging process since they got humiliated in 2016.

Having MULTIPLE voices talking is a GOOD thing. It allows ideas to be challenged.

Right now, for example, John Solomon is digging up all kinds of primary documents that the Biden campaign would rather none of us knew about. As a reward for his trouble, he’s having his name dragged through the mud by ‘respectable’ journalists who don’t color outside the lines of consensus.

Unfortunately for his critics, however, a cursory review of his reporting on Russia shows that he has a far better track record at reporting facts rather than propaganda through the entire RussiaGate Hoax.

Where would history be if journalists were that cautious, say, in the 1970s Watergate era? Nobody would have touched the story.

And now, the balance is tilted totally in favor of the Democrats. Well, if nobody is willing to ask hard questions about their ideas and actions, what stops them from sliding into corruption?

He lectures us about the homophobia, and hate crimes, and violence. How is any of that solved by making us more like China where you can’t even put up an image of this guy without catching Hell from your government. 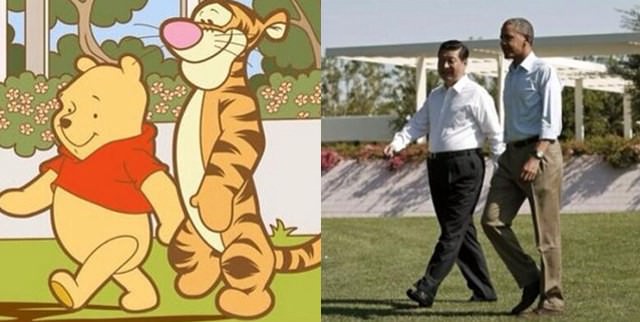 The antidote to bad speech is not silence. It’s exposure and refutation by better speech.

If anyone OUGHT to understand this, it’s a comic and a newspaper.

But here we are in 2019, where even our satirists have become beyond parody in real life.

THEY can be trusted to speak freely… it’s the rest of us that should be denied that privilege.