Welcome to the wonderful world of Leftist ultimatums. Does she even KNOW who she is hurting by making this stand?

Set aside the religious v. sex angle of this story for a moment and consider the rank arrogance of this chick’s demand.

Let’s swap out a different featured charity and see how her demand play out. Take your pick. Maybe it’s the Humane society, a program for at-risk youth. Maybe it’s a literacy or hot-lunch program for the homeless.

Now imagine that some self-aggrandizing hothead decides she doesn’t appreciate the niche interests of that charity and lays out an ultimatum that they change their priorities and start dumping money into a solar panel program.

Why the hell should anyone care about her unreasonable demands?

That gives context for what happened when an English singer was offered the privilege of performing at the Dallas Cowboys halftime show saw fit to put a gun to the head of the Salvation Army.

As though SHE was doing the NFL some kind of favor by deigning to appear.

On Tuesday, English singer and songwriter Ellie Goulding warned that she will cancel her scheduled performance on Thanksgiving at halftime of the Dallas Cowboys football game unless the Salvation Army makes a “solid, committed pledge or donation to the LGBTQ community.”

After excitedly announcing her appearance, she sang the praises of The Salvation Army on her social media account:

On Tuesday, she added on Instagram, “Ok so maybe hairnet not my strongest look but thank you @salvationarmyus for having us in New York. As you know, I have spent a lot of time in shelters in London, and this was my first time in NYC… The Salvation Army annually helps more than 23 million Americans overcome poverty, addiction and economic hardships through a range of social services. By providing food for the hungry, emergency relief for disaster survivors, rehabilitation for those suffering from drug and alcohol abuse, and clothing and shelter for people in need. I sat and spoke to several people who had come in from the bitter cold for some food (they serve to over 150 per day here), warmth and perhaps a chat with one of the volunteers.”
Source: DailyWire

Sounds pretty good so far, right? It didn’t take her long to cave to the ever-present outrage mob who LOATHE anything that has even a whiff of Christianity to it. And are willing to lie to destroy them.

But after fans of hers convinced her that the Salvation Army was hostile to the LGBT movement, as FOX4 reported, Goudling wrote, “Upon researching this, I have reached out to The Salvation Army and said that I would have no choice but to pull out unless they very quickly make a solid, committed pledge or donation to the LGBTQ community. I am a committed philanthropist as you probably know, and my heart has always been in helping the homeless, but supporting an anti-LGBTQ charity is clearly not something I would ever intentionally do. Thank you for drawing my attention to this.”
Source: DailyWire

Does The Salvation Army discriminate against people? Nope.

She CLAIMS she did some research. Sure she did. She was a regular Nancy Drew.

Here’s what their own website says. (We found it in our first search under an Anti-Salvation Army hit piece by Huffpo).

Yep, that looks like some REAL hostility against their LGBT clients, you ignorant jackass. 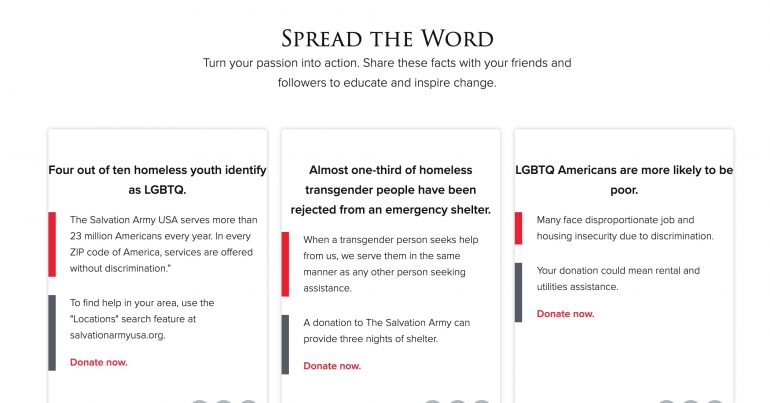 Hey ELLIE GOLDING — how about you make your restitution as public as your defamation, and sign over whatever amount you would have been earned for this gig to the support of The Salvation Army with an affirmation that what you publicly said about them was a lie.

And after that, look up the REAL history of the Salvation Army and see William Booth’s role in breathing life back into England in the 1850s by helping the very people that society turned their back on. Addicts, prostitutes, thieves, and the destitute were being shown the life-changing love of Christ.

How ironic that you are allowing yourself to be weaponized in the effort to shun The Salvation Army — and other Christian groups like it — from polite society.

What a tremendous display of your gratitude for all they have done for you.

Who’s the REAL intolerant one here?