Tariq Nasheed has been no friend of conservative politics. He’s a very vocal, very opinionated activist. But something has changed recently that should make partisans on both sides take note.

Democrats, fortunately, are unlikely to heed this message, in much the same way they dismissed Michael Moore in 2016 when he warned Democrats that Trump had gained traction among the working class in the rust belt.

Michael Moore didn’t mean it as praise for Trump so much as a criticism of Democrats.

Rather than guess at what Tariq means with his recent comments, we will let them stand on their own.

For anyone familiar with some of his aggressively anti-Trump statements in the past this will come as a surprising wrinkle in how the drama surrounding our march to 2020 is unfolding.

For anyone unfamiliar with him, Tariq’s defining political issue should be obvious right away:

So why should we honestly support the democrats? https://t.co/204xv3v7zm

Let’s add a screen cap of that text just in case the inevitable pile-on leads him to pull it. Although, to be fair to Tariq, he’s not exactly the apologize-for-what-has-said-to-offend-you kind of a guy any more than Trump himself is. 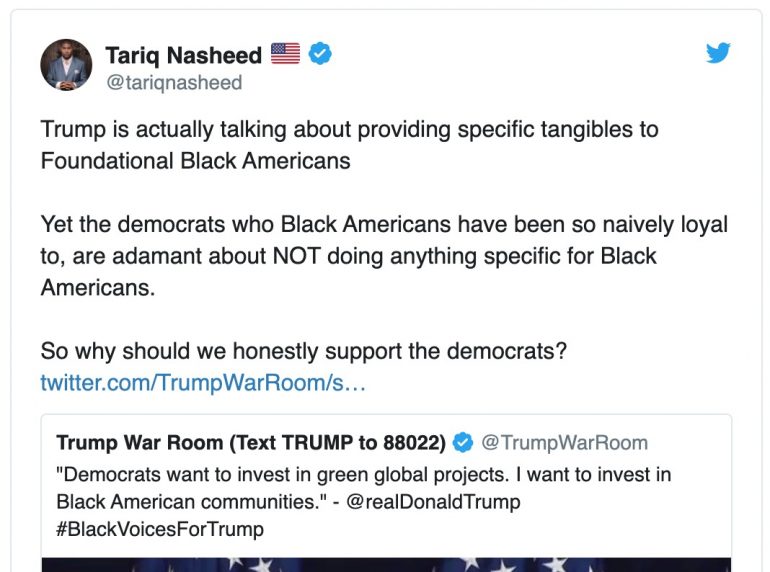 Remember way back during election 2020, when Trump issued a very specific challenge to black voters? He asked them one question: what the hell have you got to lose?

He encouraged them to look around at the craptastic results their endless parade of Democrat leaders had delivered for them and weigh the risk and reward.

They say insanity isn’t trying a new approach, it’s expecting different results from the same one, right? So backing Trump was the sane choice.

And now that the promises he made are starting to take hold, people like Tariq and Kanye have started to notice.

WTF? CNN Calls Kanye A ‘Token Negro’ And It Gets WORSE!

Can You Name One Person Who’s Made A Bigger Pro-Christian Impact Than Trump And Kanye?