The whole POINT of FOIA requests is so that our supposed ‘public servants’ can be kept accountable, and don’t start acting like our ‘masters’.

Unfortunately, as we have seen from the behavior of certain members of upper management in both the FBI and the Intelligence Community, it doesn’t take much for ‘civil servants’ to forget who is REALLY supposed to be calling the shots.

You know, the people who were actually elected to positions of responsibility. The ones who can get thrown out if the voters don’t like what they see.

Obstructing the very tools that citizens, journalists, and sometimes even Congressional oversight have to hold these employees accountable is dangerous because it removes an important safety-net of accountability.

What possible justification is there for a 12-year waiting period? Is it just a staffing shortage? Nope. They need to settle questions of privilege… and apparently it will take a VERY long time to do that.

It will take long enough that any public servants who might have actually needed to be called to account — or even answer clarifying questions — will have been long-since retired.

And by that time, anyone in, say, Saudi Arabia that might be politically damaged by the information contained in there will be long past being bothered by such an ancient story… if they’re even still around to be damaged by it.

To all, please retweet this extraordinary #deepstate response to my FOIA for 9/11 Commission documents. See attached letter; they estimate it will take 12 years to respond. WTF? pic.twitter.com/NGDOm7reh2 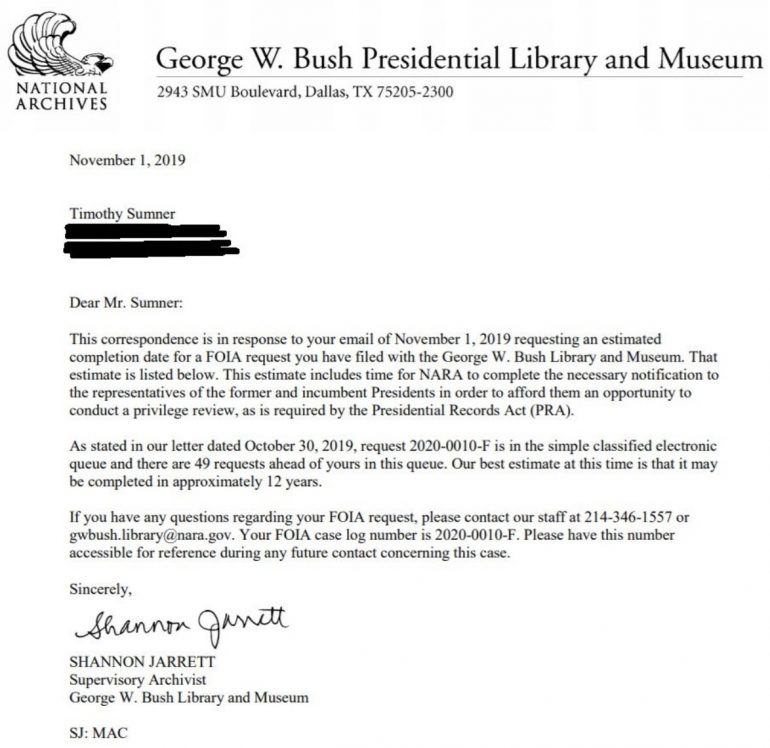 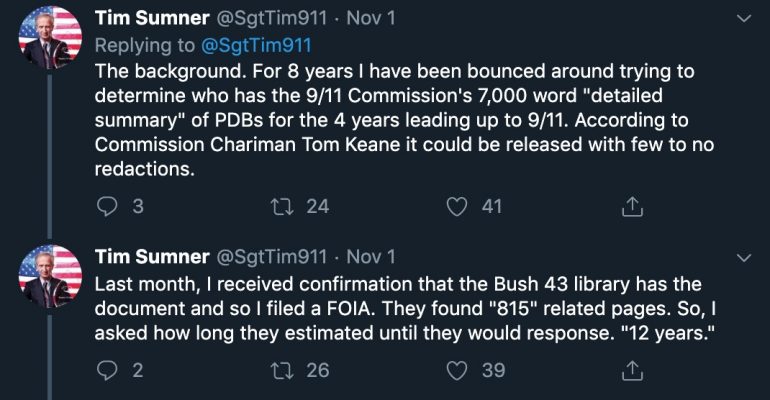 I first learned of the 9/11 Commission’s review of PDBs in 2011. “Kean said when he headed the commission, “Most of what I read that was classified shouldn’t have been.” He said. https://t.co/1jzyi6tClF

In the meantime, questions raised by these various inquiries will continue unanswered.

This is hardly the only place we have seen such issues.

The General Flynn case is in limbo because it is alleged that exculpatory (Brady) information that would have exonerated Flynn was deliberately withheld by the Prosecution. Worse still, evidence produced against him was falsified to make it seem more damning.

Remember the email exchanges between Strzok and Page? Early reporting of that story indicated many missing texts in those exchanges. Why were they missing?

We have heard repeated complaints from Republicans in Congressional oversight positions saying that Civil Servants had refused to provide information.

And Judicial Watch has made a habit of taking FOIA requests to court, where judges would FORCE the swamp to produce information they tried to hold back.

This isn’t just a workload issue, it’s a ‘transparency’ and ‘culture of secrecy’ issue.