Twenty years ago, Mark lost the use of his arm in an accident. Last week, it came back from a taxidermist.

This is definitely one of those stories that the faint of heart may want to think twice about reading. But honestly, if you’re a regular ClashDaily reader, it’s no worse than some other stories we’ve had to cover over the years.

This story began 20 years ago when a 17-year-old Mark Holmgren borrowed his brother’s motorbike. It was more than he could manage, he lost control and wiped out.

“I was just driving too fast, turned the corner and I wiped out. I tore the nerves in my shoulder. It was a brachial plexus injury and from that day I could never use it. Couldn’t move it, couldn’t feel it.”
Source: CTVNews

Nerve damage in the shoulder cost him the use of his arm. He just left it there thinking that one day, medical science would be able to do something to salvage some kind of use out of it through medicine, robotics or … whatever.

Twenty years later, he’s no longer holding his breath for science to solve his problem. In April, he decided to cut loose the dead weight.

But he wasn’t about to simply consign his useless arm to oblivion. He put it to use.

About a month after the surgery, Holmgren got a call from the lab saying his arm was ready to be picked up.

“I carried it out of the hospital in a garbage bag,” said Holmgren. “I actually kept it in my freezer for about a month.”

He admits that shopping around and asking taxidermy businesses to clean a human arm was a bit of a challenge.
Source: CTVNews

You can imagine. But he kept shopping around until he found someone willing to take on the work. 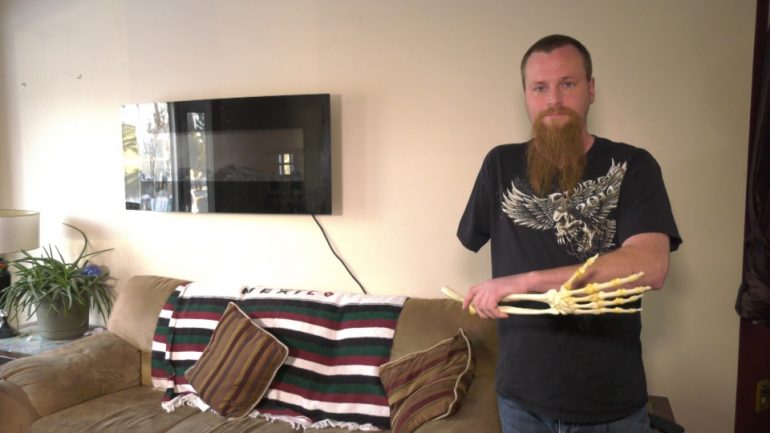 “I went and dropped it off, and got it back just before Christmas.”

Holmgren even brought his skeletal arm to Christmas dinner with his family.

The Edmontonian plans to show more friends and family his limb before retiring it.

“I’m just going to keep it probably behind the sink in the kitchen. I’m happy I did it. It’s just not for everybody.”
Source: CTVNews

What do our readers think about his unusual way of keeping a piece of his past, so to speak?