Pelosi. ‘Master Legislator’. Not just undermining the foundations of the Republic, she’s taking her own party down with it.

Great going there, Nancy. I’m sure history will remember your name fondly. Right up there with Custer.

That plan of yours isn’t panning out as well as she has hoped, and now she’s in too deep.

Molly Hemmingway said as much in the Federalist, which Mark Levin cited this way: 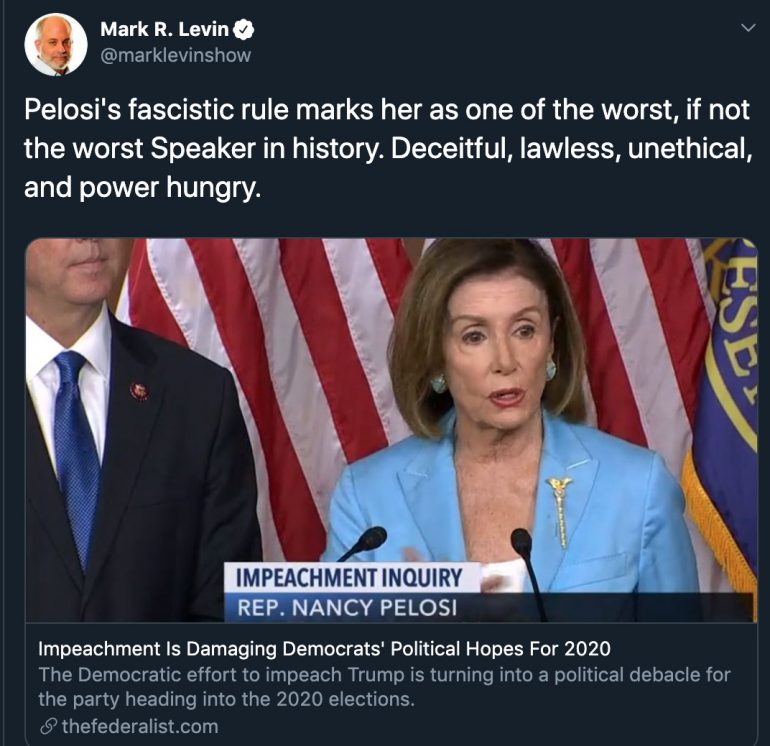 No, really, Mark. Don’t hold back, tell us what you REALLY think about her.

Impeachment wasn’t very popular to begin with, and under the spectacular mismanagement by Schiff and Nadler, has become even less so.

While a few Democrats joined with Republicans in opposing impeachment, support comes only from Democrats. Democratic leaders previously said that impeachments that weren’t bipartisan were illegitimate by definition.

But they don’t appear to be even trying to make this impeachment seem legitimate.

Pelosi had Schiff handle the heavy lifting of impeachment because she did not trust Rep. Jerry Nadler to do it, even though he chairs the committee that has proper jurisdiction. Nadler’s hearing yesterday gave an indication of why she worried about him playing too prominent a role. His witness list was a perfect example of how he bungles up processes. Of his three witnesses, one was an Elizabeth Warren donor who previously said she couldn’t stand to walk on the same sidewalk as the Trump hotel. Another witness previously said Democrats didn’t even need evidence of crimes committed by the president in order to impeach him. And their third and final witness previously helped run Dianne Feinstein’s anti-Brett Kavanaugh smear operation in 2018. This is not who you show to the world to demonstrate your independence and even-handedness.
Source: Federalist

Even worse for them, all this energy spent has come at the expense of EVERY other policy they said they were coming here to represent.

Russia collusion became obstruction which became Ukraine, but it’s really no secret. Any number of Dems were already beating the war drums for impeachment long before whatever their latest justification for it might be had ever happened.

Where does that leave us?

Pelosi had hoped to have an extremely quick impeachment that would slake the Democratic party’s anti-Trump bloodlust while still leaving time for legislative accomplishment and fulfillment of campaign promises. Instead, it’s dragging on and failing to catch fire, meaning that Pelosi’s committee chairmen are having to go back to the Russia well in search of impeachable material against Trump. It’s reminiscent of the gambler at the casino who responds to heavy losses by doubling down on his bets in the hope he can make back his money. It would be much wiser for him to cut his losses and leave the casino before making things worse, but for some reason he just can’t put down the dice. Democrats would be much better off in the long-run if they ended the charade now, perhaps opting for a quick censure over a full-blown impeachment vote, and moved on to passing bills they promised their voters they would pass.

Now Democrats might not be able to vote until after Christmas or potentially even next year, precisely the long and drawn out scenario they had hoped to avoid.
Source: Federalist