Was what she said deeply offensive, or is everyone reacting to the buzz instead of the story itself?

In our hyper-connected world, it’s easy to get caught up in the ready-fire-aim responses to real-time unfolding of whatever it is we agree to get wound up about on any given day.

One tweet, one video clip. One dumb statement or embarrassing gaffe and everyone knows about it and has voiced an opinion about it in mere minutes.

Pretty remarkable, if they react in less time than it takes to watch the quote in its proper context. You might even think the quote doesn’t actually matter as much to those people as what they are TOLD they should think about how to react to it.

But does the outrage REALLY match the hype?

This looks like another case of the ‘very fine people hoax‘ phenomenon. Two groups approach the same data set with very different assumptions and come away with absolutely contradictory interpretations.

In short we’re dealing with a case of: 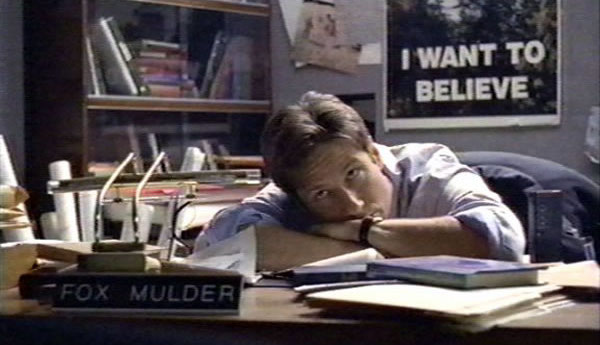 But the facts don’t really care what you WANT to believe. They’re just facts. What do we know?

We know that human nature is sufficiently complicated that it is entirely possible for different groups of people to see the same symbol and come away with very different understandings of their meaning.

Even the Swastika, for all the horrors we would associate it with today, has another, entirely benign meaning. You can’t always assume that the meaning YOU assign to a symbol is the same one someone ELSE will. This is the point from which the conflict springs.

If you’re a traveller from the west who has been to Asia, there’s a high chance that you’ve noticed the swastika symbol dotted around and felt a little uncomfortable. Perhaps you’ve even felt a bit outraged. It’s painted on the entrances and doorways of homes and temples, marked on financial statements and is often constructed as a mandala for rituals such as weddings or welcoming a newborn. The swastika holds much reverence within the major religions of the east- Hinduism, Buddhism and Jainism – and is conducive to well-being, prosperity and luck. Because of that, it’s found everywhere.
Source: CultureTrip

Nikki Haley was Governor of South Carolina. As such, she is probably more familiar with the local culture and beliefs there than someone who gets their panties in a bunch two or three timezones away.

She is well aware of the checkered history of the Confederate flag, and how different people associate different meanings with it.

For some, all they can see is the embodiment of a racist message that divides white and black, the preferred flag of the KKK. (But if the flag should forever be stained by that taint, why not the Democrat party that spawned the movement, as well?)

For others, it represents their forefathers, their communities, regional pride, history and a whole lot more. For them, the fact that miserable bigots waved that same flag didn’t stain the value of it any more than a coward flying Old Glory would demean our American institutions.

Nikki Haley is doing a book tour and the associated interviews. She was asked about her time as Governor, and the crisis that arose in response to Dylan Roof’s racially motivated murder.

You can even watch the 1:22 for yourself, and actually KNOW what she said… and be ahead of most of the commenters on the internet.

That Nikki Haley clip is 1:22 long and nobody has watched it.

Here’s a cross-section of reaction to one guy baiting the public with a carefully-chosen tweet about her interview… starting with the ones that didn’t think she was out of line in what she said or how she said it, before moving on to those who are (supposedly) absolutely incensed by it.

You really had to work that wording hard to produce this from what she actually said, my man. 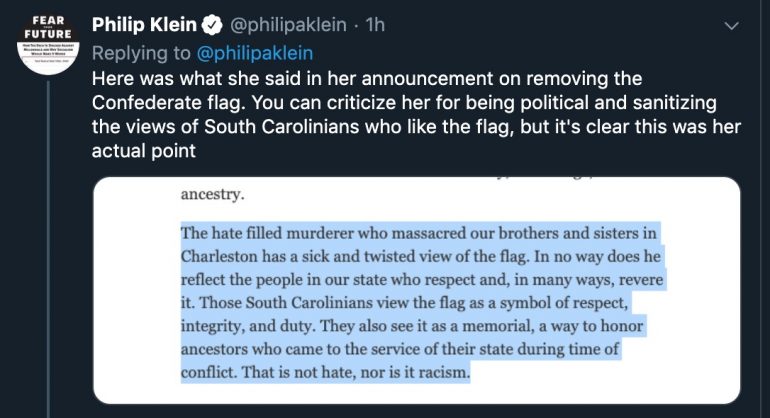 This is not new. Even in her 2015 speech to remove the flag, she said many in South Carolina see the flag as “a memorial, a way to honor ancestors who came to the service of their state during time of conflict. That is not hate, nor is it racism.” https://t.co/NZehy007D2 https://t.co/NKjhRUVpiy

A middle-of-the-road reaction disagreeing with her idea, but granting her an honest intent:

What Nikki Haley is saying about the Confederate flag is not accurate, but it’s easily recognizable as an effort to persuade older white southerners to put the stars and bars down in a way that doesn’t generate knee-jerk opposition.

Remember that brief period of time when Nikki Haley was considered the adult in the Trump Administration? Welp, she just failed 8th grade social studies with this take.

Unless there is another Dylan Roof who was a confederate general or a KKK grand wizard in 1915. https://t.co/TNJPIWJaWa

Still puzzled by this crackpot theory that Nikki Haley is “a good Republican,” which sounds like an oxymoron to me. https://t.co/89mF9AwpM0

Nikki Haley has long been a racist and her governorship of South Carolina was plagued with injustices she inflicted on marginalized communities.
Dylan Roof was a terrorist and a White supremacist. Just like his ancestors who fought for the Confederacy. She’s on that bullshit. https://t.co/60WV7QaJ9z

A reminder that Nikki Haley is just as despicable as every other Republican, and coverage of her should always reflect that. https://t.co/ZgaoiBKQbv

Switching gears from accusatory to condescending…

Can someone tell Nikki Haley that these people she's going to bat for will never see her as equal no matter how hard she sells out to yt supremacy? https://t.co/bNSCrbmVMH

We’ll wrap up with a fierce tweet in defense of Nikki Haley and her record after she had been called all these miserable things.

Nikki Haley got rid of the confederate flag in South Carolina. She was the first brown, first female governor of South Carolina. She's dealt with more racism and hatred than your white ass and it pains you to no end that she's a republican.

The moral of the story, for all of us, is simple: the next time you find yourself tempted to be outraged over something you see on the internet. Take the minute and twenty two seconds (or however long) to make sure you’re not about to make an ass of yourself.