Does this derpy little dope realize he just gave the game away? If there’s more ‘damning’ evidence, why did they hold it back?

The supposed point of impeachment was to expose ALL of Trump’s alleged wrongdoing and hold him accountable for it. If they have other things they can ‘get him’ for, and have not made the case against the President with them in their rush to judgment, what does that say about Pelosi’s grand claim that this was about the capital-t Truth and justice and the defense of the Constitution?

They are already moving onto their NEXT subversive attack. But should that really surprise us? From the moment they lost power in the House, Senate and Presidency they have been an obstructionist #Resist movement Hellbent on destroying the President.

Democrats have put America through a 3-year nightmare as they've spared no effort to impeach & remove @realDonaldTrump from office.

And, if & when the Senate exonerates the President early next year, they're already promising to return to their vindictive efforts. pic.twitter.com/krzRv1ebUd

Al Green’s own quote about impeachment being necessary lest Trump win 2020 is one of the more damning pieces of evidence against them.

In May of 2017, Texas Rep. Al Green became the first Democrat in Congress to support impeaching President Donald Trump. Trump had, at the time, been in office for just four months.

Since then, he’s forced a House vote on impeachment three times, each one garnering more support than the last.

…Barring some unforeseen, earth-shattering revelation, it seems very unlikely the Republican-controlled Senate will vote to remove Trump from office, and when that time comes, Democrats seem poised to simply move on and focus their energy on the 2020 election.

“My prayer is that the Senate will take the articles seriously, that the President will be found guilty, and he’ll be removed from office, but if he isn’t, the constitution allows for additional articles of impeachment to be filed,” Green told BuzzFeed News on Tuesday. “If the president commits impeachable offenses, the president can be impeached more than once … so if the Senate doesn’t do its job and the President commits impeachable acts, he can still be impeached, and he can be impeached for impeachable acts that he’s already perpetrated that were not a part of this impeachment.”
Source: Buzzfeed

They want the President’s scalp. And they really don’t care how they get it.

Oh, and one last thing.

Does the photo Al Green is standing beside in his demand for Trump’s impeachment look familiar? 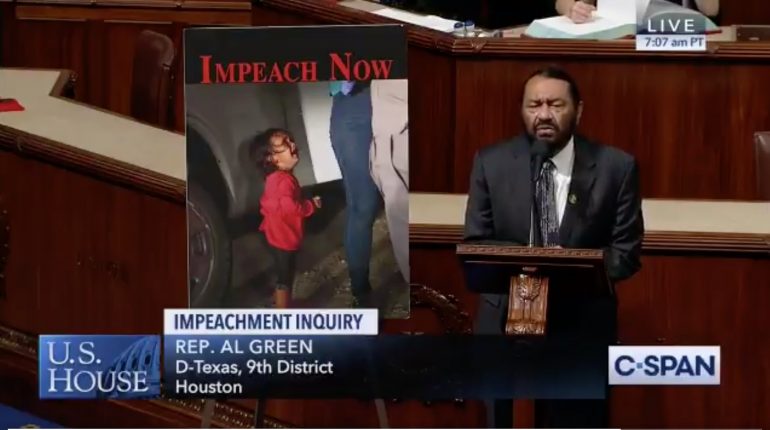 It’s the same photo we saw on the cover of Time Magazine.

The same one that we reported about here:
Fake News: Time Confesses Cover Story Of Border Kid Separated From Mom Never Happened

But the facts never really DID matter for their rhetoric, did they?