Here is reason 27,392,715 you should never trust leftist ‘news’ sources. If something seems a little crazy, check your sources before embarrassing yourself on social media.

Marianne Williamson was a favorite of many on the Right because she was so very entertaining. She didn’t even TRY to hide the fact that she’s straight-up loopy.

Putting it out there like that deserves a little bit of respect.

It doesn’t make her any less LOOPY, though. And she gave us yet another reminder of why we don’t actually take her seriously.

This is a woman who gets furious when she’s told that she’s unserious and not prepared to run. pic.twitter.com/3uC8Nqfidj

Two minutes later she added this… 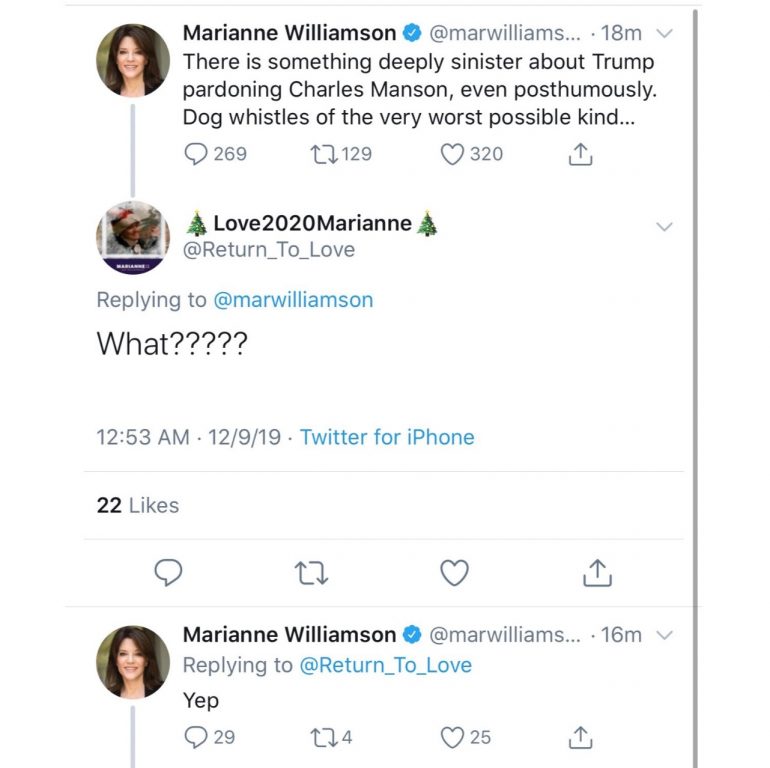 So obviously, she was convinced this was true.

While it originally came from a parody site, she probably picked it up from someone reposting a story from the DailyKos who stupidly ran it the same day. Not that something that blatantly stupid could ever hurt the credibility of a dumpster fire site like the Daily Kos. Here’s a screenshot including both the DailyKos header and the Trump Pardons Charles Manson headline, dated Nov 16. (A small disclaimer mentions that ‘this content is not subject to review by Daily Kos staff prior to publication.) 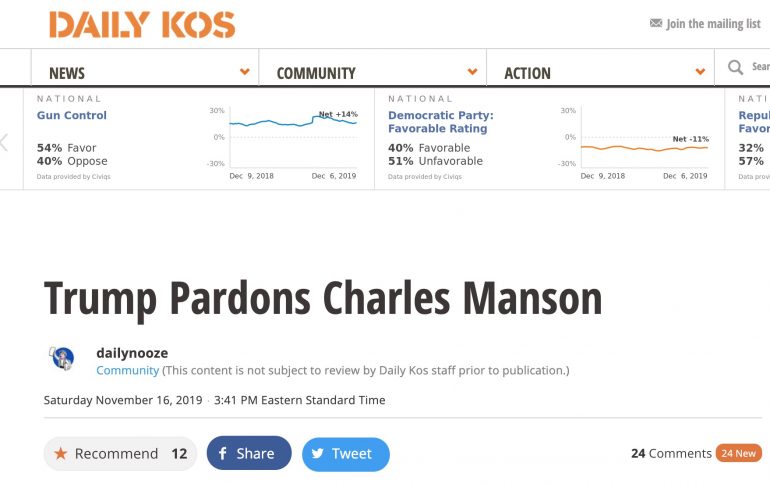 shes referring to this, which is like the Onionhttps://t.co/DJqhGhl4Cx

Open mockery, leveraging it against someone else:

Jim Acosta is totally going to shout at Trump if he thinks Charles Manson should be pardoned.

The ‘I have questions’ response…

In spite of myself I’m genuinely interested to know who Marianne Williamson thinks the (nonexistent) pardon of Charles Manson would be a dog whistle for. pic.twitter.com/nAEIJ7Pp7Y

A selection of headlines to appear:

No, Trump Did Not Pardon Charles Manson

Who is Charles Manson? Five Things You Should Know.

Actually, The President Should Pardon Charles Manson. Here’s Why.

And the least enjoyable of the lot — the dutiful fact-checker.

Note only absurdly false, but impossible. Manson was convicted on state charges, which the president cannot pardon. ?

Williamson is now burying all of her related tweets.