His defense is almost as lame as his tweets. Almost.

Joe Lockhart is a political analyst at CNN who was a former Clinton White House official.

On Wednesday, Lockhart, who is covering the Senate impeachment trial of President Trump tweeted, “Overheard convo between two Republican Senators who only watch Fox News. ‘is this stuff real? I haven’t heard any of this before. I thought it was all about a server. If half the stuff Schiff is saying is true, we’re up shit’s creek. Hope the White House has exculpatory evidence.[‘]”

After the tweet started getting some pushback, he tweeted, “Ok maybe I made up the convo, but you know that’s exactly what they’re thinking.”

It turns out that Joe isn’t just a former Clinton White House official and a CNN political analyst — as Stephen Miller pointed out, he also hosts a podcast called “Words Matter.” 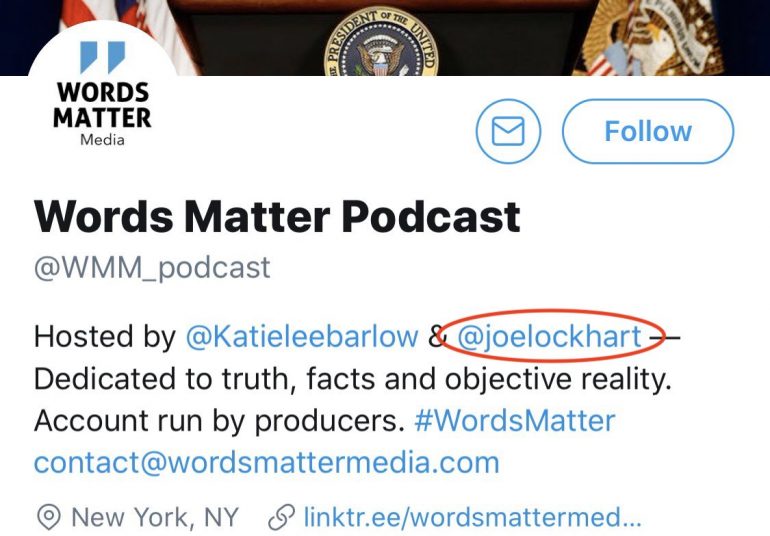 Some of the conservative blue-checks dragged him for his ridiculous tweets.

Yeah, this happened. Don’t take up screenwriting, Joe. You suck at dialogue. https://t.co/YhEO6NLToO

You would think someone who's attempting to cover Trump's impeachment trial seriously wouldn't willingly mislead his audience and spread disinformation in a sad attempt at satire. https://t.co/B7L8E5HaiH

Hey, @CNN—will there be any consequences for your Political Analyst sharing fake news on Twitter?

Or will he continue to be allowed on air just like the rest of the Never-Trump liars you give a platform to?

Did I tell you the one about the CNN analyst who spread a false narrative, watched it go viral, then waited 10 minutes to admit he made it all up?

This is the bullshit that discredits news organizations.

Lockhart attempted to diffuse the situation by saying it was all “satire” but Fox News is clearly a problem because Fox viewers are ignorant having been sheltered from the predominant leftwing news bias. 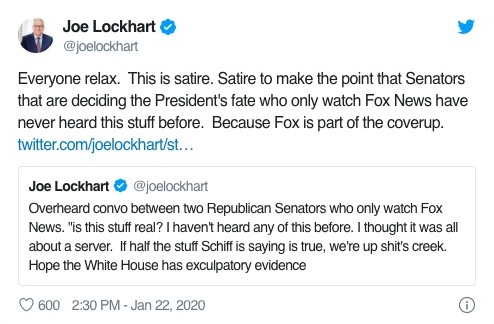 Sure, it could be that. Or that the Media(D) is selectively covering the news and inserts bias into reportage, Mr. CNN Analyst Who Used To Work For A Democrat President. Fox News and MSNBC can tilt right and left respectively, but CNN is supposed to be the middle-of-the-road, unbiased news that gives equal time to both sides. Is that happening, genius?

Also, Lockhart, like his CNN bosses clearly don’t comprehend what satire is. Perhaps they should spend some time reading the Babylon Bee to grasp the nuance of satire instead of going after them.

Even the Babylon Bee commented on Lockhart’s original post.

Leave the satire to us; we'll leave the fake news to you.

Joe also tweeted that he thought it was funny that his “joke” poked a bear.

Here’s the thing, Joe, it wasn’t a joke. You know how these things work. The original tweet gets attention — even WaPo’s “conservative blogger” Jennifer Rubin had promoted the tweet — and the correction gets ignored.

Seems like I poked the bear today. The purveyors of Pizzagate and the Seth Rich conspiracy are lecturing me on honesty. I told a joke, you guys are a destructive joke that is killing our democracy. Other than that, hope you’re enjoying the trial and have a nice evening

Shortly after his “relax” tweet, he tweeted out that disinformation is being sown by those who are outside of the leftwing Media(D) bubble. 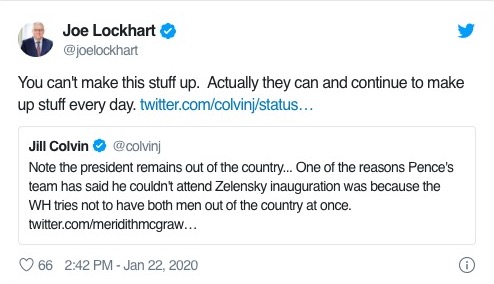 Not half an hour after he posts a fake conversation that he completely made up to push a narrative, he is railing against the Trump administration using a tweet by Associated Press White House reporter, Jill Colvin.

Finally, he made it clear that despite the excitement by Democrats, impeachment isn’t supposed to be a means of entertainment.

Someone ought to tell Rep. Adam Schiff(D-CA) that this isn’t a forum for melodramatic grandstanding with his political thriller screenplay.

Hell, someone should tell Joe Lockhart who posted a fictional conversation pretending that it was real and insisting that even though it isn’t “factually correct” it’s clearly “morally right.”