The only way that Iran can honestly be called ‘Trump’s Benghazi’ is that Suleimani was yet another one of Obama’s messes left behind for an actual COMPETENT president to deal with.

Remember those official remarks on the day after Benghazi?

“The United States condemns in the strongest terms this outrageous and shocking attack,” Obama said, while insisting it would not threaten relations with Libya’s new government. “… And make no mistake, we will work with the Libyan government to bring to justice the killers who attacked our people.” — Source: Reuters
[Emphasis added]

So… did Obama ever deliver on that promise?

I mean, he saw to it that some patsy YouTuber was arrested (on camera) in the middle of the night, and Susan Rice pushed that bogus narrative on all the Sunday shows. So Obama saw to it that it didn’t hurt his re-election chances.

But did Obama actually deliver on that promise of JUSTICE? Did he see to it that any heads rolled for what happened to those four Americans who were left to die? Nope. That was just another empty platitude just like his ‘hope and change’ or his ‘you can keep your doctor’.

So, whose head SHOULD have rolled? Do we know?

Sure we do. Back in 2014, a book came out that even named names. (And gee, wasn’t Obama still president back then?) Citing the book ‘Dark Forces’, the NYPost article reported this:

Suleymani has orchestrated attacks in everywhere from Lebanon to Thailand. The US Department of Justice accuses him of trying to hire a Mexican drug cartel to blow up the Saudi Ambassador to the United States while he was in Washington, DC.

My sources, meanwhile, say Suleymani was involved in an even more direct attack on the US — the killing of Ambassador Christopher Stevens in Benghazi, Libya.

“In Libya, Iran wanted to block US influence, which they saw as a threat,” the intelligence chief said. “They saw the uprising against Khadafy — and the Arab Spring more generally — as an opportunity to accomplish this.”

…Suleymani and his Quds Force operators were so successful at killing Americans in Iraq because they had penetrated US operations.

They didn’t just randomly place an IED on a roadside, Maguire said. They placed the IED where and when they knew an American convoy was going to pass.

The faked kidnapping in Benghazi was a typical Quds Force op. They used a local militia that on the surface detested Shias, just as they used the Taliban in Afghanistan and manipulated al Qaeda.

“They are very good at deception operations,” Maguire told me.

And our side didn’t have a clue. The CIA chief of base and his deputy fell for it hook, line and sinker.
Source: NYPost

Obama turned a blind eye to the threat in order to kiss Iranian ass.

Obama shut down Project Cassandra’s work to investigate and shut down Hezbollah. They looked the other way when this same guy organized a failed bombing attempt in Washington D.C..

That promise of ‘justice’ was never delivered. In fact, Obama was himself instrumental in SHIELDING Suleimani from justice.

Even with their attacks on international shipping and oil refineries in the Gulf, Trump showed restraint.

His reaction to a rocket attack that killed a US civilian was likewise measured, attacking the places those rockets came from.

Then they made the mistake of attacking an embassy, which, the last time we checked, was an act of war. 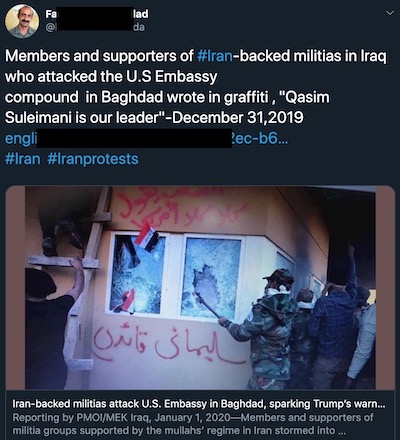 The media quivered in delighted expectation at the opportunity to pin the moniker ‘Trump’s Benghazi’ on the attacks against our embassy in Iraq. But Trump took swift and decisive action and stopped those attacks cold.

Then Trump ordered the drone strike that took out Suleimani.

.@realDonaldTrump is reaffirming the proven doctrine of Peace Through Strength. Iran was given multiple warnings & instead chose to continue to escalate tensions & threaten US troops & diplomats. The era of leading from behind with pallets of cash is over.

We close this with the same words we opened with.

The only way that Iran can honestly be called ‘Trump’s Benghazi’ was that Suleimani was yet another one of Obama’s messes that was left behind for an actual competent president to deal with.