The film’s original release date was canceled after the tragic mass shootings in El Paso, Dayton, and Gilroy.

The film was originally set for release on September 27, 2019, but after the three horrible mass shootings and outrage over the project, Universal Studios pulled the plug on the project with no expected release date. Even the trailer was scrubbed from the internet.

The film centers around 12 strangers from working-class and/or Southern communities who are referred to as “deplorables,” kidnapped and forced to partake in a gruesome battle royal organized by a group of “liberal elites.” But as the new trailer shows, the group in the film hatches a plant to fight back, launching a battle that blends over-the-top violence with political satire.

The original trailer showed the “elites” mocking the “deplorables” and it seemed to be in rather poor taste considering the backlash that Trump-supporters receive.

Some conservative pundits were disappointed that The Hunt was shelved. They said that the controversy over the movie was misplaced because the trailer shows a group of conservatives turning the tables and fighting back against their captors.

Even the President tweeted about it.

….to inflame and cause chaos. They create their own violence, and then try to blame others. They are the true Racists, and are very bad for our Country!

Universal Studios has used the earlier outrage to promote the movie for its March 13 release. 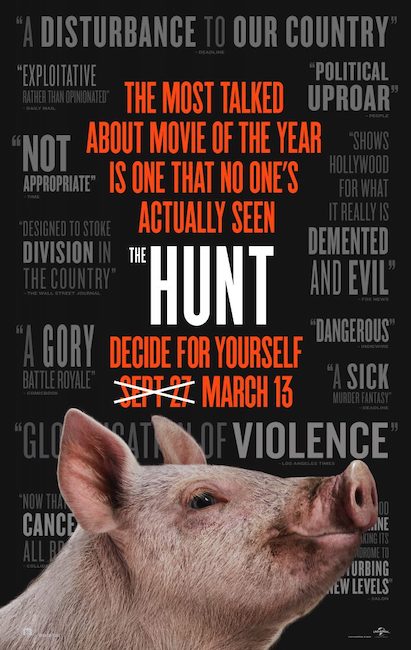 Blum said, “It’s probably the most judged movie that’s ever existed that everyone who judged it hadn’t seen. We weren’t going to win the conversation around that and so it was our decision, in holding hands with Universal, to take the movie off the schedule.”

Lindelof added, “For us there was just a fundamental frustration that nobody was talking about the movie. They were all talking about what their perception of the movie was — a perception that was largely formed based on all the events in the aftermath of the horrific weekend before. [But] we really don’t want to be pointing fingers, and more importantly, we don’t want to be wagging fingers at anyone for overreacting or reacting incorrectly. We just felt like the movie was being misunderstood.” He also said that his inspiration for the movie was Jordan Peele’s horror film, Get Out.

Those who saw the movie in a test screening just days after the shootings didn’t find the movie provocative or connect it to the recent tragedies.

In an exclusive interview with THR, Blum and screenwriter Damon Lindelof — who shares credit on The Hunt with Lindelof’s Watchmen collaborator Nick Cuse — defend the film as an over-the-top, satirical take on the divided state of the union that is even-handed in its sendup of the opposing factions. “None of us were interested in taking sides with this movie,” Blum says.

Directed by Craig Zobel, The Hunt casts Hilary Swank as the ringleader of a gang of wealthy snobs who try to wipe out a group of assorted individuals who have posted right-wing views online. Though the “elites” supply their prey with guns, the playing field is not level. But one woman, played by Betty Gilpin, turns the tables on the killers.

The new trailer puts a very different spin on the movie with the so-called “elites” looking just awful and the “deplorables” as the heroes pushing back against them.

Blum and Lindelof are hoping that the President tweets about the movie again.

Asked whether there was any pushback from Universal about the film’s intense violence coupled with its political themes, Blum says, “It was read as a satire, no different from The Joker or other movies that are violent,” he says. “It was read as a movie that didn’t take sides.” He analogized The Hunt with his successful The Purge franchise, saying, “The audience is smart enough to know that what they’re seeing is a satire and it’s preposterous.”

Says Lindelof: “We think that people who see it are going to enjoy it and this may be a way to shine a light on a very serious problem in the country, which is that we’re divided. And we think the movie may actually, ironically, bring people together.”