Many team sports have that one really tough-to-fill position, one that not everyone has learned to play. That fact gave one ordinary Joe a place in the record books.

Baseball has pitchers, football has quarterbacks. But finding a qualified hockey goalie is another animal entirely.

Obviously, you need the game knowledge and reflexes to stop a puck and the skating ability to make quick lateral movements to follow a play. But you also need the flexibility and athleticism to wear the cumbersome gear and transition from flopping around like a fish in a mad scramble to standing back up and squaring yourself for the next shot.

Even professionals who’ve played hockey their whole life don’t have the skill set it takes to jump between the pipes in an emergency.

That’s why there’s a backup goalie, in case the first guy gets hurt. But what if something happens to that BACKUP goalie?

The league has a contingency plan for that. In any given game, there will be someone on hand ‘just in case’ he needs to be called up in an emergency.

Normally, it’s not an issue. Most of the time, a back-up goalie is good enough to pick up the slack if someone has an ‘off’ night or gets hurt.

But every once in a while, something happens and this backup-backup gets his day in the sun.

Most nights, David Ayres shows up on game day to sit behind the wheel of the Zamboni and flood the ice between periods. 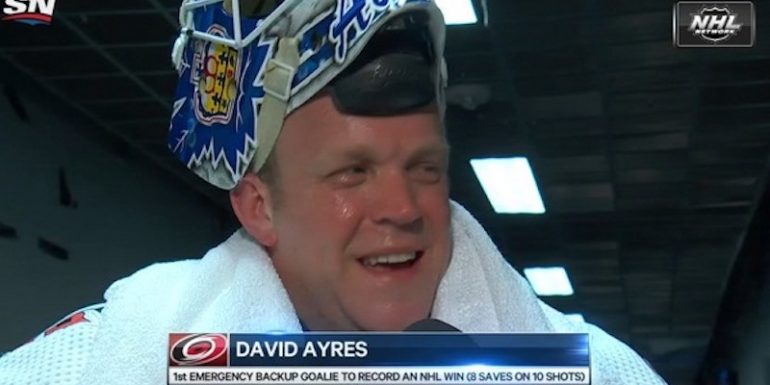 But Sat, Feb 22, was different. It was a night that David will tell his grandkids about.

The Carolina Hurricanes had to turn to 42-year-old emergency backup goalie Dave Ayres on Saturday against the Toronto Maple Leafs.

He not only held his own against one of the NHL’s most powerful offensive teams, he beat them.

Ayres, a Zamboni driver for the AHL’s Toronto Marlies and the emergency backup for both teams on Saturday night, was forced into action midway through the second period after Hurricanes goalies Petr Mrazek and James Reimer had to exit the game due to injury. He ended up stopping eight out of the 10 shots he faced — while also recording a shot on goal of his own — in a 6-3 Hurricanes win.

The fact that an emergency goalie had to enter the game is fascinating enough.

But that he played as well as he did, and managed to get credit for the win makes it one of the most stunning accomplishments in recent NHL memory.– Source: NBC

This isn’t just stepping on the ice for a minute and a half to close out a game. He was there in goal for fully half the game.

That’s amazing. The fact that an amateur faced down a team some of the league’s highest-scoring players made it even more amazing.

But the dude is 42 — the oldest guy to have ever been called upon for this role. It’s old for a skater, let alone a goalie who will need to react to 100mph slapshots, deflections, redirections, someone who would have to do the splits or make that sprawling save.

No emergency backup goalie (EBUG) had ever gotten credit for a win before… he was the first ever.

There’s something else about him you should know.

He’s had a kidney transplant.

The Hurricanes, known to work quick in these viral situations, announced they would start selling Ayres shirseys with proceeds benefiting a kidney foundation, something he wanted to ensure was part of the deal. Ayres had a kidney transplant in 2004 and his mom was the donor.

“If it wasn’t for my kidney transplant I wouldn’t have been able to do this right now,” said Ayres, who’s full-time job is maintenance operations manager at Mattamy Athletic Centre, which we once knew as Maple Leafs Gardens. “That was the one thing I wanted to do was to make sure there was a kidney foundation in and around Raleigh that we could do something for and hopefully reach somebody and give them step towards where they want to be after they have a transplant or a kidney disease.”

This is the start of a busy week for Ayres. After Monday’s media tour he’ll head to Raleigh where he’ll serve as the Hurricanes Siren Sounder before Tuesday’s game against the Stars. The city will also honor him by proclaiming it “David Ayres Day.” That comes on the heels of North Carolina governor Roy Cooper Tweeting he’s ready to make the netminder an honorary citizen of the state.

Oh, and the stick Ayres used is heading to the Hockey Hall of Fame. Pretty, pretty good weekend. –Source: NBC

He may not have made the big bucks that his unexpected teammates take in, but he pocketed a ‘mere’ $500 for one night’s work. But the stories he’ll be able to tell?

Those are, as the old commercial says, ‘priceless’.