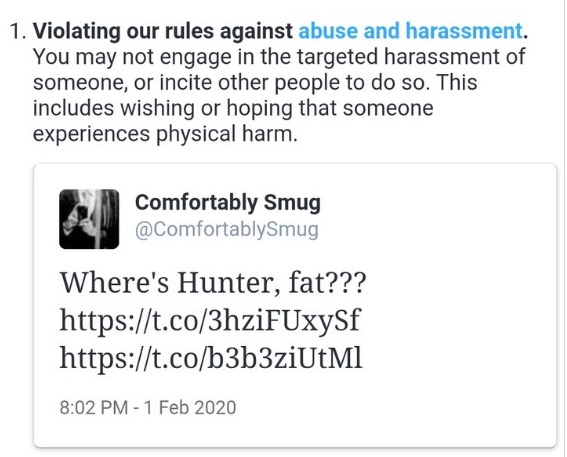 Is it the “Where’s Hunter” or the “fat” part that was the targeted harassment part of the tweet? The first is a legitimate question, and the second is precisely what Joe Biden did when confronted by a voter at a town hall event.

a bunch of Biden grandchildren in attendance at Waterloo event

One user also claims that the Smug tweeted included a meme of Baby Yoda holding a gun.

Since the tweet has been hidden due to violating the rules, we can only speculate what the image was. Perhaps like these:

baby yoda with a gun who will he shoot pic.twitter.com/Ld7aXElF6h

It seems that the Biden camp isn’t a fan of Smug or people in general, asking about Hunter. At least, that’s what @SmugIndustries is claiming.

Smh the Biden campaign got Smug locked up until the Iowa caucuses start tonight pic.twitter.com/POjfjCdDfy

Does Twitter think that the Baby Yoda with a gun is a threat?

This is pretty mild considering what people daring to share their right-leaning views have put up with on Twitter.

But hey, if they didn’t have double-standards, they wouldn’t have standards at all.

So, who exactly is Comfortably Smug? He’s apparently been doxxed online, but we’re not going to link that info here.

Here’s what you need to know — he’s a fan of Trump, and is an advocate of circling the wagons to protect Republican accomplishments, and is a big fan of “owning the libs.” He pushed the “Beto is a Furry” meme that circulated when Beto was in the race to be the Democratic Nominee. This was based on Beto’s stint in a band where he wore a sheep mask and a onesie onstage.

Smug, as the user is affectionately referred to by followers, has taken that fame and created a merch shop on TeeSpring called Smug Industries. There are shirts and mugs with memes on them including the call for his followers to act — “Minions Swarm”, the photo of President Trump in front of the fast-food meals served to the Clemson champions last year during the government shutdown captioned “Libs Owned Yet Again”, as well as an ugly Christmas sweater, and Beto O’Rourke’s tweet about taking away AR-15s with the caption, “FROM MY COLD DEAD HANDS, FURRY” and a Merrick Garland memorial mug.

That’s what makes what happened to Smug’s account so awful.

Frankly, Smug just has some hilarious tweets. He’s very good at “The Twitter.”

Donald J. Trump. First of His Name, King of the Americas and the First Men, Lord of the Fifty States, and Protector of the Realm. pic.twitter.com/UlVsKchpFv

Smug also says the things that many frustrated conservatives are thinking.

That's the funniest part, the Libs will never understand.

You can have millions march. You can protest and make signs.

But none of that matters, because the game stays the same, it's all about access.

The Smug account is pretty entertaining and influential in Republican/conservative and even libertarian Twitter circles. So much so, that he’s been noticed by some pretty high-profile folks in the Trump administration like… Don Jr.

And Smug definitely has some influence. Getting his “minions” to swarm has flipped polls.

In the next #TopMinion @ComfortablySmug poll win, we present a W over @cspan.

Lately, Smug has been holding a “Liberal Hack Tournament” that was actually covered by Fox News.

One of Twitter’s most famous anonymous political personalities has debuted an NCAA-style tournament dedicated to “liberal hacks,” pitting many members of the mainstream media against each other in a highly-anticipated contest.

Twitter user Comfortably Smug, who is widely known among conservative circles for his trolling of liberal public figures, unveiled the contenders for the first annual “Smug Industries Liberal Hack Tournament.”

“It will be a March Madness style [sic] bracket where I post matchups and everyone votes in the polls,” Comfortably Smug previously announced. “In the end, there will be only one Top Liberal Hack on Twitter.”

Fox News covered it again when it got down to the Final Four and hundreds of thousands of votes had been cast.

Twitter user Comfortably Smug, the unverified founder of the tournament whose identity has remained a mystery, unveiled the four remaining contenders of the viral competition after a 24-hour round of voting from the general public.

The ongoing contest has been pitting many members of the mainstream media against each other in an NCAA-style format, with only one who will be crowned the champion “liberal hack.”

It was a real nail-biter in the Round 4 with Jennifer Rubin vs Jim Acosta that ended in a tie resulting in sudden-death overtime.

THIS MATCH IS GOING TO A ONE HOUR SUDDEN DEATH OVERTIME

The most important vote this year. Show up, let your vote be heard at the first Annual Liberal Hack Tournament #HackMadness #TeamTater pic.twitter.com/uBEEMZXbRf

May the biggest #LiberalHack win!

With the #HacKMadness contest ending today, it’s an incredibly inconvenient time for Smug to go dark.

Especially in the midst of the final death throes of the impeachment circus and the Democrats’ Iowa caucus tonight.

Smug’s minions are now trying to get #FreeSmug trending on Twitter.

Other accounts with less reach have posted the same thing that Smug has with no consequence… yet.

Let’s see if Twitter will reverse this decision — but I’m thinking it’s unlikely.