There it is… leftist blames racism. Are you really surprised?

When any criticism is deemed racist, it diminishes what actual racism is.

New York Times Editorial Board member, Mara Gay, has decided to play the victim after she made a very embarrassing math error on The 11th Hour With Brian Willaims on MSNBC a few days ago.

On the segment, Gay mentioned a tweet that claimed that Mike Bloomberg could have given each American $1 million instead of spending an estimated $500 million on his bid to be the Democrat nominee.

Williams agreed with Gay and both marveled at the stunning tweet not realizing that the math was off by orders of magnitude. If you divide $500 million dollars by approximately 327 million, you get $1.50, not $1 million. Neither Gay nor Williams seemed to notice. Neither did the producers who prepared the tweet to show it on air.

As a refresher, here’s the MSNBC segment:

See if you can spot the math error. ?‍♂️ pic.twitter.com/V3b7pRqYUe

The Bernie campaign fell for it, too. 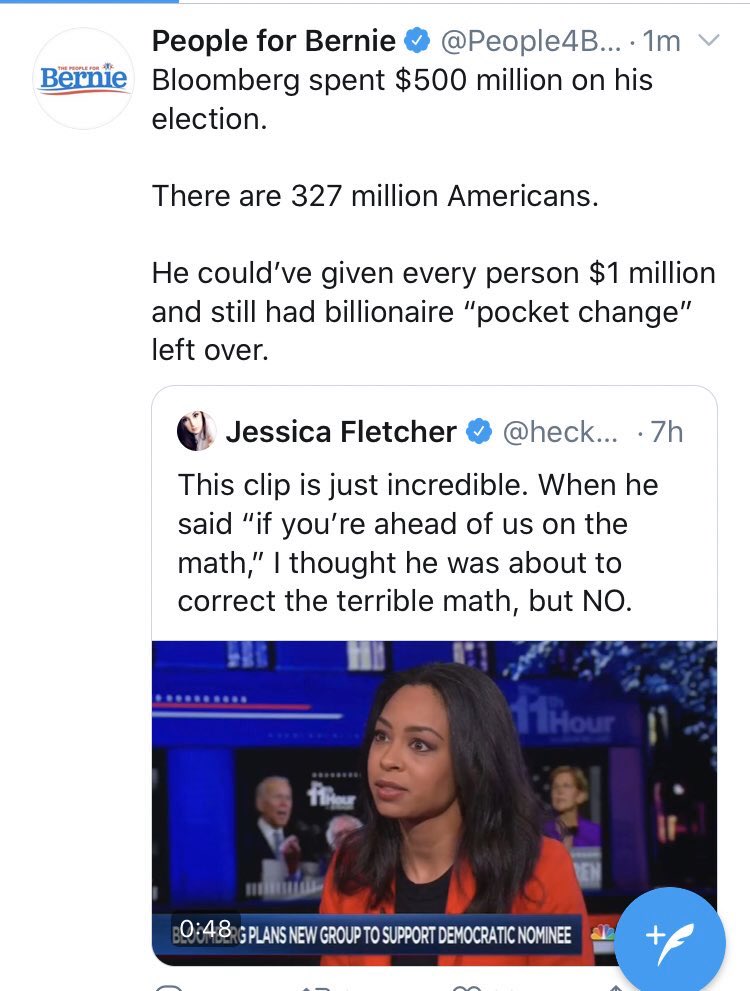 Are we really surprised that lefties who want The Rich™ to pay for every social program under the sun can’t do basic math?

These are the same people that don’t understand what “net worth” means. They think that Bloomberg swims around in his vault of gold like Scrooge McDuck.

To her credit, Gay was embarrassed by the error and sent out a tweet joking that she was heading out to buy a calculator.

In an era of everyone doubling-down and entrenching themselves in their own corner even when they’ve been proven wrong, it was rather refreshing.

After a few days passed, Gay wrote an op-ed and said that she was attacked by a “racist Twitter mob” over a “trivial math mistake.”

A racist Twitter mob came for me over a trivial math mistake. I'm not going anywhere. https://t.co/McxAT8P7OI

She writes that “right-wing trolls” and male journalists piled on her.

Across social media, right-wing trolls celebrated. And some journalists did, too. Most of them were men who are prolific on Twitter. (Going out and doing actual reporting? That’s harder.) The next time they make a mistake, I hope people are nicer to them than they were to me. “How did this end up on TV?” one of them helpfully wrote, sharing the video.

Unfortunately, quite a few Americans can tell you what it’s like to be the target of a Twitter mob over a gaffe. My great sin was trivial, harmless, silly. What’s it like when people are trying to cancel you for a math mistake? Weird, and maddening and painful.

Of course, in my case it wasn’t really about math, as anyone who read through my mentions on Twitter or saw my inbox would know.

She then cited a handful of racist as well as some just ignorant but not blatantly racist messages that she had received.

I am a black woman who writes for The New York Times and appears on national TV. And if you’re black in America, no matter who you are, what you accomplish or how hard you work, there will always be people to remind you that you are black, that you are “just a nigger.”

A colleague at The Times, an African-American woman, wrote to me on Friday afternoon, “They resent that you exist.”

This is precisely why the Media(D) is reporting lefty policies like Medicare for All and The Green New Deal as feasible — because they can’t do basic math. How can we trust them if they can’t even correctly report on the policies that are being debated?

And yes, there are horrible people on social media and Twitter does seem to bring out the absolute worst in people… BUT the vast majority of people who were mocking her (along with Brian Williams, the author of the tweet, Mekita Rivas, all of the producers who had the tweet ready for air, and the Bernie campaign,) for the inability to divide 500 million by 327 million.

Ian Miles Cheong who writes for Human Events and The Post Millennial noted that it isn’t just black people that are attacked because of their race.

My people are being beaten up in real life because of the coronavirus but you don't see me bitching about it. pic.twitter.com/oPbsHNREvG

Right-wing Twitter personality and podcaster, Neontaster put the criticism in perspective — Gay took a handful of awful tweets out of the tens of thousands that mocked her math skills and played the victim.

She tried to calculate how many racist tweets she got. Turns out it was 847 trillion.

Clearly, the problem here is that Mara Gay can’t seem to do basic math in her head when talking about how much Bloomberg spent on his campaign, and she plays the race card when she’s called out.

Mara Gay should try being a black conservative woman on Twitter sometime. I’m sure that Candace Owens and Antonia Okafor could enlighten her about what a great time that is.