All the gains made by a rare show of non-partisan solution-based talks between Democrats and Republicans in the Senate suddenly fell apart when Nancy and Chuck threw a wrench in the works.

A deal that neither side was happy with, but both sides could tolerate was cobbled together to get help out of the door and out to the people who really need it — to the people and businesses being jackhammered by the enforced work stoppage.

It’s not as though Democrats didn’t get some of their favorite objectives represented. Unemployment benefits have been sharply raised, for instance.

Ranking members from both parties worked together. They were ready to vote cloture so they could fast-track this process so that businesses will know if they can keep their employees despite the crisis, or if they need to start handing out pink slips.

Then Chuck and (for some reason) Nancy came into play and killed the bipartisan spirit. They took this opportunity to start playing political hardball.

The American people expect us to act. If we fail, it will be because Senate Democrats are continuing to dither while the country expects bold, bipartisan action. pic.twitter.com/23pFHoDtCl

Every Republican voted to end debate and move to a vote. And this right here…

Dumb question… who the hell thought getting @SpeakerPelosi involved would be a good idea? https://t.co/7NpkGEm0hK

… explains why every Democrat voted against it.

Democrats own this now https://t.co/rlrNYr5MJP

So much for a spirit of putting ‘nation before party’. Democrats think they can leverage a ‘win’ out of this somehow… 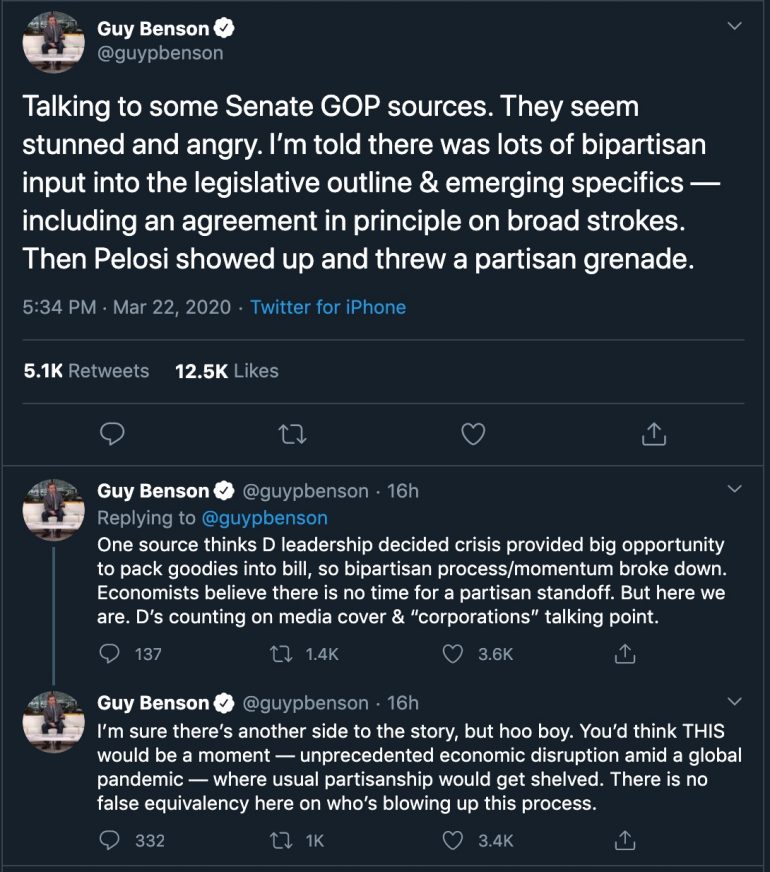 It wouldn’t be the first time that wealthy Democrats looked fondly at their hope of leveraging the pain of the ‘little guy’ as a way to wrest power back from Republican hands.

Or have we already forgotten about Bill Maher, safely tucked away with his millions, hoping for a recession that could undermine Trump’s credibility and throw the President out of office?