Of all the symbols available for all the parks, it had to be THIS being featured in 2020, eh? Of course it did.

The next time you pay cash somewhere, and get change, take a look at your quarters. You just might be getting a coin from the ‘America the Beautiful Quarters Program‘.

This program has been running since 2010, and features five national parks each year, with an image stamped on each coin to represent the corresponding park.

In past years, we’ve seen Yellowstone and the Grand Canyon, Gettysburg and Glacier National Park, Rushmore, the Everglades… on and on, 5 each year.

Nor are these parks taken exclusively from the lower 48. Puerto Rico was featured in 2012. DC is in there. Alaska, Hawaii, the US Virgin Islands, and this year features another five parks.

Four of this year’s featured coins are much as you might expect. One had an image on the coin whose coincidence beggars belief.

Vermont, Kansas, Connecticut, US Virgin Islands, and one other location were featured in coins released earlier this year. It was released February 3, to be precise. For context, Mini Mike Bloomberg was still looking to win big on SuperTuesday.

February 3rd is two days before the Impeachment acquittal. It was one day before the State Of The Union speech. On February 3rd, there were eleven confirmed cases of CCP Coronavirus in the US, and Fox ran a story updating us on the closure of air traffic to and from China.

“While the overall risk to the American public remains low, funneling all flights with passengers who have recently been in China is the most important and prudent step we can take at this time to decrease the strain on public health officials screening incoming travelers. These steps will also expedite the processing of U.S. citizens returning from China, and ensure resources are focused on the health and safety of the American people,” DHS Acting Secretary Chad F. Wolf said of the news.

“We realize this could provide added stress and prolong travel times for some individuals, however public health and security experts agree these measures are necessary to contain the virus and protect the American people,” Wolf continued. “To minimize disruptions, CBP [Customs and Border Protection] and air carriers are working to identify qualifying passengers before their scheduled flights. Once back in the U.S., it’s imperative that individuals honor self-quarantine directives to help protect the American public.” –Source: FoxNews

So what’s the big deal about the one released on February 3? The location it features, Western Soamoa, is ordinary enough. What’s weird is what is featured on that coin released in early February 2020.

Of all the things it could have featured, what was featured on it? 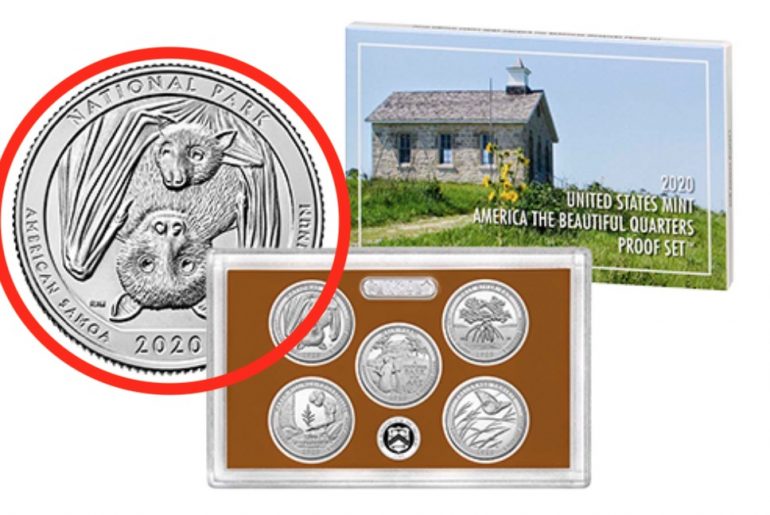 In the very beginning of a pandemic triggered by a bat-borne virus… we’re featuring the damned things on a coin.

Seriously, what are the odds?