George Floyd’s death has been politicized, but this is beyond vile.

Joe Biden, who is trying to repair his image with African American voters after his awful “you ain’t black” comment during an interview, is not letting the crisis of George Floyd’s death go to waste.

It was just yesterday that the former Vice President said that he wouldn’t “traffic in fear and division or fan the flames of hate” but that only lasted about 6 hours, apparently.

The presidency is a big job. Nobody will get everything right. I won’t either.

But I promise you this: I won’t traffic in fear and division or fan the flames of hate. I will seek to heal the racial wounds that have long plagued this country — not use them for political gain. pic.twitter.com/TfNaoMRZQp

Joe says that he’ll make mistakes. It certainly didn’t take long to make a whopper of a mistake.

His campaign sent out a fundraising email with a transcript of the address to the nation that Biden made regarding George Floyd’s death and the subsequent fallout that has affected the entire nation.

The subject line for the email was “I can’t breathe.”

It began just as his address did, with these words:

George Floyd’s last words. But they didn’t die with him. They’re still being heard. They’re echoing across this nation.

They speak to a nation where too often just the color of your skin puts your life at risk.

It’s fine for Biden to email his supporters, but at the end of it was a large, red “Donate to Elect Joe Biden” button at the bottom.

Just got a fundraising email from @JoeBiden, subject line "I can't breathe."

You can see the email here.

Here’s a screenshot of the donate button: 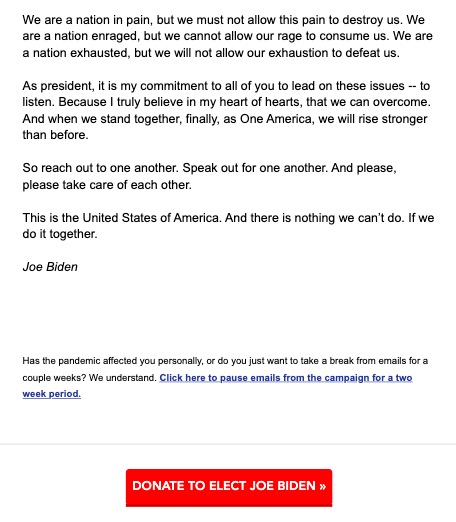 By the way, if you read through the email and/or listen to the entire address, Mr. I Won’t Traffic In Division pretty much attacks President Trump throughout the entire thing.

He slammed the President for:

You can watch Biden slurring through the full speech right here.

Biden can criticize the President as much as he likes, but we are free to criticize Biden.

Using George Floyd’s final words to fundraise is an absolutely disgusting thing to do.