Herman Cain’s rags-to-riches story is the quintessential tale of the American Dream. But rather than celebrate that, his death has become an occasion for partisan invective.

[Editor’s note: this piece is a little longer than many, but be sure to stick around for selections from the tribute his staffers give to him at the end.]

He lived a full and eventful life, starting from obscurity to ‘rocket’ ahead to enormous success. He has no shortage of accolades.

Carmichael told some of Cain’s life story — how his mother was a domestic worker and he overcame “absolute destitution” to become CEO of Godfather’s Pizza and chair a federal reserve bank. In addition to his career at Godfather’s, as well as his time on the political stage, Cain was a rocket scientist for the U.S. Department of the Navy. “Quite literally a rocket scientist,” she said.

He was this writer’s preferred contender in 2012 until the press ran with a rumor about his personal life that forced him to pull out of the race. We can’t help but notice these media personalities were many of the SAME people that turned a convenient blind eye to John Edward’s ongoing affair and bastard child during his campaign run.

We’ll never know if Herman Cain would have been able to unseat Obama, or if it would have put a final knife in the Democrat (and their media lackey) talking points that Republicans don’t like Black People. Judging by the way people are talking about him after his death, they would still have found some way to dismiss him as not ‘really’ black. Which is weird, considering his mother, as we have mentioned, was literally a ‘domestic worker’.

He beat Stage 4 colon cancer, but at 74, he wasn’t strong enough for the fight and succumbed to Coronavirus. He wasn’t worried about wearing a mask, and people made a big deal about him being present at the Tulsa rally. But chances are he contracted it sometime after that.

“We honestly have no idea where he contracted it,” Calabrese said. “I realized people will speculate about the Tulsa rally, but Herman did a lot of traveling the past week, including to Arizona, where cases are spiking. I don’t think there’s any way to trace this to the one specific contact that caused him to be infected. We’ll never know.” —Heavy

The left-versus-right political battle is often framed as good guys versus bad guys, with the media invariably putting the figurative white hat on the Left.

But let’s compare how we treat the passing of people across the aisle.

We only recently saw the death of Rep Lewis who — apart from his important role in Civil Rights history — is ALSO known for having been fiercely partisan. He hasn’t been shy about firing off personal attacks (whether justified and substantiated or not) about his political rivals.

Even so, upon his passing, we will note that almost every Elected official and Media personality on the Right reacted graciously to his passing.

Contrast that against the glee expressed by the so-called ‘good guys’ that a Republican has died, not just by no-name losers, but by the professional pundit class as well. And remember, these ghouls have spent the last few months lecturing us about the value of Black Lives. Apparently some black lives count more than others.

Here is one leftist ghoul hard at work demonstrating his superior virtue. 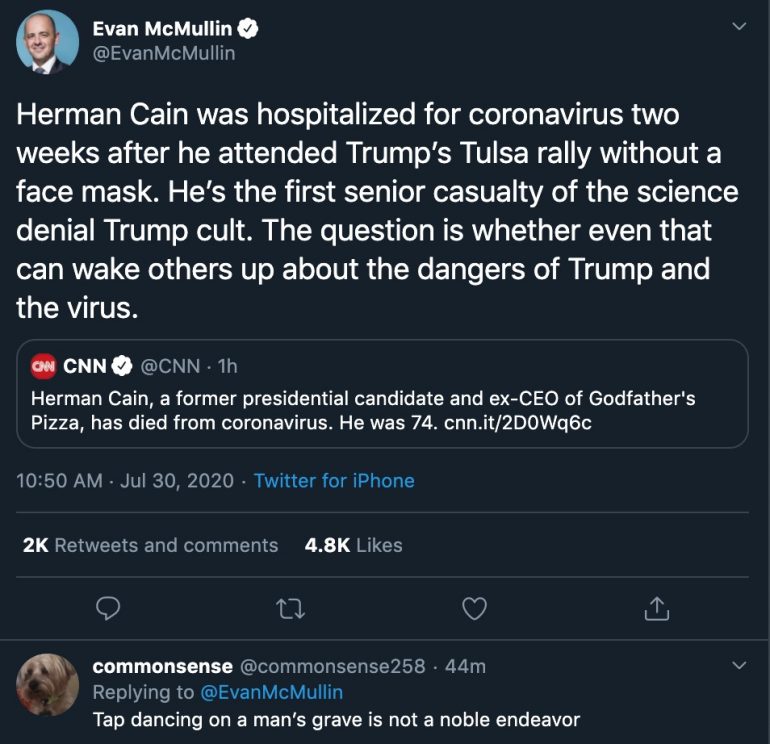 It’s not just us noticing this pattern.

The “when they go low, we go high” crowd is celebrating the death of Herman Cain. Good people.

Here is Anna Navarro, who the halfwits on the Left like to trot out as placeholder for offering a ‘Republican’ perspective.

For a supposed ‘Republican’ she sure does manage to march lockstep with each and every one of the CNN talking points. You might almost think she is for sale. 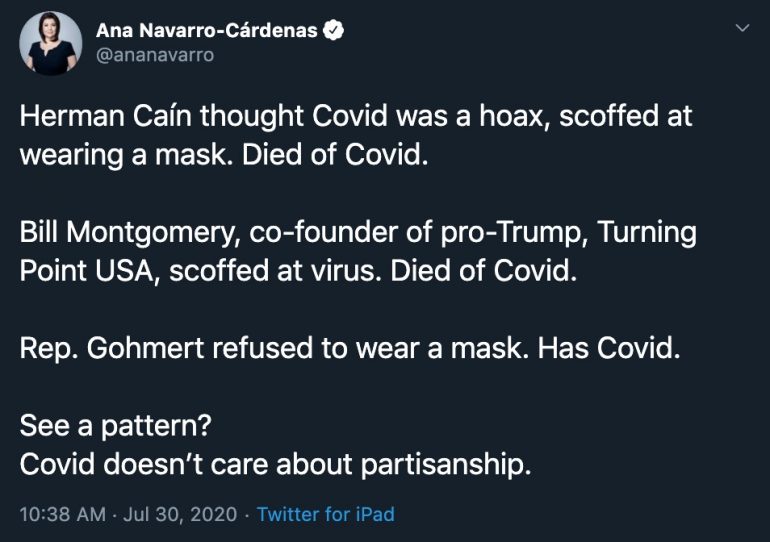 Here is a taste of the response. 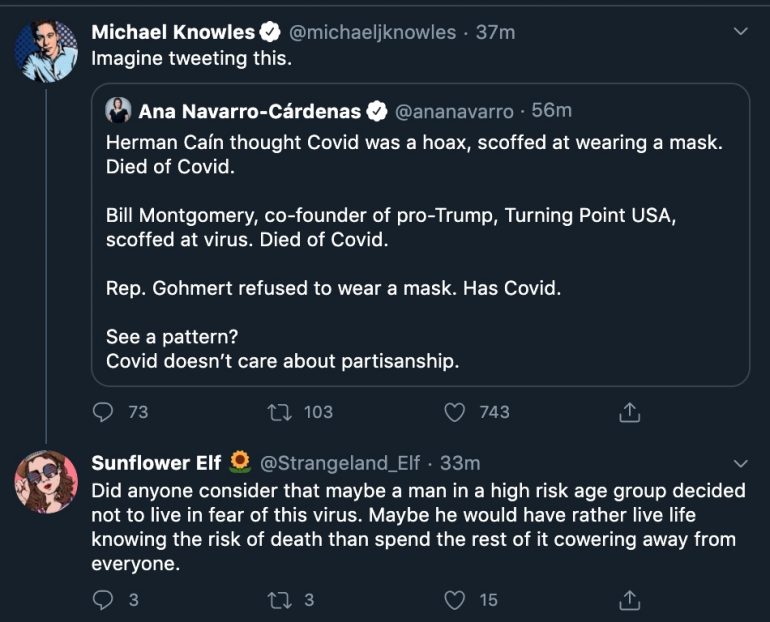 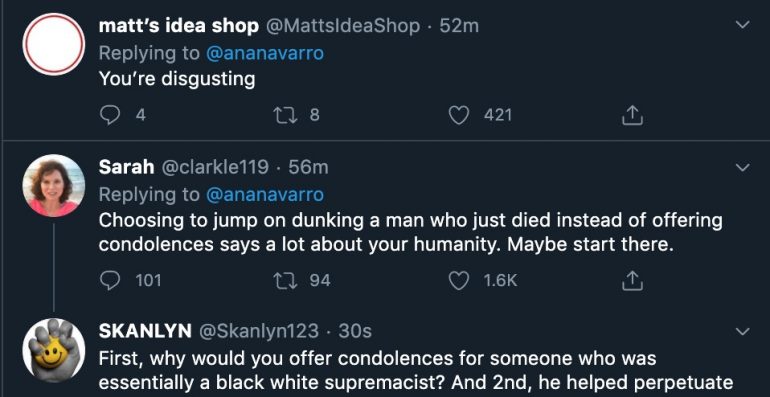 (This last guy went on to compare him to a suicide bomber, claiming he ‘actually sacrificed his life with the purpose of making even more people die’.)

The fact that Tulsa Rally is trending (ie leftists making political hay out of Herman Cain's death) and Herman Cain is not trending tells you everything you need about leftism. It's a soul-destroying philosophical plague.

We’ll leave the last word for those from his own website, who knew him better than his critics.

Herman Cain – our boss, our friend, like a father to so many of us – has passed away. He’s entering the presence of the Savior he’s served as an associate minister at Antioch Baptist Church in Atlanta for, and preparing for his reward.

Romans 2:6-7 says: “God ‘will repay each person according to what they have done.’ To those who by persistence in doing good seek glory, honor and immortality, he will give eternal life.” By that measure, we expect the boss is in for some kind of welcome, because all of us who knew him  are well aware of how much good he did.

I haven’t even gotten into his experiences as what he called an ABC – an American Black Conservative – because his politics seems so low on the list of things I want to tell you about him right now. He was one of the most important figures to ever come into my life, and I can’t wrap my head, or my heart, around the fact that he’s gone. I don’t think I’ll be able to for a long time.

But I want you to understand just what our world has lost today. There aren’t many people like Herman Cain, and it behooves us to truly cherish the ones we’re given. His wife Gloria – his children Melanie and Vincent – and his grandchildren . . . they need our love, our support and our prayers. Nothing I talked about above meant as much to him as these wonderful people did, and because he loved them so much, we will continue to feel his impact on the world through them.

I’m sorry I had to bring you bad news this morning. But the good news is that we had a man so good, so solid, so full of love and faith . . . that his death hits us this hard. Thank God for a man like that.

Rest well in His presence, Boss. We love you. [Read the full tribute HERE]