Remember when Bill Maher said a Recession would be ‘good’ so long as it threw Trump out of office? Are Chuck and Nancy exploiting the pain of ordinary Americans to their own advantage?

Roll back the clock a little less than two years. We all remember the extreme panic uttered by everyone on the left — whether elected or working in the media — when the shutdown was affecting GOVERNMENT workers.

Every second that passed of the shutdown (despite it being orchestrated by Schumer so that the budget could be stalled until Pelosi was in control of the House) was an enormous catastrophe. Because those were GOVERNMENT employees. And Democrats didn’t want to inconvenience their own.

But these shutdowns don’t impact Government Employees. Just the (formerly) working stiffs in the rest of America. Letting THEM twist actually helps their cause.

Which brings us up to the stalled COVID talks.

Then benefits expired for millions of struggling Americans.

Perhaps we mistook them for somebody who gives a damn? pic.twitter.com/pR9NYiCbd5

First, here are a couple of photos of Chuck and Nancy looking less than somber on their way to a press conference on Thursday describing how the latest round COVID bailout talks are unlikely to be resolved before the next deadline.

Schumer is pumping his fists in glee: 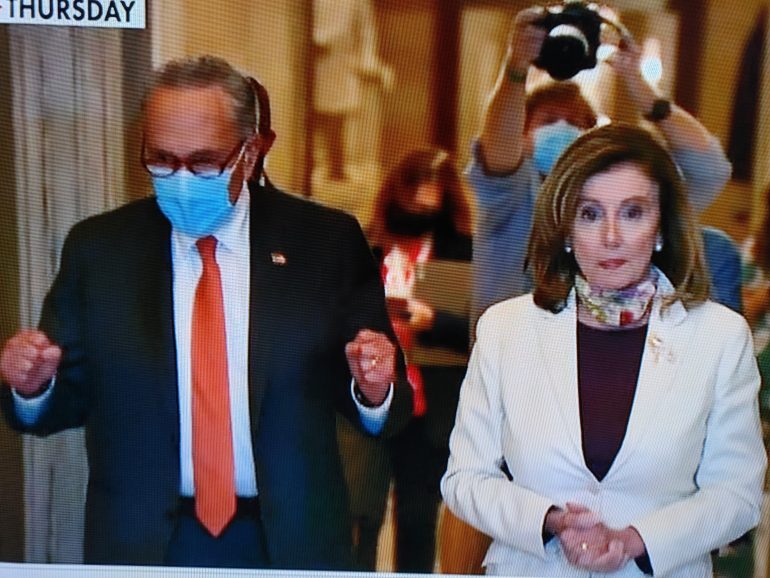 And if Pelosi’s grin was any wider her dentures would have fallen out. 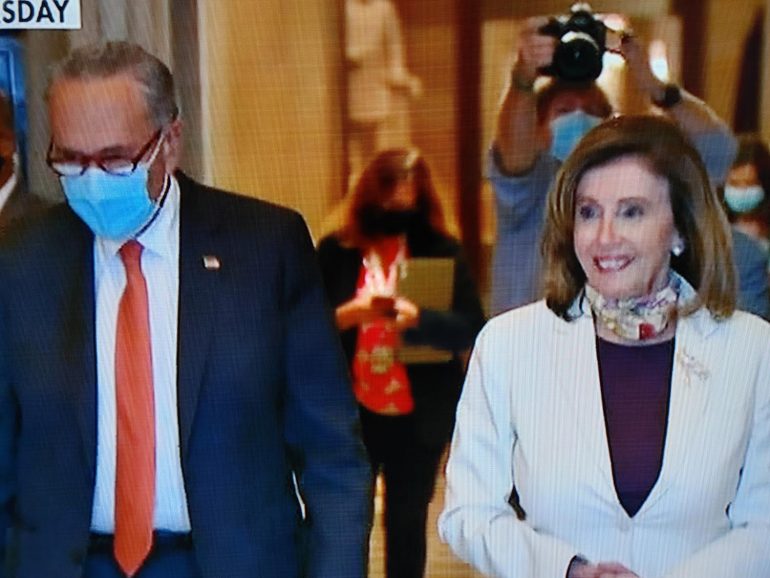 They seem far more interested in what this means for November 2020 than they do about what it means for some shopkeeper in Wisconsin.

Pelosi even tipped her hand about COVID being explicitly political when she called out PBS reporter Judy Woodruff for asking a tough question.

There's an expectation among Democrat party leaders (created by the media) that the media will never ask them any question that could potentially hold them accountable for anything.

What is Pelosi tacitly admitting here?

First, she is admitting that asking questions that might show weaknesses in the Democrat narrative is being ‘an advocate’ for the Republicans.

Second, her default expectation is that every media person is supposed to be ‘an advocate’ for the Democrats.

In lieu of any movement on the part of the ‘Resistance’ Democrats, Trump may take an Executive action on his own.