These ‘protesters’ causing so much trouble in Portland in the name of BLM sure do seem to have some strange priorities, that have exactly NOTHING to do with George Floyd, don’t they?

Back in the Civil Rights era, NON-violent protesters were led by an ordained Baptist minister whose memory is celebrated with a national holiday. Their goal was to live as equals among other Americans in a nation that embraced everyone equally.

Today, punks in their twenties are hellbent on burning the system down and replacing it with..? Well, they’ll figure that out as the go. Something better, they hope.

Because THAT idea has never been tried before and gone horribly, horribly wrong, has it?

Now in the name of… whatever they pretend to be *ahem*, ‘peacefully protesting’ for, they have crossed a new line.

They are burning Bibles.

We have all seen this movie before, haven’t we?

I don’t know what burning the Bible has to do with protesting against police brutality.

Do not be under the illusion that these protests and riots are anything but an attempt to dismantle all of Western Civilization and upend centuries of tradition and freedom of religion.

Hate to break it to you, guys. But book burnings are NOT a good look. Maybe you should stop and consider what you morons look like to the rest of us. 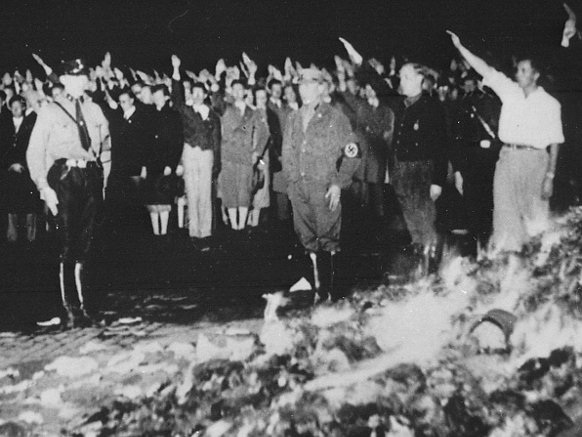 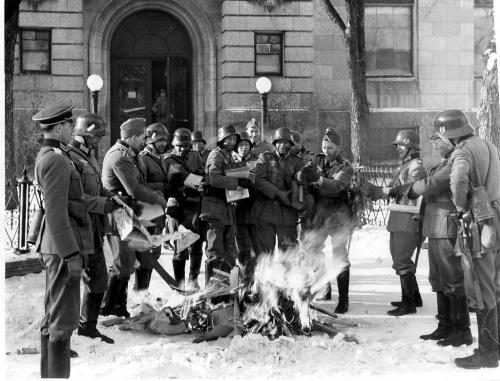 From the US Holocaust Memorial Museum:

Beginning on May 10, 1933, Nazi-dominated student groups carried out public burnings of books they claimed were “un-German.” The book burnings took place in 34 university towns and cities. Works of prominent Jewish, liberal, and leftist writers ended up in the bonfires. The book burnings stood as a powerful symbol of Nazi intolerance and censorship.

Book burning has a long and dark history.

Book burning refers to the ritual destruction by fire of books or other written materials. Usually carried out in a public context, the burning of books represents an element of censorship and usually proceeds from a cultural, religious, or political opposition to the materials in question.

The burning of books under the Nazi regime on May 10, 1933, is perhaps the most famous book burning in history.

…On April 6, 1933, the Nazi German Student Association’s Main Office for Press and Propaganda proclaimed a nationwide “Action against the Un-German Spirit,” to climax in a literary purge or “cleansing” (Säuberung) by fire. Local chapters were to supply the press with releases and commissioned articles, offer blacklists of “un-German” authors, sponsor well-known Nazi figures to speak at public gatherings, and negotiate for radio broadcast time. –Holocaust Museum

If you read the whole article, you will note who was burning those German books: ‘middle-class, secular student organizations’. The more things change, the more they stay the same, right?

Now we move to the book burning phase. I’m pretty sure ANTIFA doesn’t actually stand for what they say it stands for. Maybe just remove the anti part of them name and it’s perfect. https://t.co/LbjAANy3K5

The book burnings in 20th Century Germany that Goebbels helped orchestrate had quite a cast of characters that would seem all-too-familiar even today.

And they were burning books TOO?

It’s curious how these ‘anti-fascists’ bear so deep a resemblance to the group they claim to oppose, isn’t it?

We leave you with a question to see just HOW committed these folks are to their so-called cause.

There are — as I write this — places in this world where people are STILL bought and sold into slavery in marketplaces.

They are not bought and sold under any WESTERN or CHRISTIAN set of values, but according to the precepts of another major monotheistic religion.

The one the Left dare not criticize at any time for any thing.

Do these ‘stunning and brave’ book burners who need not fear any repercussions from offended Christians be similarly bold in their burning of a book under whose blessing slavery continues to be practiced to this very day?

Or is slavery — including the slavery of Black African victims — not really such a big concern to them?