Universities continue to pander to the wokescolds. Why are the Ivy League schools so often the first ones to cave to the absolutely ridiculous demands?

Cornell University’s English Department faculty members held a vote at the beginning of the fall semester to change the name of the department because they were concerned that it might be confused with English as a nationality.

Yes, I know you think that I’m making that up because it’s a completely absurd position, but it’s true.

From The Cornell Daily Sun:

During the English department’s first faculty meeting of the fall semester, faculty members of color introduced a proposal — to change the department’s name.

The new proposed name — “the department of literatures in English” — would mark a distinct change in the department’s branding, helping to eliminate what Director of Undergraduate Studies Prof. Kate McCullough, English, said was the “conflation of English as a language and English as a nationality.”

Earlier this month, a significant majority of the department approved the change, and is now awaiting approval from college administration.

They’re going to call it the “department of literatures in English”?!

And what’s with the pluralization of “literature” — which is already be used as plural to refer to a collection of works?

You can’t see this on the published version, but as I write this, my word processor is highlighting the word “literatures” as a spelling error.

Perhaps the English Department at Cornell should be concerned with other issues, eh?

Oh, I know… they’re meaning to apply the term “literatures” to many collections of works written in the English language, but it’s still clumsy and dumb.

Part of the push is that there is a move to include a larger body of work considered English literature so that it doesn’t just focus on the brilliance and unique contributions made by “white men” who wrote what have been considered — sometimes for centuries — as “classics.”

Shakespeare is not amused. 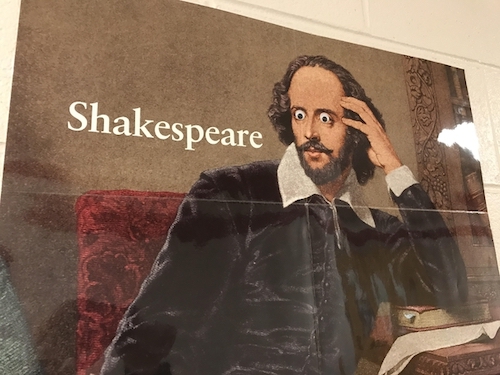 Hey, geniuses over at Cornell — it’s stupid to change the name of your department because I’m pretty sure that you’re still going to have a German, Spanish, and French departments, right?

But, they’re probably going to do it anyway because the demand came as “part of a conversation” on “systemic racism” and a “resurgence of the Black Lives Matter movement.”

The decision to demand such a change was spurred by this summer’s resurgence of the Black Lives Matter movement following George Floyd’s death, according to Prof. Carole Boyce-Davies, English, one of the original proposal writers. As a result, the faculty felt a sense of obligation to react in their own department.

“Faculty around the country — not just faculty of color, but faculty in general — began to look at the institution to see how we can help advance a discourse that challenges structural forms of racism which get reproduced in students and in teaching over and over again,” Boyce-Davies said.

Other faculty simply recognized that it was time that the department’s title represented what it was really focused on: literature written in English.

No, nobody but the “academics” thought that.

The article goes on to state:

“What surprised us was the fact that so many of the white faculty of the English department signed on — we were amazed,” Boyce-Davies said. “By the time we were ready to officially take it to the department as a whole, we had over 75 percent of the faculty signed on.”

Really? Universities have shamed white libs into accepting that they are implicitly biased and in order to not be racist, they must admit that they are racist and then “do the work” (ie. agree with “anti-racism” activist grifters) in order to end “systemic racism” which seems to be defined as literally anything that hurts the feelings of someone who is not white (See: Microagressions), and these activists are surprised that these cowed and broken white profs signed on en masse?

Lateral thinking must not be a forte at Cornell’s “Department of Literatures in English.”

Smaller discussions about anti-racist changes have been happening for years, according to Levine, but current circumstances gave the faculty confidence to take concrete, unified action.

“I think leadership matters,” [Department Chair, Prof. Caroline] Levine said of her stance. “This isn’t just us doing a symbolic gesture, this is in keeping with the University’s call to have us really rethink our everyday practices around racism.”

This is so silly.

I don’t know about you, but with all of this nonsense going on in “institutions of higher learning,” I’m encouraging my kids to go into the trades.

Do you really want your kids to spend 3 to 8 years of their lives getting “educated” by this bunch of knuckleheads?

Why Couldn’t Congress’ Private Police Force Of 2,000 Protect It From A Mob Of Hundreds?
January 15th, 2021 Sons of Liberty Media

Twitter Criticizes Uganda For Censorship While They Censor Conservatives in US
January 14th, 2021 The Real Side With Joe Messina