Biden dismisses Antifa as merely an idea. Democrats refuse to acknowledge that there is a problem with violence on the left… will they denounce THIS message?

The left has a saying that they love to use in attacking the right. ‘When someone tells you who they are, believe them.’

Their use of the expression often takes innocuous quotes loads on layers of subjective meaning (what they are REALLY saying here…) and then tell us that it’s ‘proof positive’ of Republicans being the bad people (guilty of wrong think ‘x’).

They solemnly tell us that those of us on the Constitutionalist Right are also always just an eyelash away from becoming a violent right-wing extremist militia, and that what Trump says, or what he doesn’t denounce, the fuel on which such nebulous and dangerous groups feed.

But when we find Democrats openly embracing violence and even murder to achieve political ends (two Republican protesters have been murdered in cold blood this summer by activists, and Scalise was one of several Republicans whose lives an attempt were made upon

Project Veritas is at it again.

When Bernie Bro campaign organizers spoke candidly about their willingness to embrace violence, kill Republicans, drag moderates into the streets, and send their rivals off to the gulags, nobody took them seriously.

That was BEFORE American cities started burning. The press STILL isn’t taking them seriously.

The radicals spoiling for a revolution haven’t gone away. If anything there seems to be more of them or at least more that will say who they are openly.

BREAKING: Denver area @coloradodems exec committee and @OurRevolution chair @Kyoti00 “2020 is a political revolution”; “Want to change this country,with violence…there’s only one way to do it.”; "Guillotines mother f**ker"; “Killing random Nazis in the street”#ArmedRevolution pic.twitter.com/QnmqHdrJ8o

The guy in this video is (was?) part of the Colorado Dems Executive committee. 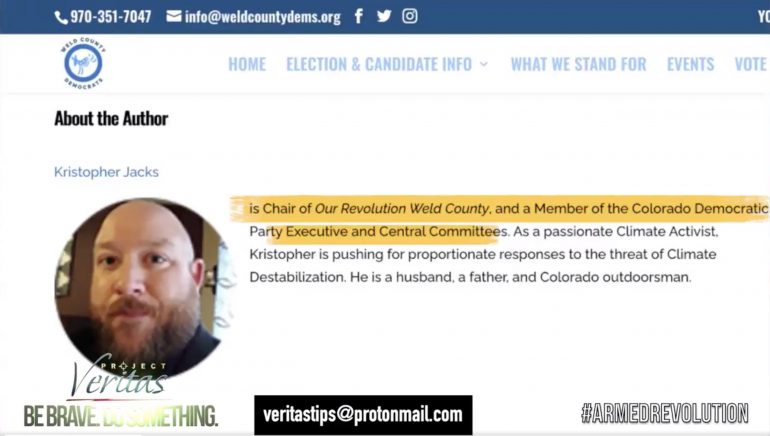 His name is Kristopher Jacks. He is the chair of ‘Our Revolution’, and for him, revolution is no mere metaphor. He’s an honest-to-God ends-justify-the-means sociopath. And he claims that he isn’t alone.

How far is he willing to go?

Here are a few of his own words:

“You gotta get people that are close to billionaires and start just random billionaires start turning up dead.”

Honest elections ARE the pressure release valve, the regularly-scheduled ‘political uprising’ where the voice of the people are heard. But this group is more interested in achieving power, and — like so many violent revolutionaries before them — believe themselves to be better than the public at deciding which direction the country should be taking.

“I do think there needs to be a militant group, and I love Antifa for that reason.”

“But unions ain’t stabbing motherf****rs like they used to.” (laughs) “They don’t have to though, because they used to stab people, see?”

“Option A, what I’m proposing. Option B, Slicy Bois. What are your choices?”

“Joe Biden is presumably left-leaning and he has a functioning signing hand. As long as there is progressive legislation that comes across his desk, I am confident we can occupy his house. We know where he’ll (Joe Biden) will live. And yeah, if he wants to veto medicare for all let him veto it. He’s never leaving that house again without protests.”

If the Democrats think these people are their friends, they’ve got a nasty surprise in their future.

“Half of the struggle I have ain’t with Republicans. It isn’t with the right-wing. It’s with f***ing moderates in the Democratic Party.

“They underestimate how many people on the Left are organized, trained, armed, and ready to go.”

This was someone in a leadership position within the Democrat Party.

If violence and killing is ok with this guy if it gets his guy across the finish line, do you really think he’d have any objection to facilitating election fraud or intimdation?

The Blood On The Hands Of Propagandist And Warmonger Colin Powell
October 21st, 2021 Sons of Liberty Media