The New York Times have long since switched gears from journalists to activists. They have an agenda and they are doing their best to drive it forward.

The traditional rules and ethics of journalism hold no power over such people.

For example: a real news outlet would wait for the people to choose an electoral outcome, and would describe that outcome to their readers, listeners, or viewers.

The New York Times, on the other hand, works backward from a desired outcome. This means that their stories must be chosen to favor a particular view of any given candidate, and that their omissions protect candidates they favor with a cloak of darkness — the very darkness in which (as the slogan goes) Democracy Dies.

Along the way they forgot they are supposed to REPORT the news, rather than become it.

Here’s an example of what can happen when you forget that distinction. 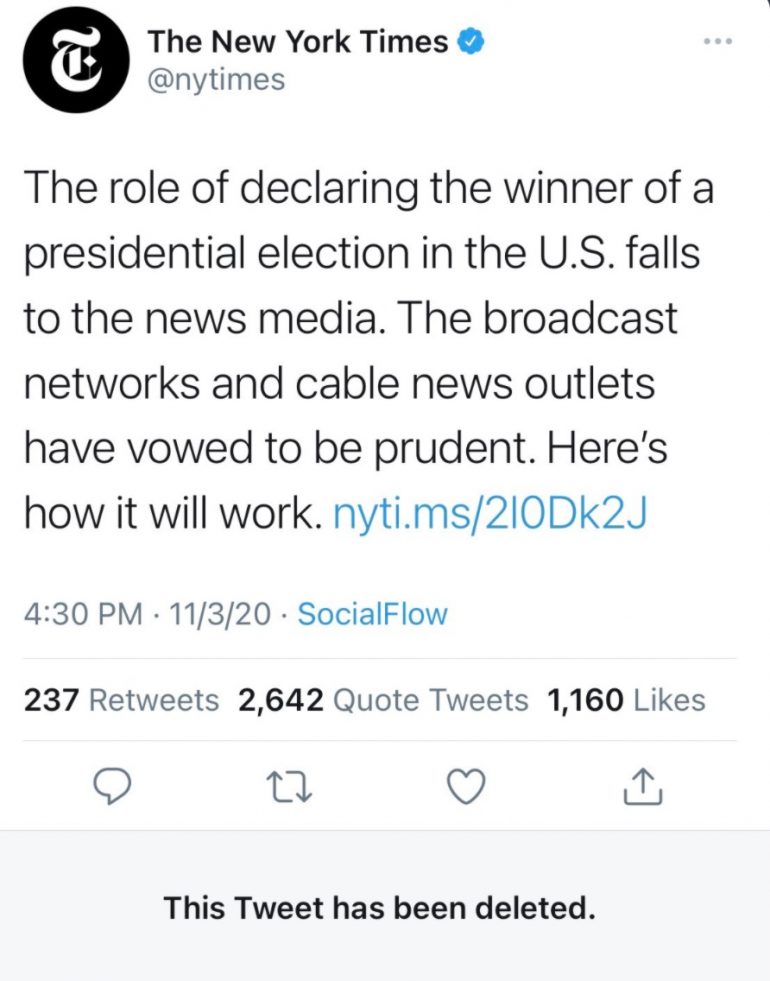 They’ve kind of taken that role on themselves as the delivery-system used by the government officials to get word out to the public.

They’ve created elaborate election tracker programs, decision desks and so on to turn election night into an event and a ratings bonanza.

They use it to create drama.

Different news agencies jockey to be the ‘first’ to declare a State’s results while trying to make the fatal misstep that CNN did when declaring for Al Gore.

But that isn’t how a winner is decided in the real world.

It is decided when the final tally is officially confirmed and signed off by someone with the authority to do so.

This is why the media ‘outrage’ over Trump extrapolating the existing polls to suggest he was the winner is so ridiculous.

Trump doing so relies on precisely the same ability to reason and make educated guesses that the press has been using to call elections for certain states or officials long before the last vote has been counted.

Trump declaring he was going to win is ‘bad’.

Of course it was. Hillary gave away the plan: do NOT concede a Trump victory. They said they would fight a second Trump term ‘by any means necessary’.

Keep counting until you win, they said.

Interesting how that fits in so neatly with this…

If you spot fraud, folks, do your thing and make it public.