***UPDATE***
EDITOR’s Note: It has come to our attention that the man making this threat is indeed affiliated with Antifa, but has been more of an instigator/troll than an actual movement leader.

That said, it’s still a good idea to keep your head on a swivel. We’re not out of the woods yet.

Remember how we were all gearing up for Leftist protesters to raise unholy hell in our cities if Biden didn’t get a victory? Well, their ‘victory party’ has ended and they’re getting impatient for official results.

Their message: give them what they want. Or else.

Nice Republican neighborhood you’ve got there. Pity if something should happen to it, eh?

This is nothing less than domestic terrorism, and it’s time we treat it as such.

This is not merely ‘protesting’. This is escalation. 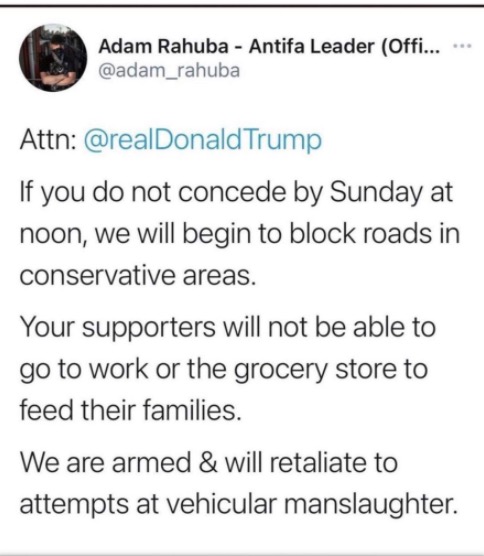 The political process is playing out exactly as provisions in the Constitution have stated. Contested results are being heard before the courts. Recounts are happening. Electors are being selected. Even if nobody could reach 270, there are other mechanisms to decide a winner in time for that key date toward the end of January.

But Antifa isn’t interested in playing by the rules. They know what they want, and by whatever unholy name they swear by, they will throw their fit to make somebody give it to them.

Good parents will understand that when you reward such behavior, you get more of it, and certain cities and states have gotten REALLY good at rewarding this behavior. They have rich benefactors paying bail to spring them out the same night. Meaning, no consequences for bad behavior.

They have complicit prosecutors downgrading their charges – if any are given at all.

They have gutless politicians refusing to denounce them by name, or thinking they benefit from their jackboot behavior, which encourages them further.

And do you really think it’s lost on any of them that the 44th President launched his presidential campaign in the living room of an unrepentant member — and co-founder! — of the Weather Underground?

Speaking of Bill Ayers, is it my imagination, or does he seem wistful as he suggests a second civil war may have already begun?

As violent and destructive antifa and Black Lives Matter riots continue to ravage American cities like Portland and Kenosha, a self-described communist who plotted to blow up the U.S. Capitol in the 1970s suggested that America’s second Civil War has already started.

“Am I the only one, or do you feel eerily that we’re living in Kansas, 1859, and that tensions are boiling over, but only years later will people say, ‘Yes, the Civil War began there and then?’” Ayers posted on Facebook. He posted the same statement on his website, BillAyers.org.

These clowns have ZERO respect for our institutions and want to see them come crashing down. They are just as happy (or perhaps even more so) to do so through violent means as they would through simple intimidation and the corruption of institutions.

If they do, in fact, launch this action and our authorities do not treat this as domestic terrorism (strictly speaking they are using both fear and force to push a political agenda) it could go very, very wrong indeed.

Time to denounce them by name, Joe. Or do you, in your heart of hearts, consider these jackboot thugs ‘very fine people’?