Media Hacks have already bragged that their cone of silence on the Hunter Biden story helped Sleepy Joe’s cause. Now that same conspiracy of silence is at work protecting a Democrat senatorial candidate.

Remember all the way back to the beginning of June, where Trump stood in front of a historical church that had just been firebombed by an angry mob? Suddenly, every journalist was a double-major epidemiologist and theologian. Everybody and their dog weighed in on why Christians should be thoroughly appalled at Trump’s visit to that site.

But now? Now we have a political Marxist running for Senate who is cut from the same cloth as Jeremiah Wright — about whom that same media was similarly silent — or, say Jesse Jackson and Al Sharpton. These are the racial issues equivalent of ambulance-chasing lawyers and would be considered by many to have hijacked authentic Christian belief and used it as a fig leaf for an explicitly secular and political agenda.

With the recently-resurfaced incendiary statements about military service, the media’s silence is deafening.

Warnock used the famous verse ‘No man can serve two masters’ to make a point that Jesus’ own words were not making.

Warnock used verses explaining one’s personal priorities and relationship with God and misapplied them more broadly to countries. A very predictable mistake for a collectivist to make, actually.

When explicitly given a chance to condemn military service under the expansionist, slave-taking, Pagan, bellicose Rome, what answer did John the Baptist — in the middle of a conversation about repentance, mind you — give to the crowd asking about what that meant for military service? (Luke 3) The short version is: “Do not extort money from anyone by threats or by false accusation, and be content with your wages.”

So, there is nothing inherently evil about military service in the New Testament context. Jesus backed John up by saying in Luke 7 that nobody ever born had been greater than John.

Laying aside the theological hackery with which the Marxist Warnock has twisted scripture to his own ends, how has his denunciation of military service played out with others?

A lot of folks are pretty offended by it. 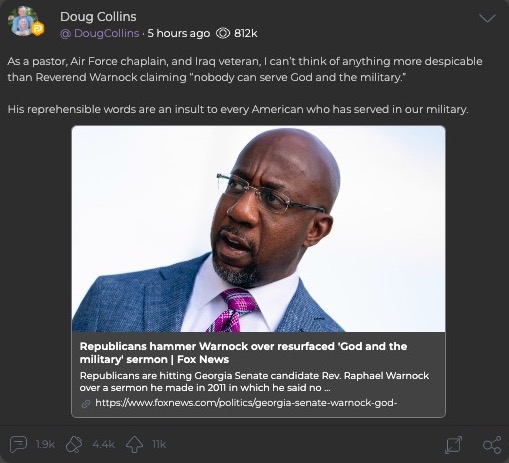 West said, “My father told me when I was 15 years old that there is no greater honor than to wear the uniform of the United States of America. He challenged me to be the first officer in our family.” Warnock doesn’t deserve to be a Senator if that’s how he thinks.

That seems about right.

And where is the leftist media for all of this?

The silence from the Media (Democrat) is deafening precisely because they ARE the darkness in which democracy dies.