If we’re supposed to trust the numbers, what are the numbers REALLY telling us?

There is a certain elegance to mathematics.

It’s one we know through centuries of experience with disciplines like accounting.

When done correctly, all the numbers will reconcile. When the numbers don’t zero out the way they are supposed to, it’s objective evidence of either a mistake or malfeasance.

That’s how forensic accounting can catch even sophisticated fraud schemes.

And an observant critic is pointing to yet another instance where the numbers don’t seem to reconcile correctly. 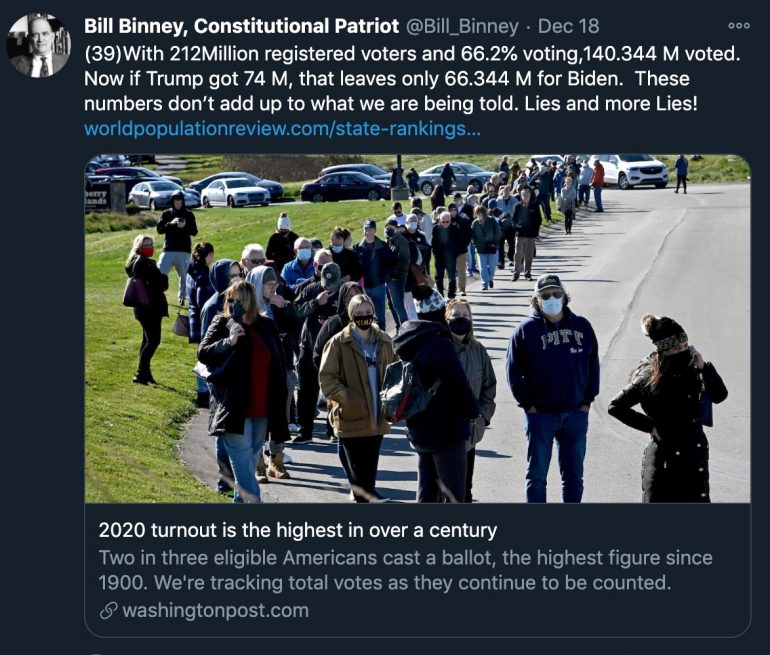 Gateway Pundit’s Joe Hoft took that further. He tallied up the up-to-date number of registered voters by state (putting them into a chart which showed his work) coming to a total of 213.8 Million registered voters.

This year’s turnout was 66.2% of all eligible voters… the highest percentage in over 100 years, at least. That number raises some red flags, but we’ll use it as a baseline for what follows.

That’s where the math breaks down.

Nobody out there has suggested that Trump’s numbers have been inflated, right?

So — by simple accounting principles — taking Trump’s total from the overall vote total should get us somewhere close to the total vote count Biden took in, right?

Any discrepancy would raise questions that should require a straightforward and reasonable answer, right?

When you take Trump’s 74 million away from the 141.5 who voted on election day (namely, 66.2% of the total eligible voter count) that should come somewhere close to that alleged record-setting Presidential election vote. Right?

But it falls short.

By this math, Biden should have 67.5 million votes, which nets us 13 million fewer than the record-setting number TV talking heads assure us that he has.

Some part of the math is out of whack, and the public deserves to see the election officials check their work, before we accept the ‘Resistance’ shoving their pick down our throats.

Four years ago, they were the first to accuse the system of being riddled with abuse. Now that there is actual evidence to support that theory, they now suddenly believe elections are tamper-proof?

Who do they think they’re kidding?

They really think we’re going to take this laying down, don’t they?