There’s a very simple and obvious reason Trump could not have incited the violence, one that has nothing to do with what he has said, and everything to do with WHERE and WHEN he said it.

The connection between these points is so simple a child could follow it — maybe even Nancy Pelosi.

For Trump to have incited violence in a crowd, that crowd must have heard what he had to say.

That makes sense, right? And it won’t require any complex explanation?

If they weren’t part of the crowd, there’s no sense in Democrats and media blaming the crowd of protesters.

If the attackers left before Trump addressed the crowd, their reasons for busting up the place must have been something OTHER than what the President said to supposedly ‘incite’ the crowd to violent action.

The other consideration is the distance between where the speech was given, and where the criminal actions took place.

Now that we’ve set up the elements in tension, here is Raheem Kassam to present his argument for why Trump could not POSSIBLY have incited violence on the 6th of January.

Here’s a convenient chart for the timeline. 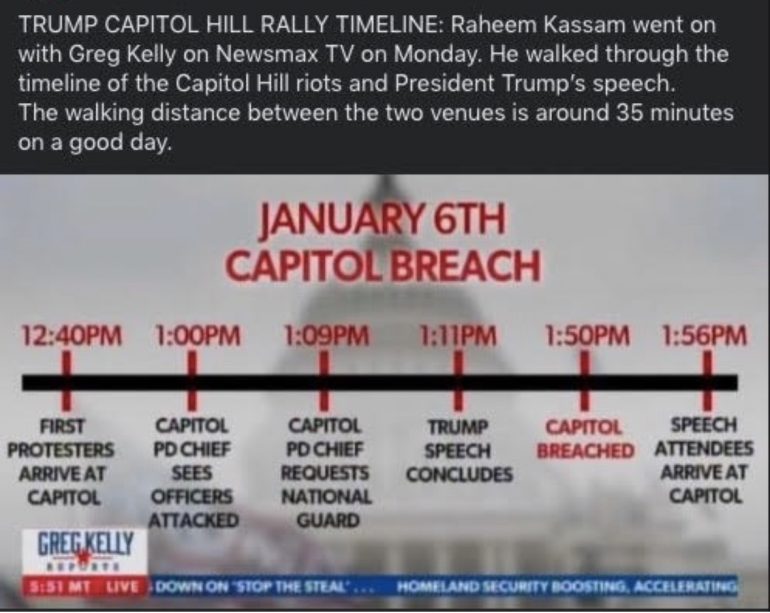 The website he refers to explains in more concise detail:

And while the Washington Post clumsily attempts to blame President Trump for the violence – despite the President calling for “peaceful” protests and the “cheering on” of Congressmen – their own article admits the “first wave of protesters arrived at the Capitol about 12:40pm.”

President Trump’s speech didn’t conclude until 1:11pm, and with at least a 45-minute walk between the two locations with crowd-related delays, that would put the first people from Trump’s speech at Capitol Hill no earlier than 1:56pm – a full hour and sixteen minutes after troublemakers arrived.

In fact, rioters who breached the perimeter would have had to leave before Trump’s speech even began (at 12pm precisely) to make it in time for the events as they are detailed by authorities.

The Washington Post also states: “Sund’s outer perimeter on the Capitol’s west side was breached within 15 minutes,” meaning the Capitol was breached over an hour before Trump speech attendees could have even begun to arrive.

This correlates with Sund’s interview, where he admits: “I realized at 1pm, things aren’t going well… I’m watching my people getting slammed.”

Again, 1pm would have been a full 56-minutes before any Trump speech-attendees could have begun arriving, let alone breaching the perimeter and clashing with police. Downtown Washington, D.C. roads were closed. There was no way of arriving faster, let alone before the President had finished speaking.

At 1:09pm, still before the President had finished speaking, Sund called the Sergeants-at-arms of the House and Senate. He told them it was time to call in the National Guard. He even said he wanted an emergency declaration. Both, however, said they would “run it up the chain” and get back to him.

At 1:50pm the Capitol itself was breached. Still before most Trump speech attendees could have arrived. –TheNationalPulse

He’s calling out the official narrative. That takes guts.