Coronavirus is giving Joe a lot of cover to mess around with all that ‘fundamental transformation’ that Obama couldn’t quite bring to fruition.

And like so many tinpot tyrants before him, raw political power is NOT something he is in any hurry to put back in the hands of the people. If he can keep us convinced that we are in a War Footing, in our Fight Against Covid, his step-and-fetch media will happily do the rest. After all, fear drives ratings.

They will busy themselves with keeping us terrified and looking to that great big benevolent god called ‘Government’ to save us from the peril that so threatens our souls.

Leftists have long envied the ability of leaders in places like China to roll out policy agendas without worrying about such trivialities as ‘public opinion’, legal precedent, or ‘checks-and-balances’.

Leftist poster boy (and occasional wearer of blackface) Justin Trudeau was once caught saying the quiet part out loud. He explained why he admired China’s ‘basic dictatorship’.

Oops. But when you look at Trudeau’s reasons, they look an awful lot like Biden’s flurry of Executive orders or the aggressively socialistic regime that Schumer, Pelosi and others are trying to shove down our throats despite the madate America gave Congress was explicitly ‘middle-of-the-road centrist.

Dems are so excited by what they CAN do, they’re not concerned about what they SHOULD do. And that is expressing itself with the goal-post moving we see with COVID.

The news is that by the end of July, America will have had enough vaccine doses to cover 300 million people. That’s good news, right? A light at the end of the tunnel?

Now we’re being told that these 300 million aren’t going to cut it. We’ll have to wear the masks until next year (at least). He was also wringing his hands about ‘new strains’.

There’s a problem with Joe Biden’s Fear-Till-Next-Year rationale. More than one, in fact.

It’s the Holy Grail in putting this whole nightmare behind us. When we have that, the contagion can’t rip through our vulnerable communities, overwhelm hospitals, or (especially) ‘kill granny’.

If some 300 million people are vaccinated by July, among some 332,209,508 Americans that takes us a shade above 90% vaccination. That does’t even account for anyone who has acquired immunity due to having contracted the virus and recovered which is currently around 12 million, and can only trend higher in the intervening months.

Even the Wizard of Covid himself, Little Lord Fauci would not be so bold as to say herd immunity requires MORE than 90%, would he?

Fauci indicated that he based his shifting statements on public polling on the popularity of coronavirus vaccines.

“When polls said only about half of all Americans would take a vaccine, I was saying herd immunity would take 70 to 75 percent,” Fauci said. “Then, when newer surveys said 60 percent or more would take it, I thought, ‘I can nudge this up a bit,’ so I went to 80, 85.”

He continued: “We really don’t know what the real number is. I think the real range is somewhere between 70 to 90 percent. But, I’m not going to say 90 percent.” —FoxNews

As recently as Feb 11, reports had Fauci projecting ‘herd immunity’ by the ‘end of summer’. (Not that we can put too much confidence in Fauci’s official position on anything. It shifts more frequently than a prairie wind.

He wants us to think the variant strains of the CCPvirus are an entirely new front in his war against the virus. That is a statement based in fear, not fact. From feedback vaccine providers have been giving us thus far, the vaccines have been helpful against all of the current strains. This is nothing more than pumping up a fear response to make the public more receptive to over-reaching control.

Even the studies that show mask use being somewhat effective in preventing the spread do so with an asterisk. ‘under ideal lab conditions’. This study about double-masking shows the difference between ‘fitted’ masks and regular use. Buried in that article we noticed a familiar theme:

The findings “highlight the importance of good fit to optimize mask performance,” the authors wrote in their paper, published Wednesday (Feb. 10) in the CDC journal Morbidity and Mortality Weekly Report. “Until vaccine-induced population immunity is achieved, universal masking is a highly effective means to slow the spread of SARS-CoV-2 [the virus that causes COVID-19],” along with other measures such as social distancing, they said. — LiveScience [emphasis added]

That line right there invalidates any scientific justification for Joe’s belief that masks must be worn until 2022. But do lecture us more about ‘following the science’.

For some more data that leftist panic-merchants won’t want us to discuss, let’s look at the side-by-side results of two very different approaches to the Pandemic.

We have a Red State, who — by the media’s ‘conventional wisdom’ has been reckless, ruthless, and downright stupid in their reponse to the spread of the virus. On the other hand, we have a Blue state that has been aggressiveley applying every single strategy dreamed up by ‘experts’.

With Florida returning to more-or-less normal life months ago, while California continues to labor under serious lockdown protocols, let’s check in on how things have been working out.

And no one in media cares pic.twitter.com/F96apOWuZw

This was back in December, before vaccinations started ramping up… 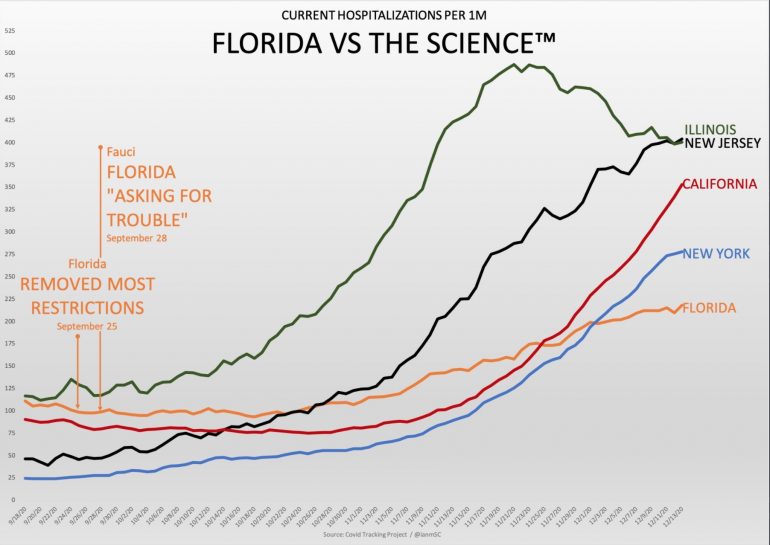 Alright, how about an apples-to-apples comparison within Florida? 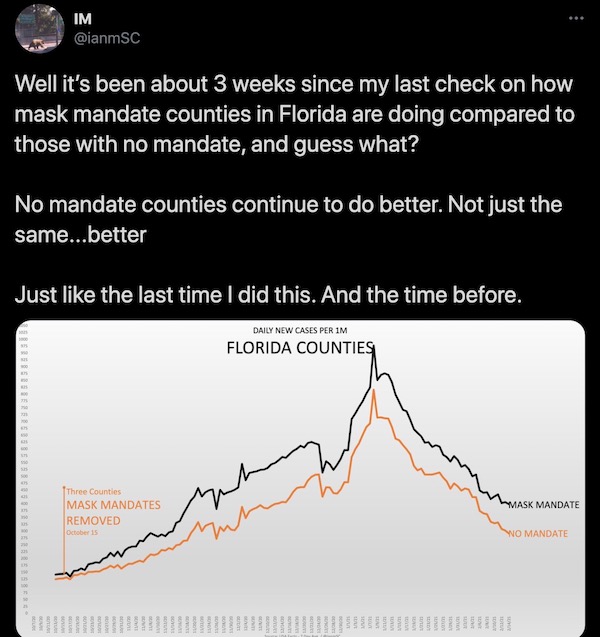 Surely one of these other comparisons will prove the conventional wisdom correct, right? 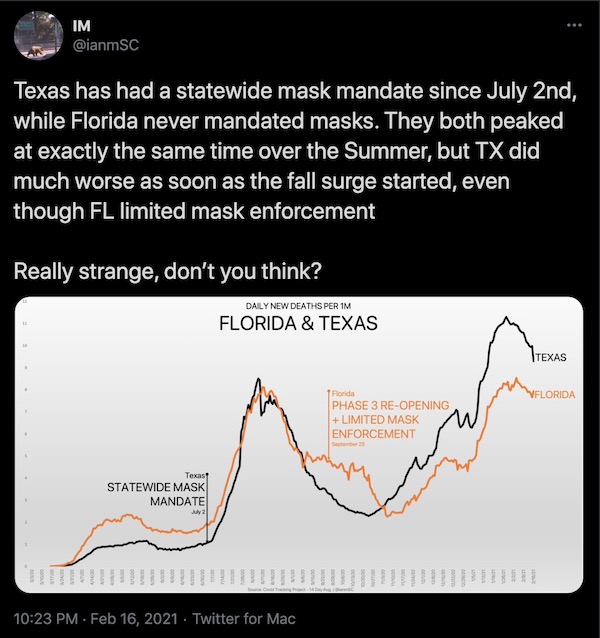 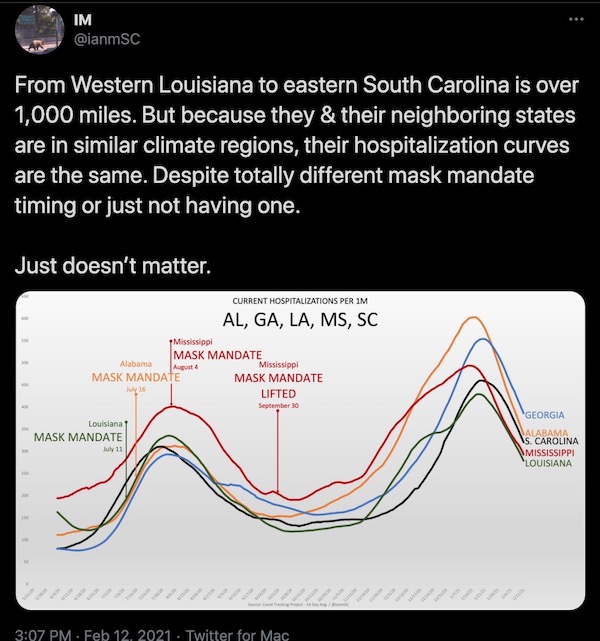 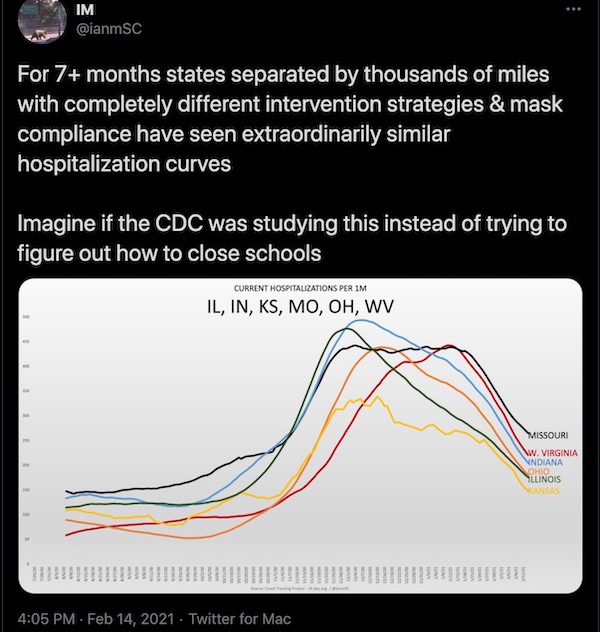 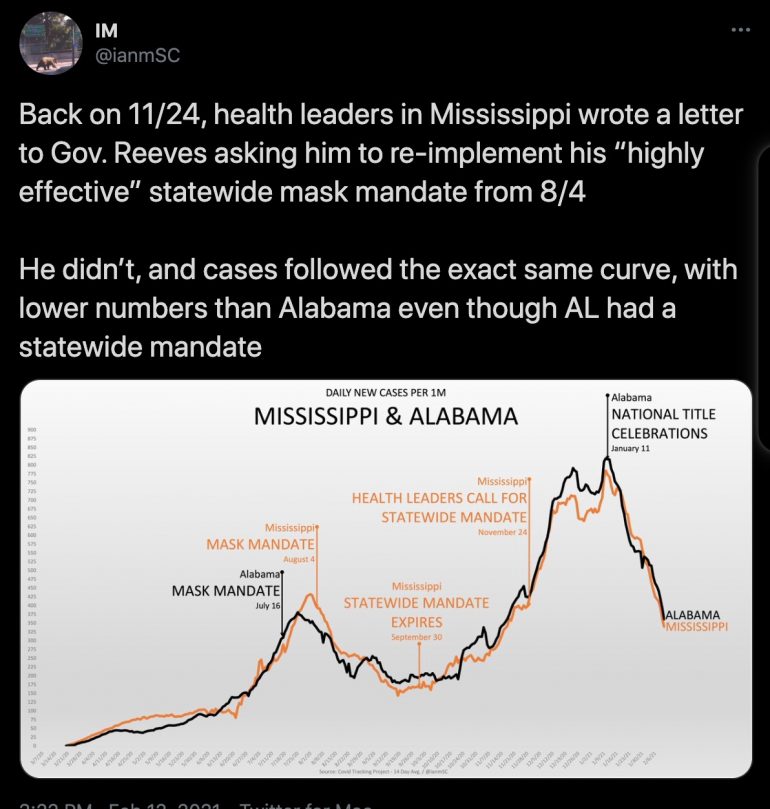 I suppose we should just ignore all that data and do what Biden says, and ‘follow the science’. After all, politicians are only ever concerned about looking out for our best intersts.

That’s how this works, right?